Startling revelation from the picket line as hundreds of health staff begin a week of industrial action. 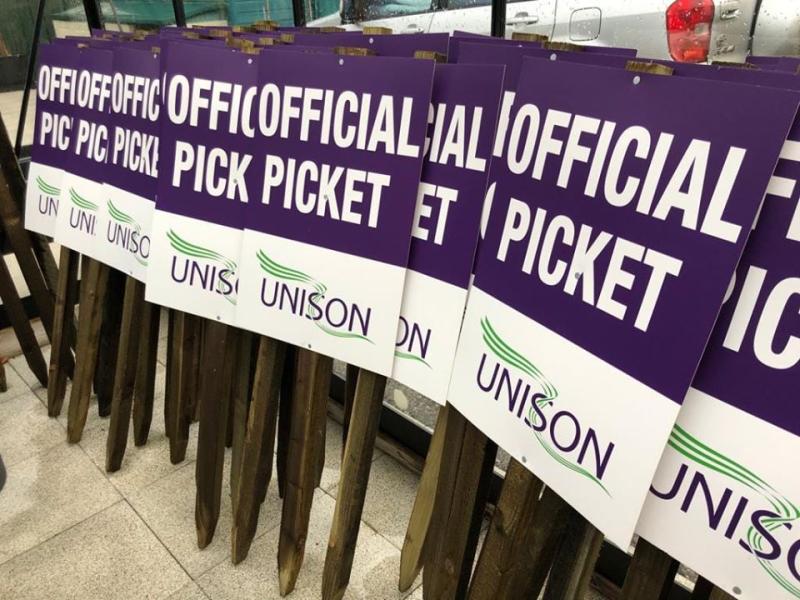 A number of services will be affected this week by industrial action taken by health care workers and Unison members,

SOME health service staff in the Northern Health and Social Care Trust are being forced to use food banks to feed their families because they are so badly paid, a trade union represenative said yesterday.
The comments were made as industrial action over pay and staffing levels got underway at hospitals across Northern Ireland on Monday.
More than 25,000 health workers including nurses, social care staff and support services staff will be taking part in the action which is to last until December 18.
Health services across Northern Ireland are to be further disrupted today as the action escalates. More than 200 staff will be on the picket line today at Antrim Area Hospital.
Around 25 sterile services staff picketed the hospital yesterday from 8am.
Industrial action by transport workers will hit services today and adult centres in Magherafelt, Maghera and Cookstown will close as staff join the picket.
Unison northern branch chairperson Stephanie Greenwood said the action by the transport workers will disrupt services including blood and medicine deliveries.
She said health service workers have been left with no alternative but to take industrial action because of the pay disparity with colleagues in other parts of the UK. “They have been left behind in terms of the pay structure. They are earning considerably less than their counterparts in Scotland for the same jobs and the same job descriptions. They can’t feed their families. They are using food banks. They can’t get from one payday to the next at the minute.”
The workers have been insulted by the pay offers that have come from the Department of Health, she said.
“The devolved government has failed them, the Department of Health has failed them and their employers have failed them. We are calling on the Department of Health to go and demand more funding from the Treasury to fund a decent pay offer.”
Patients and service users joined the picket lines at Antrim Area Hospital yesterday and there has been tremendous support from the public, she said.

“The workers are serious about keeping this going and they are serious about escalating it,” she said.
“This is going to have a big impact. It is going to impact widely and it is going to grow and grow and grow.”
Talks between the health unions and the Department of Health ended without agreement last week.
Department of Health permanent secretary Richard Pengelly said the pay offer was the best that could be afforded under budgetary constraints.
He said the trusts have developed contingency plans to mitigate potential disruption as much as possible.
"While we believe that the trade unions will do all they can to avert adverse impacts on services resulting from industrial action, potentially we are entering a situation where none of us can predict what the consequences might be," he said.
In a statement released late yesterday, civil service leaders spoke of their "deep regret" that trade unions are proceeding with industrial action in the health and social care system.
Department of Health Permanent Secretary Richard Pengelly said: “Intensive contingency planning is being undertaken to mitigate the impact of industrial action on patients and other service users.
“It is nevertheless inevitable that there will be an impact on patients. This has been publicly acknowledged by the trade union leadership.
“I can assure everyone that the Department did everything in its power to prevent industrial action. This included a pay offer that would add 2.1% to the pay bill for Agenda for Change staff.
“In addition, we proposed an independently-facilitated process to develop longer term solutions on pay and staffing issues in nursing and the wider HSC workforce.
“The budgetary pressures on health and other parts of the public sector are very well known.
“In the absence of Ministers, Departments are constrained in the actions they can take. We continue to face unprecedented challenges in Northern Ireland and we trust trade unions appreciate that public servants in the civil service are trying to do their best in a very difficult situation.”
The Head of the Civil Service David Sterling said: “Together with my Permanent Secretary colleagues, I am very aware of the deep frustrations in public sector workforces.
“This reflects many successive years of budgetary pressures and pay restraint. The frustrations are very evident in a number of sectors and it is a matter of great regret for us all to see discontent of this level among colleagues.
“There are no easy fixes in our current situation to these problems but dialogue offers the best way forward.”