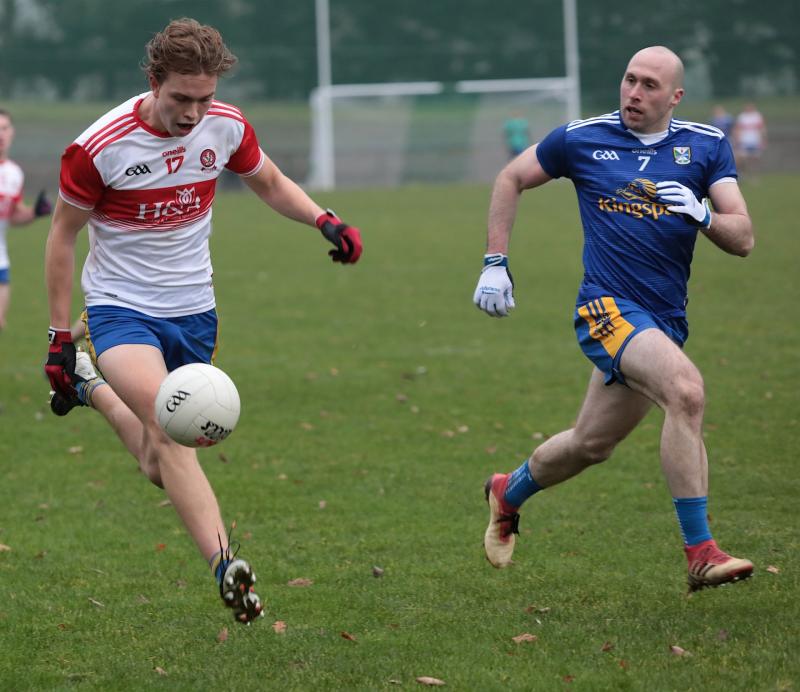 It’s not quite accurate to say that at the minute it feels like everything that Donncha Gilmore touches turns to gold – maybe more that it turns to silverware!

The teenager is currently loving every moment of what has been a season that he probably could never have imagined possible.

Almost two years ago, Gilmore suffered a cruciate ligament injury that looked set to rob him of a run with the 2020 Derry minors. But Covid-19 meant a delay in the Ulster competition and, fast forward to the summer of 2021, and the Steelstown man played a key role as Marty Boyle’s team got their hands on the provincial title. The best was yet to come though, after a win over Meath set up a thrilling All-Ireland final with Kerry. Perhaps the only downside was that restrictions meant that the game didn’t take place in the usual setting of Croke Park in front of a rousing crowd, but instead at Tullamore in front of 500 as Gilmore wrote his name alongside club mates Paul O’Hea and Marty Dunne as Tom Markham Cup winners.

And yet, just seven months later he will get his deserved day in GAA headquarters. It’s an opportunity that the versatile young player is relishing.

“I definitely thought that last summer was the time when I would get that chance to play in Croke Park, but thankfully it has been a brilliant year with Steelstown and for myself personally, having not gotten the chance with Derry, it really increased my desire even more to get through to this All-Ireland final and to play at Croke Park with the club,” he explained. “I’ve had texts from the boys on that Derry minor team saying that obviously it’s brilliant to be in the final in the first place but how special it is that we’ll get to play in Croke Park as well. I suppose you just don’t know if you’ll ever get the chance and I’m just grateful that I’ll have the opportunity now on Sunday.”

While many of the teammates he will play alongside on Sunday have experienced more than one heartbreak on the road to this infamous season, it has been quite the opposite for Gilmore – infact, he has a 100% championship game-winning record with the Óg’s senior team. It’s clear to see how the addition of some fresh faces in recent years has really elevated this squad from Derry championship contenders to county and Ulster winners - and All-Ireland finalists - and he agreed that it is a strong blend of youth and experience.

“After every game I’ve been getting plenty of stick about my record for my first season,” he laughed. “But as someone who has watched the older boys in the team for years and seeing them come so close and fall at the final hurdle, it’s tough.

“I think we have a great mix of youth and experience in the team and I’d definitely say that some of the new faces coming in has really changed things. The younger players like myself don’t have those same experiences of losing and we don’t really have any bad habits that maybe would have developed in previous years.

“Even looking at the Na Gaeil game when we went down to 14 men, I think some teams before us could have started panicking or kicking loose passes. For me, what we have achieved so far this season shows how this team has developed and how balanced the squad is.”

And while he is playing alongside some teammates who are ten or more years his senior – including the likes of captain Neil Forester who coached Gilmore as a primary school pupil – the 19-year-old believes there is a strong bond in the squad where every player helps one another.

“As a group we have a really strong bond and we all get on so well. I think that has helped us a lot not just on the pitch, but in training as well,” he stated. “If one of us feels that another player is making mistakes or needs to change something, we’re not afraid to say it. It’s down to the camaraderie that we have, that we can use that to make us all better players and nobody is going to get offended or annoyed. We’re all working together towards the same goal.”

And it’s not just about Donncha. The trophy cabinet at the Gilmore residence is already filling up fast, with sister Niamh also bagging a county championship medal this year and coming agonisingly close to an Ulster intermediate title with the club’s ladies’ team. They are just one example of a family who typifies the spirit of community at the Ballyarnett club.

“You see with every game that we’ve played that most of the teams in the club are represented – kids from the underage teams, the ladies’ team, everyone. For me was well seeing some of the former players - who you would think might be looking at us with envy – standing on the pitch afterwards with the biggest smile, that really drives me on,” he admitted. “It just makes you want to make it happen even more, not just for yourself or your own family but for all those boys and everyone in the club who is supporting us.”

Now Gilmore waits as the final days tick by on the countdown to Croker. The pre-game feeling of an All-Ireland final is one he has experienced before, but when it comes to the club, it means that little bit more. All they can do now is trust their preparation and focus on leaving everything on the pitch.

“The whole team knows that we are physically ready for what’s ahead, we’ve done the work and we’re prepared. For a lot of us, myself included, it’s now just about the mental side of it. We’ll keep looking at this Trim team and getting ourselves in the mindset of what is ahead.

“We have taken every game as it’s come and this is no different. We’ve overcome a lot of brilliant teams so far and I think our game has just risen every time so hopefully we can get over the line on Sunday.”