Four qualifers down for decision 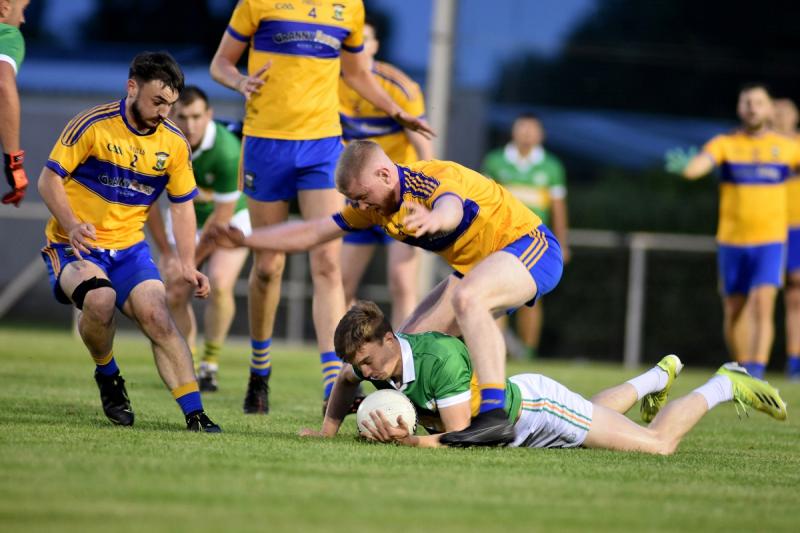 In this weekend's intermediate championship schedule, it's all about getting eight teams down to four ahead of the quarter-finals later this month.

Limavady v Ballymaguigan
Thursday (7.30) - Owenbeg
Referee: Kieran O'Connor (Slaughtmanus)
The first game of this this weekend's action is a repeat of last year's clash at the same stage when Limavady were convincing winners to knock Ballymaguigan out of the championship.
When the sides met in last month's group stages, it was a gripping contest won by Sheagh McLaughlin's late thunderbolt to the top corner of the 'Quigan net, as a Cormac Quigley inspired Limavady came out winners again.
Ballymaguigan lost out to Lissan and played second fiddle to Steelstown's blue wave in their final game.
Daniel Bradley should be back this weekend after missing the game with illness.
Michael Spiers made himself an outlet in attack and Shea Bradley battled well at midfield, but they will need another big performance this week.
Limavady should have Oran Hartin back between the posts this weekend after John Deighan's cameo in the last round. Karl Diamond and Fabian Muldoon will hope that Conor Boyd is fully fit to start after his substitute appearance against Lissan. His bravery, use of the ball and positional sense will bring stability to their defence. Not to mention his experience.
They'll have to keep an eye on Paudie Martin in attack after his three goals in as many games. It will be interesting to see if Ciaran McIvor and Darren Conway are included from the start, or kept in reserve for when the game opens up.
Limavady won the sweeper battle, with Kieran McGlinchey imposing himself on their counter-attacking game, with Tomás Brady overworked and being the third marker Cormac Quigley went through on the night.
Thursday will be about whoever can make the wide open spaces their friend and the Wolfhounds may be better equipped and their goal threat could see them into the last eight.
VERDICT: Limavady

Glenullin v Slaughtmanus
Friday (7.30) - Celtic Park
Referee: Gregory McWilliams (Ballinascreen)
Glenullin's inconsistent season arrives at the final fork in the road on Friday night at Owenbeg as Liam Bradley's side put their championship cards of the table. There are no more chances. This is championship as we know it and standing in their way is a Slaughtmanus side they defeated (3-12 to 0-10) five weeks ago in the group stages.
The Glen's narrow defeat at the hands of Castledawson was followed by a disappointing performance at Faughanvale, a game they never got to grips with.
In the absence of Eoin Bradley, their young guns of Fearghal Close and Michael Óg McKeown asked a lot of Castledawson's defence, with Neil McNicholl also a welcome return. They will be without 'Skinner' who will be on duty with Coleraine.
The 'Glen have found an excellent 'keeper in Sean McKinney, behind a defence backboned by the O'Kanes. Ronan Close, Traglach Bradley and Brian Mullan will provide their midfield spine.
Slaughtmanus could again be without Conor McGee, Gavin McShane and Eoghan Cassidy, but the have still been able to create chances. All they need is a day when their threat clicks and the net is bulging rather than another day of regrets and head scratching. Their clash with the 'Vale would've been oh so different had they taken even one of their goal chances when they trailed 0-7 to 0-5.
Goalkeeper Conor Thornton has return, but they'll nee to maximise their output from Caolan Hargan and Killian Thornton up front, with Kyle Gallagher pulling the pieces together.
A tight game in prospect, with Baker's side to come through.
VERDICT: Glenullin

Lissan v Glack
Saturday (2.15) – Glen
Referee: Dan Mullan (Glenullin)
Two years ago, Glack were in flying form on their way to the junior title, but have since lost their mojo and have trudged their way though the season in Division 2.
Lissan, while playing in a higher division, failed to win a game, but they gave plenty of teams trouble. Their one-point defeat early in the season to eventual champions Drumsurn showed the promise they have.
Former Derry minor captain Iarlaith Donaghy has been their consisitent cog all season and he kicked four points in their defeat at the hands of Limavady.
They will take confidence from their win over Ballymaguigan into Saturday's trip to Glen.
Glack have good performances from Ryan O'Kane, Martin McGonigle, Ryan Morgan and Adam O'Kane for much of the season. Adrian McGilligan's side had the league win over Ballerin, in which they denied the Sarsfields the title, as a sign of they can do. But with too much reliance on Niall McGOwan for scores, it leaves Lissan with a target – stop him and they could repeat their 2020 season and nip a spot in the Quarter-Finals
VERDICT: Lissan

Castledawson v Doire Trasna
Saturday (2.15) – Dungiven
Referee: TBC
A team we know much about and will be contenders for the biggest prize on offer next month against Doire Trasna who haven't got going. Literally.
Their two concessions against Greenlough and Drumsurn raised a few eyebrows across the county. Covid, players away at college and injuries combined into their reasoning for not fielding. It leaves them totally undercooked for a game they'd have been facing an uphill battle with even their full compliment of players.
Eoghan Quigg, Micheál McNaught and Colin Murray have been their key men in attack in recent times, with Tomás McCrossan their anchor in defence and Paul Quigley at midfield.
In recent times their management duo have had to get the boots on and their lack of collective training doesn't bode well ahead or Saturday's encounter.
'Dawson manager Niall Jackman admits to using the league to blood new players, with the view of drawing up a side later in the season. Players like Niall Rafferty in their defence. And that time is now.
They can count themselves unlucky not to get something out of their group game against the 'Vale at home and they dug deep to see off Glenullin.
The return of Niall Keenan has been a welcome addition and Niall McNicholl is in the form of his life, having got himself into great nick.
Jackman will have to guard against complacency, but it's hard to make a case for anything other than a Castledawson win.