Mickey Kennedy was an encyclopedia of local knowledge 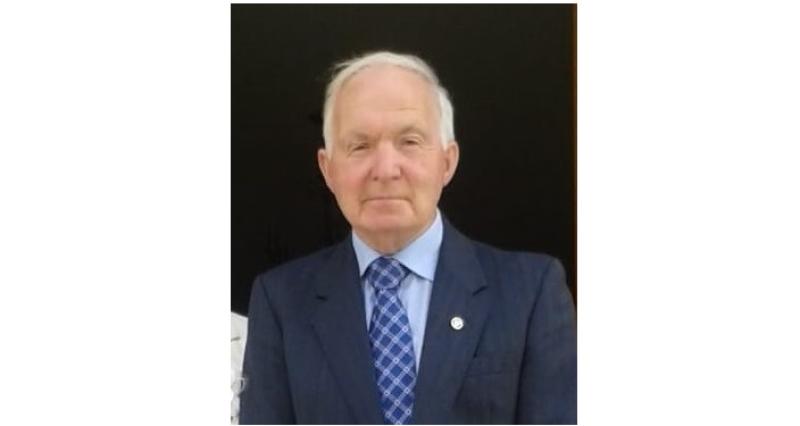 County Derry said a fond farewell to a man of modesty, a perfectionist and a walking encyclopedia of GAA on Sunday in St Mary's Tamnaherin, following the passing of Mickey Kennedy.
Also known by many as Mick, he passed away suddenly on Thursday, aged 83.
Born in Fallalea, outside Maghera, he moved back to his family roots in Moneyneana, Ballinascreen when he was 14. Mickey attended St Columb's College, as did many from the south Derry area in those days.
Like his siblings, he had a keen interest in all things GAA but his playing career was cut short following a serious motorcycle accident at the age of 17 years leaving him in a coma for six weeks.
On his recovery, he worked as a shop man in Ballinascreen and later in Dunloy so was well known to many in those areas. Mickey and his wife Nan later ran the shop in Moydamlaght, Moneyneana.
After a number of years living in Magherafelt, to facilitate work in Enkalon in Antrim, Mickey returned to his beloved wife Nan's roots in Tamnaherin where they continued to raise their family.
At his funeral, Fr McDermott noted that the gospel message of modesty was very apt with how much pride and love he had for his family.
He was the loving father of Marie, Brian, Martin and Carmel, father-in-law of Fiona and Bronagh, the much loved grandfather of Lorcan, Darragh, Conor, Kian and Shea, son of the late Thomas and Mary and dear brother of Patsy, Margaret (Loane) and the late Tommy and John.
Mickey's other love of GAA continued throughout his long life and he travelled the country to watch Ballinascreen, Slaughtmanus and his beloved Doire, often accompanied by family and friends.
On hearing of his passing, a friend said "Mickey was a wonderful character. A true Gael. He never forgot his Ballinascreen roots. We will all miss him."
Like all Derry Gaels, his best memory was the county's 1993 All-Ireland triumph.
Slaughtmanus paid tribute to him saying "Mickey was a lifetime member and stalwart supporter of the Slaughtmanus GAC club, he was very knowledgeable about all things Gaelic football. He would always stop to talk to any fellow Gael about weekly results and news from teams and clubs around the county"
Mickey is my wife's uncle and I can vividly remember our first conversation, a Sunday evening call to check the day's results, performances and talking points. It didn't take long to realise he had a photographic memory. No detail was ever missed.
“What Mickey didn't know was not worth knowing. a great and interesting conversationalist,” commented local GAA writer Bernie Mullan to me.
In his later years Mickey worked in the car parks in Derry City, a role that allowed him to chat to many people, often leading to a few queues at the exit.
When Derry released a yearbook in the mid-eighties Mickey penned an article on his memory of attending the final in Dublin, entitled: ...and they even came from Tobermore. The detailed account of before and during the match captured the emotions of the day with even a horse and cart forming part of the journey. 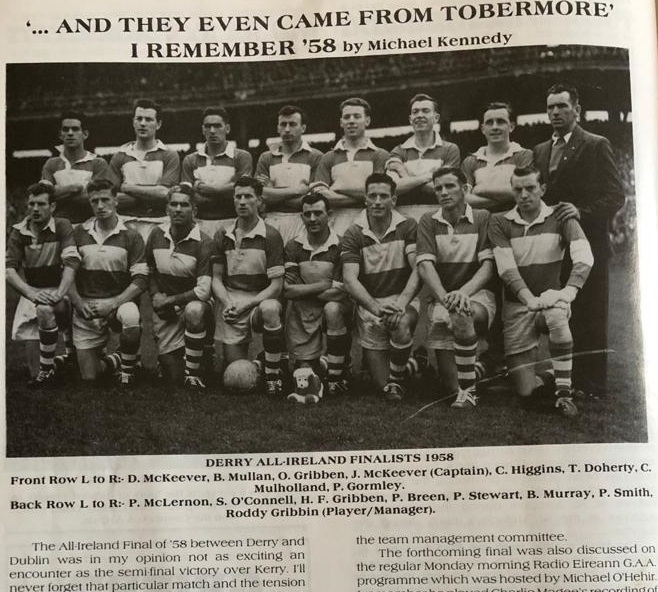 An clipping of an article written by Mickey about the 1958 All-Ireland Final.
Coming out of Owenbeg on Sunday night, Ballinderry stalwart Pat McGuckin spoke of Mickey's memory and knowledge for GAA, informing me of how he could recite – by heart – the dates of birth of Derry's 1958 team who reached the All-Ireland final.
Mickey's self built garden sheds were a treasure trove of newspaper clippings, photos and video tapes of matches, encapsulating his love and passion of all things GAA.
Mickey also had a love of gardening with the family home always in pristine condition, with lawns and hedges manicured to the last detail.
His gardening skills were well utilised during his time working with Martin Dolan laying lawns and gardens on many new housing developments in the Eglinton area where his legacy will live on.
His family will miss him dearly, but the memories and esteem in which he was held is a hand of comfort.
A gentleman. A life well-lived, who is now, as Fr McDermott pointed out, walking through the garden of heaven.