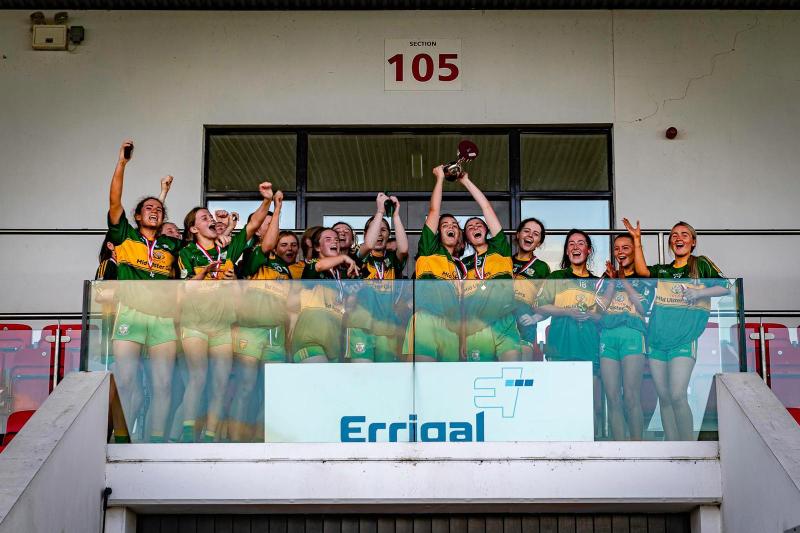 Ballymaguigan won an exciting Derry U19 final against Magherafelt on Sunday afternoon.

DERRY U19 LADIES A CUP FINAL

Ballymaguigan 2-11
Magherafelt 2-8
A wonder goal from Eimear Stuart won this enthralling game with virtually the last action at Owenbeg.

It was a cruel blow for Magherafelt who twice battled their way back into the game, only to be left empty-handed with extra-time on the horizon.

Points from Niamh O'Donnell (2) and Jeanette Slevin had the Rossa girls three points ahead before the 'Quigan registered their first score.

Shannon McKenna and Kayla Letters scored points as Ballymaguigan settled into the game. The sides were level, 0-4 each, at the start of the second quarter.

Ballymaguigan pushed into the lead before Magherafelt hit the game's first goal. Niamh O'Donnell found herself in possession in front of goal, but was closed out by great defending. She didn't panic and eventually spotted Anna Donnelly in the clear, who had the composure to sidestep goalkeeper Alisha McClenaghan and finish to the net, for a 1-4 to 0-6 lead.

Kayla Letters levelled the game at half-time. After the break, the game was finely balanced until Ballymaguigan found the net again. Kate Connery was sharp to pounce on a loose ball after Kate Gribben played a pass from midfield.

Niamh O'Donnell (2) and Anna Donnelly replied with Magherafelt points and were back in the game, trailing 1-10 to 1-8.

The game took another twist when Jeanette Slevin's run through the centre set up a goal for Eva Small at the far post and it was advantage Rossa.

Kate Gribben tied the game and it looked like extra-time would be needed to separate the teams until Stuart's magical winning goal.

Early goals put Claudy on track for victory over Coleraine

Craigbane scoring power the difference in title decider with Lissan