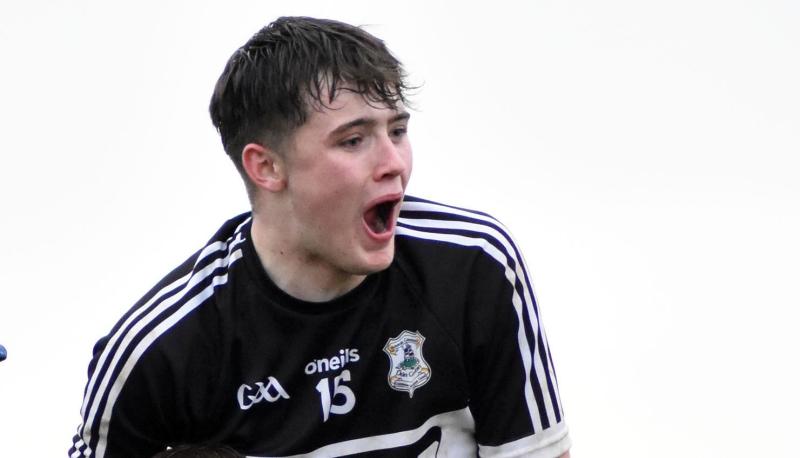 Cahir Higgins was one of Dungiven's goalscorers against Glenullin. (Pic: Mary K Burke)

Two goals in the last ten minutes helped Dungiven to victory at Glenullin in Friday night's penultimate league game and keep Stephen O'Neill's men in the hunt for the league title.

Dungiven 2-12
Glenullin 0-11
It was a victory crafted by four half-time substitutions and how O'Neill changed the shape of his team.

With Dermot O'Kane in sharp form up front and Sean McKinney working his short kick-outs with precision, Glenullin controlled the first half.

The home side put an intense press behind midfield, closed Dungiven down and hit them on the break.

It worked a treat and Glenullin led 0-8 to 0-5 at the break, with O'Kane kicking five points.

A different Dungiven emerged for the second-half.  The influential Marty Burke came out to play at centre-forward.  Dungiven played with a defender less and pushed Paddy O'Kane to a more central midfield area.

Ciaran Mackle came into the side and Kevin Johnston pushed forward, with Seamus McCloskey and Daire McKeever coming into the attack.

With James McKeown winning three breaking balls at midfield on McKinney's longer kick-outs, Glenullin seemed to have weathered the storm and were two points clear with two Dermot O'Kane scores.

Johnston, Marty Burke and Darragh McGilligan all kicked points as Dungiven levelled matters, 0-11 all, with 49 minutes on the clock.

As the clock ticked into the last ten minutes, the game changed for the last time.  Glenullin hadn't registered a score since Dermot O'Kane's eighth point in the 45th minute.  The next score would tell a lot and in terms of how Dungiven turned the game, the next possession would be vital.

A Glenullin kick-out was intercepted by Cahir Higgins, but an off-balance Ciaran Mackle pulled his shot wide.

Then came the score that broke Glenullin's resolve.  A Kevin Johnston pass found Seamus McCloskey in space, behind the defence with only the goalkeeper to beat.  After sidestepping McKinney, he slotted home the game-changing goal.

Soon the Glenullin net was bulging again.  Conor Murphy and Seamus McCloskey were involved in the move before Cahir Higgins blasted to the roof of the net, followed by an Odhran McKeever point to seal the win.