A player by player look at the Oakleafers' performance 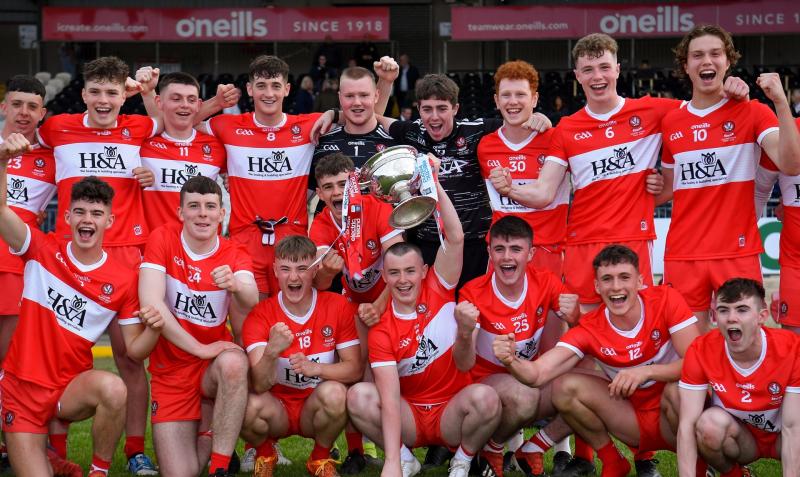 Derry minors were 1-14 to 1-7 winners over Meath in Saturday's All-Ireland MFC semi-final.

Here is a player by player look at their victory.

K McGonigle – Did well to save Frayne's penalty and unlucky with the rebound. Mixed his kick-outs well in the first-half, but shanked a couple late on when the game was done and dusted.
A McGonigle – Kept Alan Bowden scoreless and was an option to carry the ball out of defence. Won two kick-outs over the game. Conceded a first-half free, but won one in the second half at the other end.
E McEvoy – A selfless performance and kept star man Frayne under wraps. Made a vital interception in the scoring zone in the first-half and got a hand to cut out one of Hogan's long kick-outs in the second-half that led to a Derry point.
C Shiels – Was up against John McDonagh and later Aaron Murphy, holding both scoreless. Guilty of giving away a couple of frees, but his strong running on the overlap was rewarded by a fine score before half-time.
D Gilmore – Once again, he threw himself anywhere and everywhere for the team. He was a great link between defence and attack. Kept tabs on Mark Coffey who got more freedom when moved to midfield.
P McGurk – Picked up Liam Stafford and put in a steady defensive performance. Involved in some of Derry's possession moves from defence. Unlucky to pull an early shot to the left of the post.
L Brady – Picked up the highly rated Ruairi Kinsella, who scored a point, but Brady did far more damage going in the other direction. He won three kick-outs and got a couple of shots at the posts himself.
D Higgins – A quiet first-half as Meath kept the ball away from him, but in the second-half he turned into beast mode again to make three marks, a defensive mark and got forward to kick Derry's goal.
P O'Kane – Derry's covering midfielder was again always filtering back to plug the gaps. Lost a ball that forced him to concede a free, but his ability to get in around the Meath attacks played a big part in shutting them out.
M Doherty – Another all energy performance and he managed to kick two points and had three assists over the hour. His marker Adam McDonnell got forward to grab two scores when the game was petering out.
M Downey – The skipper was the perfect example of what a playmaker should look like. Playing with his head up, he picked passes when they were on and carried the ball when they weren't. Had a telepathic link with Lachlan Murray and kicked eight points in the Derry cause.
J McDermott – Moved across to line up against Ciaran Caulfield who came into the game with a big reputation. Put in a massive shift in the middle third. Scored one point and looked like his second-half effort went between the posts.
C Diamond – His pass to Connor Shiels was the only Derry kick-pass assist of the game. Missed a difficult free early on and nailed his other effort in the second half.
N O'Donnell – Played as a link man around the middle and got on plenty of ball. Played the pass for Mark Doherty's second point and was unlucky to have a shot blocked by Adam McDonnell and goalkeeper Hogan.
L Murray – He was the definition of a handful. He didn't have enough support in the first-half, but his turnover on Liam Kelly led to a score. Could've had a penalty. Ran at Meath in the second-half, winning three frees. After having a late goal chance saved, his dummy saw him rewarded with a point from the rebound.
C Downey – Came on for the last 20 minutes. Passed the ball for Matthew's lead score within seconds and his block and pass made the goal for Higgins.
R McEldowney – Matthew Downey made a point for him in the Ulster Final and McEldowney returned the favour with a neat pass over the top in stoppage time.
J Moore – Brought in during stoppage time and forced a turnover that eventually led to Lachlan Murray's late point.