The Pearses maintain their unbeaten start 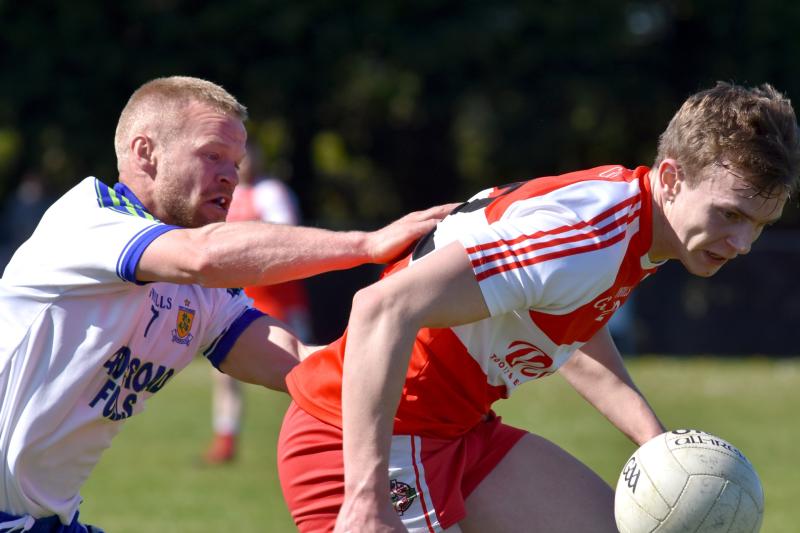 A Larry Kielt point, with the last kick of the game, saw Kilrea notch a deserved draw at Foreglen.

It was a dramatic week for the home side, who needed a mate Mark McCormick point to win at Glenullin on Wednesday night.

Kilrea led 0-3 to 0-2 after eight minutes with points from Rory Maguire and the Kielt brothers, Charlie and James.

Cahir O'Connor, who scored three goals in his last two games, and Kevin O'Connor were on target for the home side.

Kilrea struck the first goal of an exciting encounter. Larry Kielt won a kick-out at midfield before getting the ball to Daithi McLaughlin. After running at the home defence, his shot hit the post before he made no mistake from the rebound and Kilrea were 1-3 to 0-2 ahead.

Kilrea lost Peadar McLaughlin to a black card and Foreglen took full advantage with an unanswered 1-4 salvo, their goal coming in the 20th minute from Kevin Dunne, with Kevin O'Connor firing over three of the points.

James Kielt converted two frees as Kilrea found their feel, but it was Foreglen who led 1-9 to 1-5 at the break.

Niall Johnston had the ball over the bar in the first attack of the second-half before Kilrea were hit with another blow, a 32nd minute Liam Downey goal and Foreglen were six points clear.

Kilrea refused to throw in the towel and three Larry Kielt points from long-range saw them find their feet again. The sides were soon level, but it was a stroke of fortune for Kilrea when Niall Johnston's point attempt dropped into the net, making the score 2-9 each.

Johnston and James Kielt nosed Kilrea into a 2-11 to 2-9 lead by the 45th minute before they had Daithi McLaughlin sent off. Substitute Paddy Quigg and Larry Kielt kept Kilrea in the lead until Foreglen struck with their second goal and another for Kevin Dunne.

As the game entered the final minutes an Aidan Gillen kick-out led to a James Kielt equaliser before Foreglen looked to have won the game with a 64th minute Cahir O'Connor point.

Defeat looked on the cards for the young Pearses side, but after making a catch at midfield, Larry Kielt had the final say with a point from 50 yards to maintain their unbeaten start to the season.