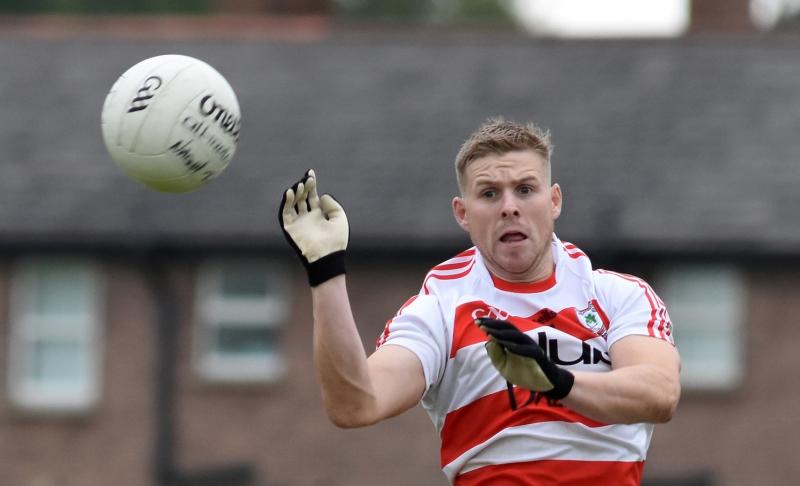 In an intense clash at Brolly Park, the home team Glack sprang a surprise when they came from five points down to keep Desertmartin scoreless for the entire second half. It was never the case of Glack being defensive in that period, rather they just stopped them from playing the ball out of defence with countless turnovers.

With a 0-7 to 0-2 interval lead the St. Martin’s looked to be home and hosed but this Glack team don't fold easily. Three quick points from Ryan Morgan, Adam O’Kane and Niall McGowan allied to Desertmartin losing the experienced Paul McGovern on a second yellow card left Glack in the ascendancy.

Colly Mullan was an injury doubt due to sustaining a knee injury in their defeat to Ballymaguigan, but he proceeded to give an exhibition of long range kicking.

Magilligan packed their defence in the first half forcing Ballerin to play wide on the wings and when they broke mainly through the impressive wing back Conor McFeely they looked dangerous.

Ballerin led by 0-6 to 0-5 at the break but Magilligan hit the first three scores of the second period through Conor Logue, Collie Mullan and Ethan McLaughlin to go two in front.

A brace of Gary Keane frees levelled the game and Ballerin began to open up the home defence. By the 50th minute a Ryan Doherty point had put them 0-12 to 0-8 in front but there was still a kick in Magilligan as frees by Colly Mullan and Eoin Kelly left just two between them.

In the last minute a Leigh Ferris effort came off a post into the hands of Eugene Mullan who was fouled in forbidden territory. Gary Keane’s penalty was well saved by Barry Mullan but the ball bounced back to Keane who tapped it to the net.

Dungiven 2-13 Moneymore 2-10
Moneymore led for a good portion of the first half but the Dungiven side had the last point to leave it level at half time 1-7 to 2-4, the winners goal came from the outstanding Niall McGonagle.

Moneymore rallied well in the closing stages but St. Canice’s held out for a deserved victory.

Tiernan O’Neill’s brace of first half goals in the seventh and 23rd minutes looked to have put Moneymore in a good position but that poor third quarter will come back to haunt them.

Dolan’s 0-12 Drum 0-10
Dolan's continued their good start to the season with a rare away victory.

Their better spread of scorers saw them edge out a weakened Drum team at Gortnahey in blazing sunshine.

Odhra McKane once again showed his quality as the Creggan men continue their unbeaten start to the season under new manager Ciaran Wilkinson.

Despite a brace of goals from full forward Cormac Quigley the Wolfhounds never reached their expected level.

Ballymaguigan were hit by a brilliant Quigley goal early on but they fought back to lead by 0-7 to 1-3 at half time.

Limavady resumed with three quick points to take the lead. Ballymaguigan got going again and hit the next 1-4 the goal coming from a Daniel Bradley penalty.

Despite Quigley’s second goal seven minutes from time the 'Quigan held out comfortably.

Doire Colmcille conceded their game against Craigbane due to injuries and unavailability of players.

Doire Trasna's game with Ardmore has been refixed for later in the season.