Derry must respect themselves to respect Limerick says Derry boss

Gallagher happy to have won against a 'serious team' 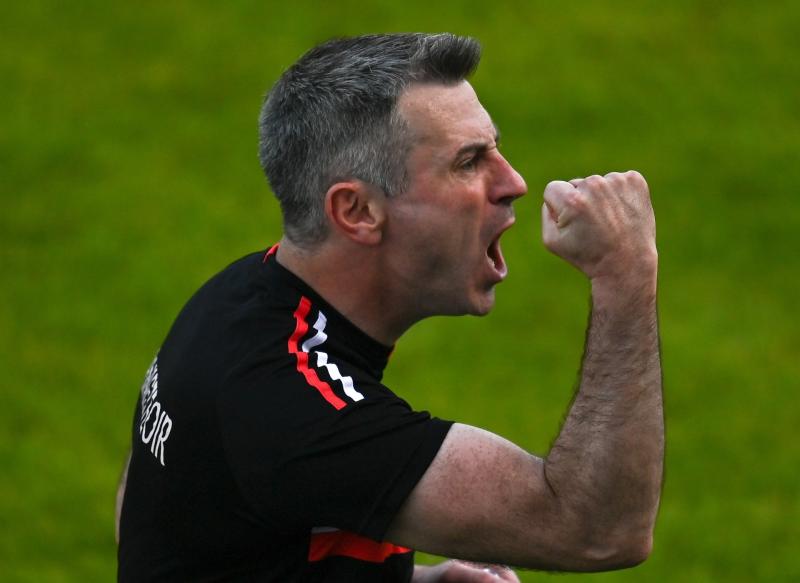 One glance at Derry's warm-up on Saturday and the intensity with how Rory Gallagher delivered his message to his side before taking on Cavan offered one word.

With over half an hour to throw in, and with the squad still to return to the dressing rooms to get their jersies on, Gallagher's voice left anyone among the handful of people in the stand in no doubt about Derry's mission.

The players, tightly bound, shoulder to shoulder, were getting revved up for battle.

They might've had both feet in the semi-final final, but with just 12 seconds gone, Gareth McKinless' run through the centre to set up the opening score, a McGuigan free to set the tone.

Fast forward two hours and with a third win secured, the focus was different. Getting the Derry players to the same mental height for their season-defining game with Limerick is the only show in town.

“Absolutely,” agreed Gallagher. “After we got the first victory (over Longford), and then the second victory (against Fermanagh)...that (semi-final) was going to be the game. As much as we wanted to win today, we want to win in two weeks a hell of a lot more.”

Now it's about gelling and pouring every ounce of energy into their next mission.

“The best way to respect Limerick is to respect ourselves, trying to prepare well and continuing to improve,” said Gallagher, who trained one night a week with Limerick in the mid noughties while he was working in the area.

Looking back on Saturday's win, it gives the Derry boss an assurance of where his side sit in proportion to the teams dining at the top table.

“We know we can compete with teams like Cavan, but we have to learn from it, from the naivety in which we let them back into the game,” Gallagher said.

“Even the lack of ruthlessness at finishing them off a bit earlier in the first-half. It is all about learning and we learned an awful lot today, far more than we learned in the previous two games.

“I can take some of the blame for that, I tell them when they break with an extra man, you have to go hunting for the goal and if you settle for the point well and good. Sometimes it doesn't work and we need to get better at reading that split second.”

Like his skipper Chrissy McKaigue pointed out, the Oakleafers' boss lamented a first-half that saw his side lead by a point, while feeling Derry should've hit the region of '2-9 or 2-10'.

Gallagher felt his side could've defended better on both Cavan goals, but backed his goalkeeper Odhran Lynch at how he recovered from Gearóid McKiernan nipping in to flick home the game's first goal.

“We are very fortunate to have him (Lynch),” Gallagher said. “From the minute I saw him, I felt he was the route we had to go. It wasn't easy on Postie (Thomas Mallon) or anybody else, he is a phenomenal talent.”

All during the first-half, Cavan – both in terms of a press and their sideline collectively shouting on every Derry kick-out – set their stall out to stifle Derry.

“That was going to happen after getting things all our own way (in the first two games). Cavan are a big team. That went with a big squeeze at times. Yes, it's learning. We rectified it well at half-time and you would hope the next day it happens you could rectify it on the field.”

When asked if winning the game on limited possession was a significant boost to their confidence, the Derry boss felt the step up in class was the most pleasing factor.

“It’s a game against a serious team. With all due respect to the lower divisions you're not playing teams of that calibre enough. We want to play teams like Cavan and teams like them more."