Gallagher happy to have close to a full hand for opener

Karl McKaigue could be in line for a start in Longford 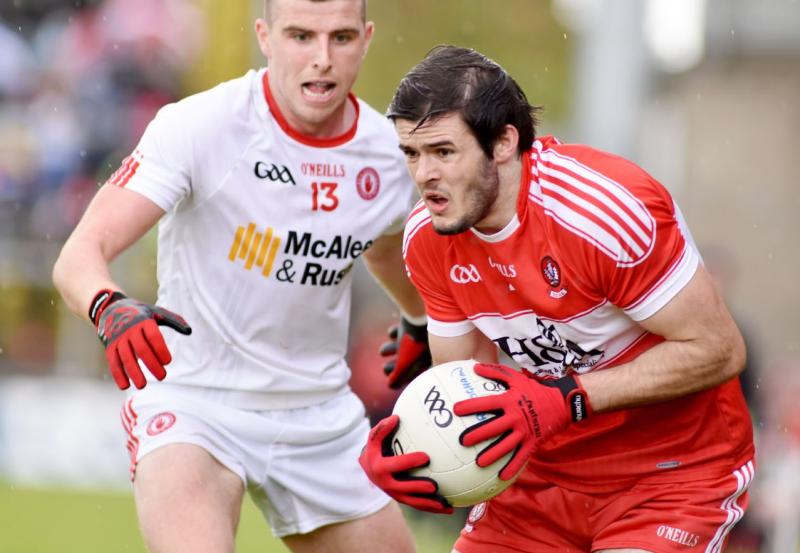 Derry manager Rory Gallagher believes Slaughtneil defender Karl McKaigue will be available for selection this weekend as Derry open their NFL campaign in Longford, with close to a full panel to select from.
An ankle injury at county training before the Leitrim league clash last January kept him out of Derry's season and a torn Achilles injury on hurling duty with Slaughtneil ended his club season.
“Karl has made an unbelievable recovery,” Gallagher told the County Derry Post. “You (Derry) boys would know his character and I would have an idea from afar.”
The defender, who has yet to play under Gallagher, was down in Santry in recent weeks for another opinion on his injury. McKaigue has received the all-clear and has been involved in 'some of the football' in recent weeks.
Speaking last week, Gallagher feels McKaigue 'probably hasn't' had the amount of football under his belt for the start of the league, with the management 'erring on the side of caution' with his return to action.
“We believe he will be fully fit and available for the Longford game,” added the Derry boss who termed McKaigue's return as 'brilliant news'.
“One thing for sure, his Achilles is 100 percent recovered,” Gallagher stated. “Will he pick up another setback? I don't believe he will, he looks in great nick but he just needs plenty of football.”
Meanwhile, Gallagher is happy that another Slaughtneil duo, Chrissy McKaigue and Brendan Rogers, are 'back going well' after going under the knife for knee injuries.
Gallagher revealed that both were 'fortunate' to feature in last Autumn's Ulster championship defeat to Armagh.
“They have had a lot of wear and tear over the last five, six, seven years, but they are back going well...they look after themselves phenomenally,” Gallagher added.
“They were meniscus injuries, needing eight to nine weeks to recover. They (Rogers and Chrissy McKaigue) played the latter stages of the club championship, the two National League games (Longford and Offaly) and the championship against Armagh, that's the type of characters we want.”
Midfielder Padraig Cassidy was also playing through a 'niggly hip injury' over the past few seasons for club and county. There were reports of surgery being required in the long-term and he managed his progress with injections, but Derry are boosted by his full recovery, having also been given the all clear at a clinic in Santry, following his rehabilitation programme.
“He (Cassidy) has worked phenomenally hard, often twice a day, and he is injury free,” Gallagher said of Cassidy's progress. “He is totally injury free and moving really well. That is a massive plus as well.”
Glen's Jack Doherty, apart from a brief appearance in the McKenna Cup defeat to Monaghan in December 2019, missed all of Derry's 2020 season and Gallagher is happy to have him back in the selection mix.
“He is fully fit and injury free. He looks good and is moving really well, has been able to do all the work and looks in good shape.”
Ruairi Mooney also missed all of last season and Shea Downey, one of 11 players handed their inter-county senior debuts by Gallagher, are also back in full training.
Gallagher stated that he had no long-term injuries in the 32-man squad, with Magherafelt defender Conor McCluskey the only one on the doubtful list for this weekend.
“Clucky got a collision on his knee at training. It is not too serious, it might be a slight doubt at this stage,” he said.
Ballinderry utility player Gareth McKinless, who withdrew from the panel early in 2020, is back in the fold after reaching out to the management to express his interest in a return.
“Since we agreed to move forward, Gareth has put the head down and I have been very pleased with his level of performance.
“Gareth phoned us telling us he wanted to play, that is a good sign and we are delighted to have him.”