The Oakleafers await the winners of the preliminary round 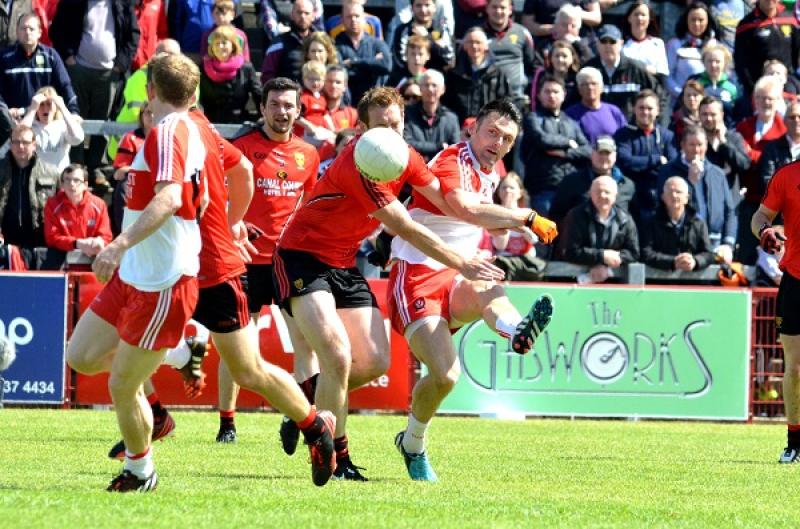 Eoin Bradley kicked the winning point in Derry's last Ulster championship win, a first round victory over Down at Celtic Park in 2015. (Pic: Mary K Burke)

Oakleafers’ boss Rory Gallagher will be an interested spectator at Páirc Esler, with a chance to run his eye over their opponents.

Should Down advance, they will travel to Celtic Park for a repeat of the 2015 clash won by Derry, their last victory in an Ulster championship clash. A Donegal victory would see Derry make the trip to Ballybofey.

Tuesday night’s draw also paired champions Cavan with Tyrone who will begin a new era under the guidance of Fergal Logan and Brian Dooher.

Last year, Derry narrowly missed out on promotion from Division 3. In the championship, after giving Armagh too much latitude early on, they came short with their brave comeback.

It was an afternoon when former AFL player Conor Glass was one of four debuts, a number that doubled with Patrick Kearney, Oisin McWilliams, Paul Cassidy and Alex Doherty coming off the bench.

There were also starts for goalkeeper Odhran Lynch, Ethan Doherty and 2017 Ulster minor winning captain Padraig McGrogan.
Gallagher will look to skipper Chrissy McKaigue for leadership and will be hoping to get a greater level of support to ace marksman Shane McGuigan in attack.

Before that, Derry will be occupied with another promotion battle in Division 3 North against Cavan, Fermanagh and Longford where they must finish in the top two to reach the play-offs.

No draw has taken place for either competition, which don’t fall under the elite status that permits a return to action.

The 2020 minor championship wasn’t completed. Derry saw off Armagh in the first round but the competition was halted before their semi-final with Tyrone due to a further Covid-19 lockdown.