Sideline View: Kicking down the door 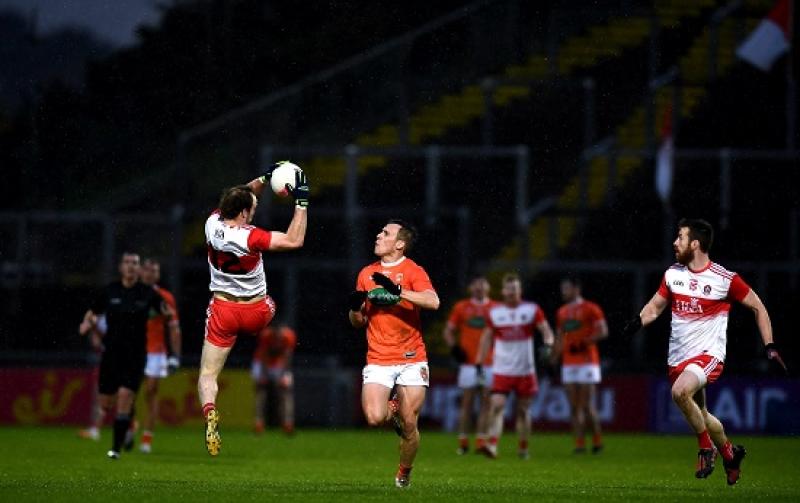 Lockdown means nostalgia to the Sports Editor of a local newspaper. It's a brilliant opportunity to showcase those who have gone before.

One thing you notice is the pleasure people get from chatting about the past. Everyone has a story to tell. And in a way, it is a therapy for the sporting landscape they crave.

In recent weeks Danny Quinn lifted the lid on Derry's progression through the eighties. At a glance, it was a mixture of a competitive club scene and school conveyor belts feeding a minor and U21 group that took Ulster and beyond by storm.

Danny puts the current Derry football landscape alongside the one he toiled in. And everything comes in cycles.

I agree wholeheartedly. Things are starting to pick up again. Since Derry minors chinned All-Ireland favourites Donegal in a 2015 Clones ambush on the way to a first Ulster title in 13 years, the Oakleaf has been rising.

The digger man is long since gone. The foundations have been poured, the first floor joists have been laid and the brickies are shaping the house towards wall-plate height in project Derry.

In an aside, Damian Cassidy's new football development committee have peeked into Kerry and Dublin, to see what it takes to turn one house into a new development. They have jotted down their findings, dotted their i's and crossed their t's. The planning permission has been applied for. It's a waiting game now to see how much their proposed development can grow.

For now, Rory Gallagher is finding a way to get Derry's current side to roof height and beyond.

It's often said that defeats are analysed more than wins. There always needs to be a reason for loss. Rory will no doubt have picked through the rubble of their championship defeat last year.

The manner in which Donegal pulverised Armagh would suggest that a first Ulster title since 1998 was beyond Derry. But one thing is for certain, victory that night in Celtic Park was well within their grasp.

Defensively, if they'd have got anything out of the first 10 minutes, they'd have won a first Ulster championship game since 2015. They were carved open too easy for the first four points.

Possession was coughed up and when play returned to Derry's defence, there wasn't a hand put on Rory Grugan (twice), Jamie Clarke or Jarlath Óg Burns as they kicked Geezer's charges into a grip of a game they never lost.

Trailing by six at the break, Derry were a different animal in the second half and had more about them. Had they not been as wasteful during Armagh's 10 minutes without the black-carded Jamie Clarke, it was another reason why they'd have won.

In time, Derry have the tools to build a team to oxter their way into the top table in Ulster. Like Cavan did, to lever themselves inside Donegal and Tyrone at the head of the queue.

For now, if we are going to break the mould and take a championship performance to a level where we are putting tiles on the roof, a medium to long kick-out strategy needs to be added to the locker.

Of Odhrán Lynch's 23 kick-outs, on his championship debut that night, 21 of them found a red and white jersey. All but two of those won were uncontested and mainly in the defensive parish, eight of them by Padraig McGrogan who peeled into space.

It is possession, but it only takes you so far. At the other end, when Derry had the full press on and were gnawing away at Armagh's lead, Blaine Hughes kicked over the top of midfield. It hurt Derry's defence. Three of the kick-outs in particular were won by impact substitute Niall Grimley. It was enough to stem the tide.

Odhrán Lynch's legs are like rocket launchers. Roll back the years to the 2018 MacRory semi-final over Maghera when he thumped the ball well into their defence.

The previous year, when Bessbrook looked like they were taking the semi-final replay to extra-time, Lynch had other ideas.

No sooner had the umpire's white flag signalled Liam Kerr's equaliser, the Convent netminder grabbed a second ball from behind the goals and arrowed his kick-out down the wing to Conall Devlin. It was instinctive and in the white heat of championship. And seconds later Kevin Small's winner had Magherafelt into the final.

The conundrum for Gallagher is an absence of natural midfielders. Those who will pluck a ball when needed.

Conor Glass is only back in the country five minutes and Oisin McWilliams has a paltry 54 minutes inter-county experience behind him. Aside from Emmett Bradley, that's Derry's out and out midfield options.

Niall Holly is not on the panel and the rest of the midfielders in the county are mobile runners. The Padraig Cassidys, Ciaran McFauls and the Danny Heavrons. Players who mainly operate there at club level because of their engines rather than a leap to pluck kick-outs.

It's effective. But, at county level, Derry need to find a couple of longer options.

One could be an overload of players on a given wing, something built around a set of signals. For example, plonk Conor Glass on one flank, with breaking ball scavengers within running distance. A tactic could be a low trajectory kick in Glass' direction and the area is flooded to create an overload.

It wouldn't work every time, but it only needs to come into the game to offer variation.

A second option would be the kick to the outside, something Steelstown used to perfection. A line of men down the middle and once goalkeeper Marty Dunne began his run, blue jersies peeled left and right to give him options. Like Devlin did for Lynch in that aforementioned MacRory game.

Another example was Michael McEvoy's selfless decoy runs, from wing to wing, in the 2019 league final against Leitrim in Croke Park. He rarely handled the ball, but it opened so many doors for others and Thomas Mallon's kicking into the spaces was a joy to watch.

Kick-outs dictate so much of what direction a game takes. The kicking tees helped coaches find a way of convincing slender U14 'keepers to stay between the posts a year later when faced with kicking a bigger ball, the size five, off the ground.

With Stephen Cluxton's high standards, now the number one jersey is an attractive option for young players. Goalkeeping is now cool, but it is only as successful as the tactics further out the field and runs made.

Rory Gallagher has found a goalkeeper with an age profile that can help him grow into a long-term option for Derry.

If a short-term success story is found to the county's terrible Ulster championship record, safe possessions in defence must be replaced with winning the ball further up the field to hurt teams and keep them guessing.

Only then, will the ridge tiles find themselves on the roof. Rome wasn't built in a day. Neither was a house.