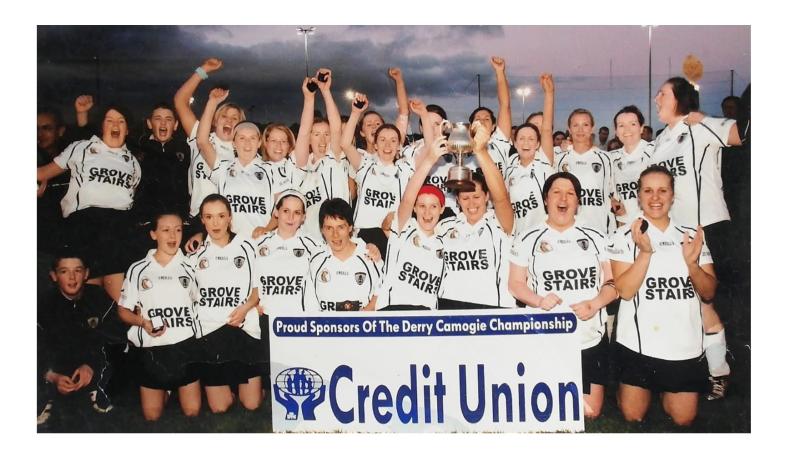 The final, played in front of a large crowd, was a classic; with the outcome never clear until the last blow of the whistle.

As the game approached the final five minutes, Lavey led by a mere two points and the neutrals in the crowd must have thought that Castledawson were to be piped at the post once more.

The Broagh girls, however, had other ideas and when McAuley’s shot dropped into the right hand corner of the Lavey net, there was an eruption of noise around the ground, as the crowd sensed that the Lavey/Swatragh grip on the Derry championship might be finally coming to an end.

A pointed free from a 45 from the impressive McAuley sealed the game and sent the Castledawson crowd into ecstasy.

This game began at a frantic pace with a fifth minute Castledawson goal which was seemingly scrambled over the line by one of the Lavey defense.

This was followed by a fairly low scoring first half and at the break the challengers had the edge at 1-2 to 0-2.

After half-time, however, the game opened up a lot more and Castledawson added another goal with a pinpoint pass from Róisín Pickering finding Shauna Mulholland, who goaled with some ease.

This was followed by a free from Katie McAuley, which gave the ‘Dawson a 2-4 to 0-4 lead, but Lavey’s purple patch was soon too follow, and within a few minutes, the Broagh girls’ lead was wiped out.

Goals from Lavey’s Attracta McPeake and Therese McCann followed by two huge frees from Claire McCloy seemed to have broken the challengers’ resolve but gradually, as Castledawson stuck to their game plan, they had the courage and resolve to bring this game back from the brink, and to bring the championship home for the first time.

Castledawson’s excellent performance was down largely to the discipline of their players regarding a clear cut game plan.

Catherine Pickering was employed as a sweeper in front of Paula McCloy and Karen McGrath and Maura McCloy stuck to their positions within that ‘diamond’ formation steadfastly.

Katie McAuley was a huge threat but Roisin Pickering and Shauna Mulholland caused the Lavey defence huge problems by sticking to their positions on the wings and not allowing Lavey to crowd the defence, thus giving McAuley the room to roam, as it were.

Claire McCloy and substitute Jeanette Martin were best for Lavey but ultimately it was the organisation and a burning desire to secure their first title that brought Castledawson through.