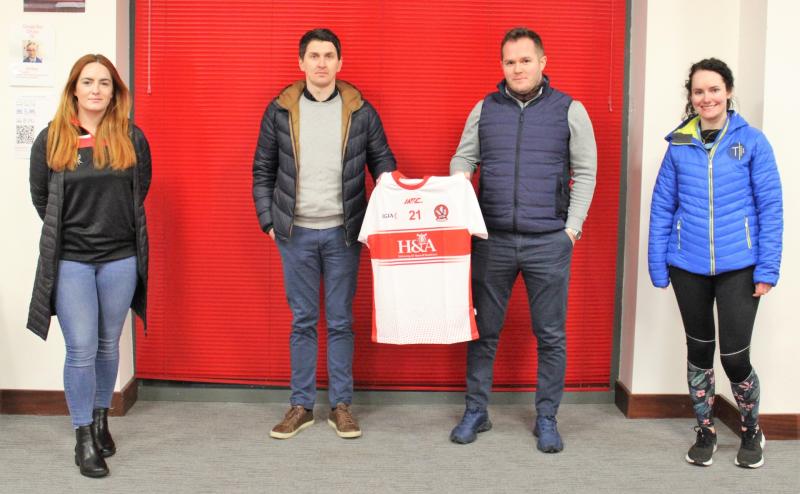 Derry Ladies have appointed Antrim man Odhran McNeilly as their new senior manager, the County Derry Post can reveal.
The Tír na nÓg Randalstown man takes over from Paul Hasson who stepped down after the Oakleafers' exit to Antrim in the All-Ireland series last year.
“Odhran comes to Derry with a very strong skill set and impressive management expertise which has been displayed during his tenure as manager of Moneyglass Senior Ladies, one of Ulster’s most successful ladies' teams,” commented Derry Ladies Acting-Chairperson Hannah Caldwell.
“We are delighted that a candidate with Odhran’s credentials has accepted the role of Derry Ladies senior manager, and it is an honour to have Odhran and his team on board.”
McNeilly has managed his club senior team in Tír na nÓg, where he won an U21 championship. He led Moneyglass Ladies to a championship title last year and has been involved with Antrim boys' development squads.
“We are certain that Odhran’s enthusiasm, motivation, attention to detail and his ability to connect with his players will ensure our Derry Senior Ladies are given the platform and opportunity to perform to their full potential at the very highest level.”
McNeilly will have Moneyglass man Benny Marron on board as Head Coach. Former Antrim 'keeper Marron, who worked as GAA Development Officer in St Mary's Grammar School Magherafelt.
He has coached Lámh Dhearg and St John's senior mens' teams, while also having experience of coaching ladies' teams to success in St Michael's Lurgan and was interim manager of Antrim Ladies' senior team, in 2018, after the boss stepped away in mid-season.
Claudy senior player Conor Johnson will come on board as Strength and Conditioning Coach. Former St Patrick's Maghera and Derry minor goalkeeper Ciaran McCloy completes the management team and will coach the goalkeepers. McCloy has a host of underage medals in Glen's years of dominance.  He played for Belfast side St John's last season, a team trained by Marron, but has transferred back to Glen.
Derry were last Ulster champions in 2018 and are still waiting on a first All-Ireland title. They lost to London in the 2008 decider and more recently, in 2017, a controversial late Fermanagh penalty earned them a replay before falling to the Erne girls at Clones on the replay.
“It is an absolute honour to be named Derry Ladies manager for 2021. I intend to firmly take this opportunity to improve the fortunes of this proud county,” commented Odhran McNeilly.
“I'd like to thank the County Board for their support to date, I have been able to assemble a high calibre back-room team, which gives us a strong footing moving into 2021.”
“We are under no illusion of the work required but we feel all the tools are there and we fully intend to make best use of the resources to hand.
“There is a large portion of the 2017 team that reached an All-Ireland final who remain, and you have quality youth players coming through who want to stake their claim and that only bodes well, healthy competition.”
The squad have met on Sunday, via Zoom, to roll out a 12-week Strength and Conditioning programme. McNeilly has also been given footage of Derry's game from last season and the three club finals – senior, intermediate and junior – from last season.
“I watched the three county finals over the last few days, and I was pleasantly surprised by the quality on show across all grades.
“There is a great buzz, we can't wait to get started and we will leave no stone unturned in our pursuit in 2021,” McNeilly added.
The management are aiming to link in with minor manager Paul Simpson, with the view of a pathway to the senior squad.
“There is a clear vision from the County Board to deliver success and trophies,” Benny Marron said.
“That is something that appeals to me and I am thrilled at the prospect of being able to work with everybody to help make that vision a reality.”
“Odhran and myself are very excited to get started on the pitch once these lockdown measures are lifted. We are grateful for the foundations the previous management teams have left for us and we are confident that the package Hannah (Caldwell), Teresa (McKenna - Secretary), Paul (Simpson) and County Board have provided will entice the best players to represent Derry.”
“I have seen from the performances in the last few years that the players are capable of playing at a high level. In Owenbeg we have a state-of-the-art facility, we have quality footballers, and with hard work we hope to raise the standard and profile of our Ladies county team.”