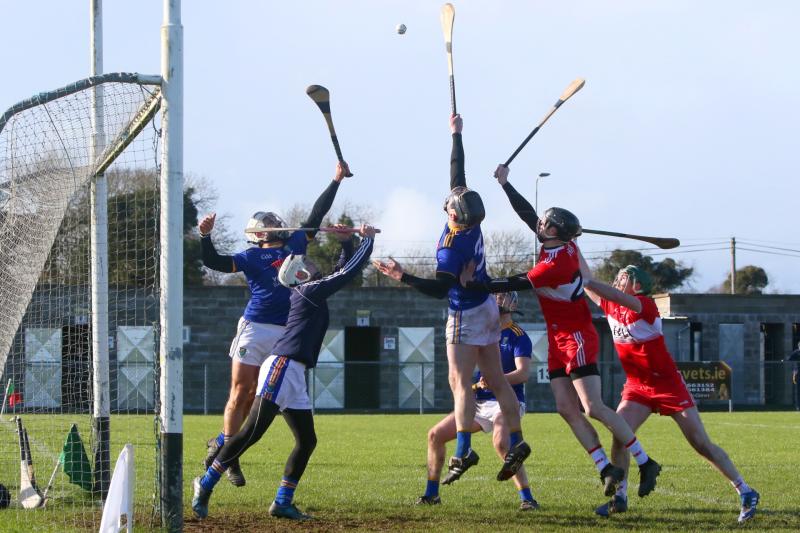 It took an eternity for John McEvoy to emerge from the losing Derry dressing room after their championship exit to Offaly.

Minutes earlier, a knock on the Páirc Esler dressing room door, by an impatient Offaly official to return a previously swapped Derry jersey wasn't well received. Inside, an important post-season debrief was unfolding. One of those 'regroup for next year' or 'thanks for the effort, but I'm stepping down' type discussions.

McEvoy came in, under former Chairman Brian Smith's watch, with no defined term. It was agreed for a second year and that was as much as was discussed.

He stated that a decision on his third season at the helm would be decided by the end of the month. Leaving Newry that day, I felt McEvoy would stay. But alas, he – and his management team – stepped down.

The last two years were defined by tripping up in the middle of the season. As things began to get serious, consistency evaporated. Wicklow beat Derry three times in the 2019 season, including a drab league final defeat at a blustery Inniskeen.

And this year, a return from lockdown was met by an unbeaten run being spun into three straight defeats that left Derry like they were after Collie McGurk's tenure – in a division they are craving to get out of and no closer to lifting the Christy Ring Cup.

In 2019, Derry can feel hard done by with some refereeing decisions in their semi-final defeat to Meath. One in particular was an obvious foul on Tiarnán McHugh that turned the game. The Royals beat a Down team in the final that Derry had beaten. So that's how competitive the Christy Ring Cup is.

This year, they may regret showing Offaly too much respect by playing a sweeper, something they always did against Down. It left an attack already struggling for scores under more pressure and invited Offaly onto them.

A more aggressive approach saw them put together a better challenge, until John Mullan was dismissed, after being reported for striking with the hurl, a decision he can feel aggrieved about. 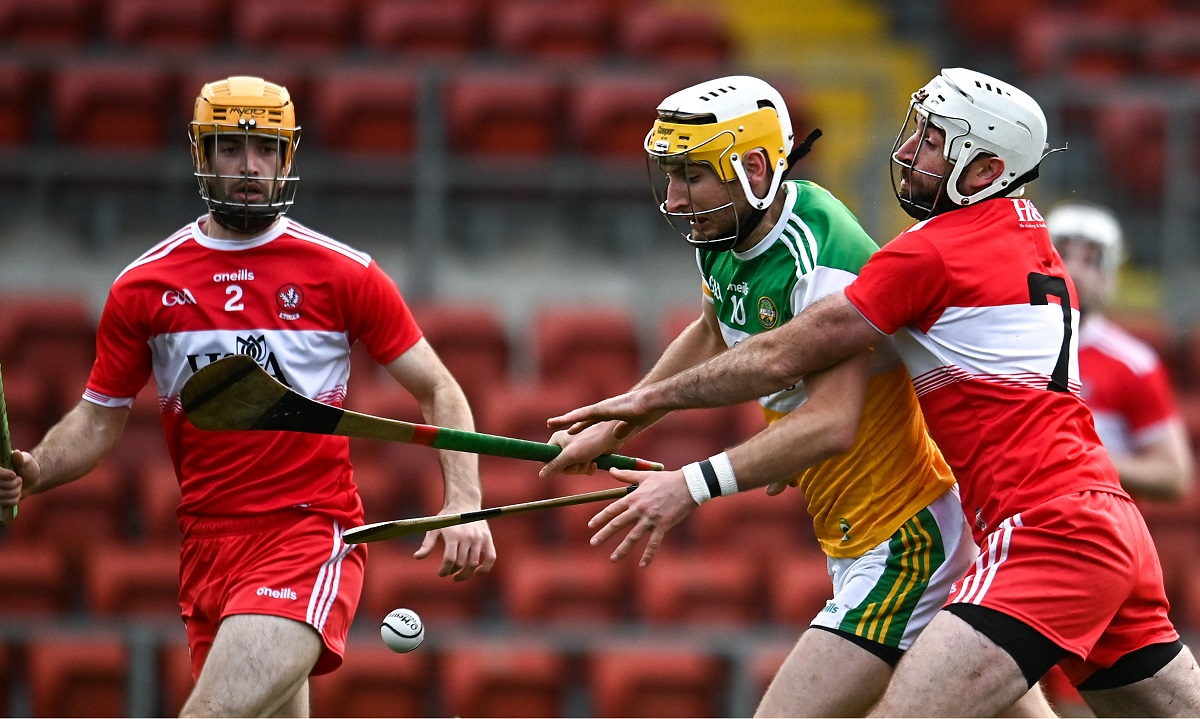 But when you strip the last two seasons down and acknowledge where Derry have come up short, the new manager will need to find an avenue for more scores, particularly goals.

Losing Brian Óg McGilligan, one of two players to start every game under John McEvoy, was a huge blow defensively in last year's league decider against Wicklow. But, after Derry coughed up a sloppy goal, they never really looked like cutting loose like they needed to if they were to carve out a goal of their own.

The league final with Down this year was a non event. Yes, Down's defence was resolute, but so was Derry's. The problem was that nothing stuck up front for Derry and they never looked like winning the game.

Of the 18 games played in the last two seasons, the scoring average has been very close. Derry have scored an average of 1-17, while shipping 1-16. The heavy Offaly defeat would've been offset by a comprehensive win over lowly Warwickshire.

As the stats (below) show, Derry failed to raise a green flag in any of their games with Wicklow, or against Kildare. If you are looking for small margins, Alan Grant's goal against Down last year slipped through goalkeeper Stephen Keith's hand. This year, Richie Mullan pounced on a ball the Down defence lost in the sun to decide another tight encounter.

They were not able to open teams up and inflict fear on opponents. The type that shot Antrim to Sunday's Joe McDonagh Cup Final.

In the Christy Ring Cup this year in Ballycran, the management had Derry well fired up for the battle. The Oakleafers showed a tremendous hunger to battle their way back from the brink, but lost the game when Down took the one goal chance they got. It was Derry's last two seasons in a nutshell.

A huge plus has been goalkeeper Seán Kelly, who also played very game since making his debut under John McEvoy. He is commanding in the air, has a weapon of a puck out and you'll struggle to find a better save anywhere than the one he made against Wicklow at Owenbeg in his first season, brilliant reactions from point-blank range.

His brothers Paddy and Conor have been mainstays in a defence that also includes skipper Sean Cassidy. Brian Óg McGilligan and Mark Craig bring more experience. Eamon McGill came in this season after fine displays at club level.

Darragh Cartin, Darragh McCloskey, Meehaul McGrath, John Mullan and Seán Ó Caiside have all been tested in defence. Next season, getting a settled six will be of paramount importance.

That's where the problems start. Gerald Bradley was a huge loss when he opted out last season. He has the versatility to play sweeper, midfield or as a target-man. As well as his ball winning ability at midfield, he can chip in with scores at midfield. New managers Dominic McKinley and Cormac Donnelly must secure his services for 2021. 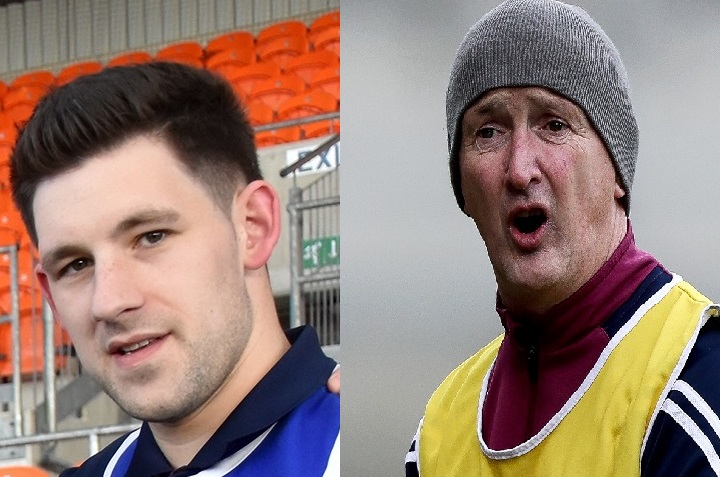 Eoghan Cassidy will be another year older and if he can winter well in the gym, his silky skills will set him up as an inter-county regular for the next decade.

Dara McGilligan and Padraig O'Kane, given time, have an inter-county future. McGilligan had a great debut season for Kevin Lynch's seniors and O'Kane has an eye for goal, both of whom came through the Celtic Challenge U17 production line.

Of Derry's 24 goals in the last two seasons, Odhran McKeever (5), Cormac O'Doherty, Richie Mullan and Sé McGuigan (with three each) bagged over half of them.

The most natural goalscorer in the county is Brendan Rogers. He played once under McEvoy – in the league final with Wicklow - and is unlikely to feature much next year, if he does at all. With a split season, it would need a training plan around the football schedule to allow him, Chrissy McKaigue and Shane McGuigan to throw their lot in with the hurlers.

While it is not impossible, any plan to create a system that creates goals would need Rogers playing in every game for it to work, otherwise it would be a waste of time. That's realistically not going to happen. The plan around the Celtic Challenge U17 system was to widen the base for Derry to be self-sufficient without a reliance on dual players.

McKinley and Donnelly will have to build an attacking unit with Sé McGuigan and Tiarnán McHugh battling for the number 14 jersey, to take the best out of each other in the process. Richie Mullan and Cormac O'Doherty would operate as playmakers. The likes of Fintan Bradley, Dara Mooney and Ryan McGill being given a chance to develop both physically and in a hurling sense.

Imagine having Brian Cassidy and Sean Leo McGoldrick, two natural talents, throwing in their lot, with Niall Ferris staying in for the long haul. Getting Cassidy on board would be a huge coup. Throw in the likes of Odhran McKeever, Mark and Jerome McGuigan, all of a sudden there is a genuine competition for places that could drive standards to another level.

If Derry, as a county, are serious about breaking out of Division 2B and annexing a first Christy Ring Cup, these are the type of conversations that need to be happening.

Derry reached two league deciders under former manager John McEvoy, getting off to strong runs in both seasons.

The Oakleafers won 10 of the 18 games in league and championship, with a draw against Kildare in the league earlier this season, the last game before lockdown.

Of the 18 games, Derry failed to find the net in eight of them – including the three games with Wicklow and this season's league final with Down.