Derry players to meet before the end of November 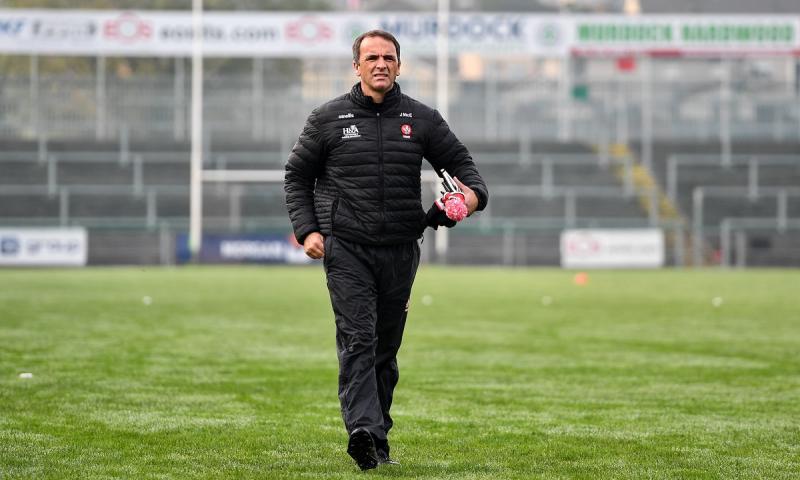 Derry hurling manager said it is 'too early' to discuss his future (Pic: Sam Barnes/Sportsfile)

John McEvoy said it is 'too early' to discuss his future as Derry hurling manager and 'one way or another' a decision will be made by the end of the month.

Speaking after Saturday's defeat to Offaly at Páirc Esler, the venue for his first game in charge of the Oakleafers, McEvoy hailed the Derry hurling squad as having 'no egos'.

The Laois native and former Dublin U21 hurling boss was appointed in December 2018, taking over from Collie McGurk.

During McEvoy's tenure, he led Derry to two promotion play-offs, losing to Wicklow and Down. Last year Derry were beaten in the Christy Ring Cup semi-final by eventual winners Meath and Saturday's victors Offaly are odds on to follow suit, like Kildare did in 2018 after seeing off Derry in the semi-final.

There was no length of term officially outlined in the statement when McEvoy was appointed, under Brian Smith's tenure as Chairman and a second year was rubber-stamped at last September's county board meeting.

“It's too early to say,” was McEvoy's response when asked if he would be back for a third season at the helm.

“I just said to the guys (Derry squad) in there, the players will meet at the end of the month. We are 36 hours on the road every week, but don't mind doing it when you have committed players.

“I haven't had any discussions with the county board, it has been about this year. I'd imagine that by the end of the month, we will have decided one way or the other. I couldn't give you an answer on that at this moment in time.”

While McEvoy said any initial discussions indicated it would be 'with the view of' a three-year term, a 'couple of things' will 'predicate' the final decision.

The commitment of the players was one point he stressed, while also referencing the championship structure of the 2021 season. The GAA are set to propose a split season for 2022, but McEvoy was looking at how next year may pan out.

“I have no issue with Gaelic football, but it is very difficult on these lads to come in and be fresh for games. I think it hits us harder than most.”

McEvoy praised the effort of the 30 players, who have 'been brilliant'.

“The hurlers have been brilliant and there are no egos in there,” he stressed.

“You are not looking over your shoulder saying 'we could have this fella or that fella'. There are 30 fellas working hard.

“There is a brilliant management team there with Johnny McGuirk, Brian Delargy, Eoin McNicholl, Terry (Gray), the back-room and medical team.

“We added to the back-room team this year and you are trying to get inches all the time to get closer to the top.

“The culture has changed in the group, but it is that last 10 percent that we need to drive on and get ourselves out of this division.”