Down are the hurdle in Derry's promotion bid 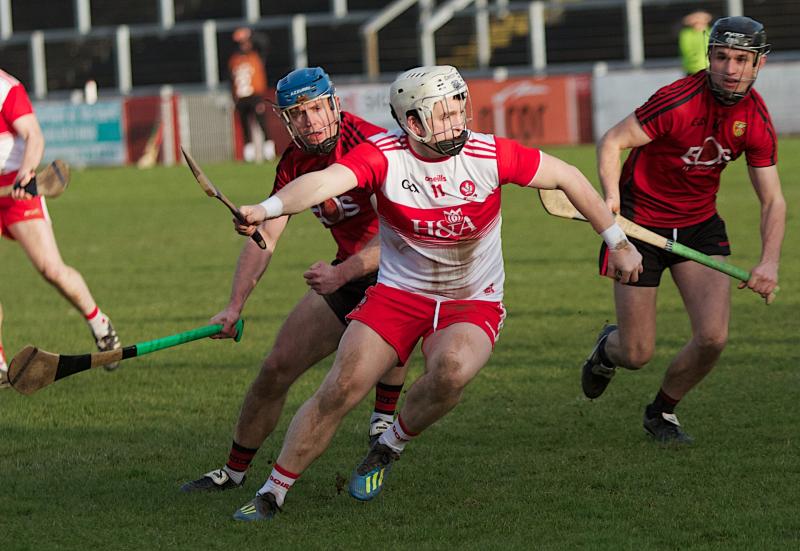 Cormac O'Doherty in action against Down in the NHL earlier this season (Pic: Tom Heaney)

Conor Kelly's equalising point saw Derry grab a draw at Celtic Park against Kildare back in March to complete a group of fine margins.

The draw was enough to see Down pip the Lily Whites and qualify for the league final, which was to be played on Saturday, March 14 at Davitt's new pitch in Belfast.

It seems like an eternity, but little has changed. At the time John McEvoy saw the final as '50-50' and speaking ahead of the rematch, the Derry boss felt it would again go down to the wire.

“Down are a serious opponent and one we respect,” he stressed.

“Ourselves and Down, over the past 10 years, have been either up or down in terms of promotion between 2A and 2B, and even further at some stages,” McEvoy added.

“I think both of the teams are in the same boat and we go into it a little bit unknown in terms of where our own form is at.”

Of the last seven clashes of the counties, Derry have won the last four. Three of them came under McEvoy's watch including his first game in charge when Alan Grant's proved the difference that night in Páirc Esler. This year it was again the puck of a ball at Celtic Park, this time from Richie Mullan's goal early on.

John McEvoy could be forgiven if he feels hard done by with the sporting lockdown. Derry had started the season like a train and, like every other team, has had to start afresh again.

“We gave them a couple of days and then we brought them in after the club championship,” McEvoy said in an interview with  the County Derry Post.

The Laois native spent all the weekends of the club championships running his eye over all the games, regardless of grade, and has called up seven newcomers to the squad.

Swatragh goalkeeper Conor O'Kane and wing back Patrick Turner have accepted the call. Lavey trio Chrissy Henry, young gun Ryan McGill and the championship top scorer Fintan Bradley have come on board. There is a return for Slaughtneil's Mark McGuigan and John Mullan of Kevin Lynch's, who can both play at midfield.

“It will take them a while to adjust. They are really good additions and they add to the competition within the group. That's what we always want, lads who will bring a fresh impetus and fresh energy to the group and they are all excellent hurlers, so we are very happy with them.”

In the absence of challenge games, McEvoy has opted for in-house games. He has been pleased with the quality on show, but there is always the concern of being undercooked.

“You are unsure as to the tempo, but I think most inter-county sides are in the same boat,” McEvoy added.

“We are training three times a week and we have brought in six or seven fellas who were performing well in the club championship. They have been really good additions, other than that we are just focussing on the game and we have not really thought about the Christy Ring (Cup).”

It's all about the league and going one better than last year's defeat to Wicklow. Apart from Na Magha's Alan Grant, he expects to have a full squad to pick from. The Ne Magha man is currently rehabbing from his knee operation and eyeing a return next season.

“Fingers crossed we get through the week without any injuries in training. We have a few knocks here and there, but nothing too serious,” McEvoy added.

“We gave them a few days rest (after the Magherafelt game) to recharge the batteries, but they were in with us on Wednesday night. They were in good form and looking forward to it, You have a small concern that they wouldn't have hurling, but at the same they are very experienced players and they look after themselves. They bring a new energy.”

McEvoy's concern is simple. Without a game in seven months, where exactly does his team sit?

“It is very difficult to gauge form,” he ponders. “You can do all the training you want, but we won't really know until we hit the Athletic Grounds in Armagh, where we are at.”

He is confident in their preparation. The atmosphere is perfect. And after coming up short in their promotion bid last year, hunger will be lingering.

“We said last year that we didn't perform to our capabilities in the final against Wicklow. There are a number of reasons for that and we have analysed them.

“We have a huge priority around the league and we want to prepare well in the league final. Certainly we want to perform better than we did last year against Wicklow, below in Inniskeen.”

Sunday is the fourth time John McEvoy will lead Derry in against Down, a side he has yet to lose to, but has the utmost of respect for. Two of the clashes were decided by the puck of ball. This is not likely to be any different. It's a 50-50 game.