Ballinascreen and Shamrocks within touching distance 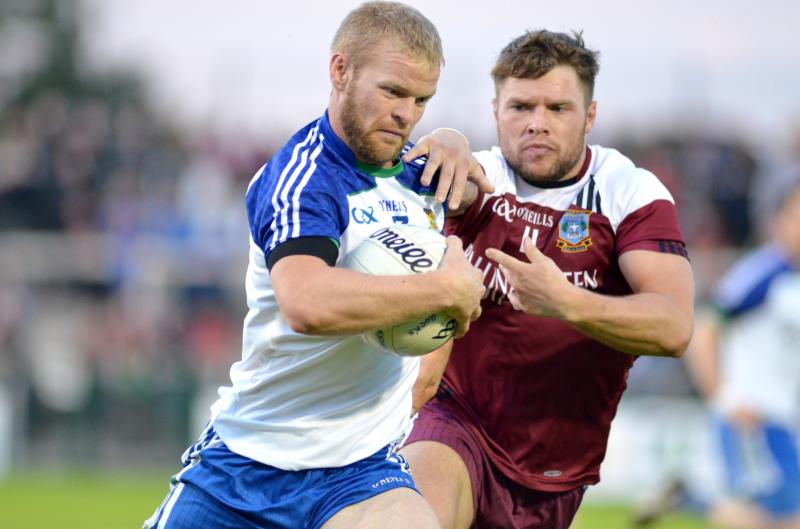 Niall and Liam Bradley are in opposite corners on Saturday evening, but both are singing off the same hymn sheet and rate the Celtic Park showdown as a '50-50' game.

With Glen and Slaughtneil pulled out against each other, the rest of the teams will be rubbing their hands and Ballinascreen and Ballinderry are poised in the challenger category.

Ballinascreen were disappointing in their tame defeat to Swatragh, but hit the ground running against Bellaghy. The Tones had recovered from the early 'Screen onslaught, but Ryan Doyle's cracking finish to the net sealed victory, one Bradley 'expected' given their 'Indian sign' over Bellaghy.

Ballinderry rode their luck against Newbridge, but Connor Nevin dragged them along, allowing them to stay in touch. When Newbridge squandered chances to kill the game in the third quarter, a half fit Ryan Bell came off the bench and capitalised on a kick-out error to slam home the game-changing goal.

In extra-time, he lofted a cross-shot which wasn't dealt with and Oisin Mullan effectively won the game

As Greenlough manager, Conway lost to Ballinascreen in two semi-finals, both by a point, the second during Liam Bradley's first season.

“The way I look at it, it is a 50-50 game, there is nothing between the teams,” Bradley added. “While Ballinderry aren't the team of five or six years ago, they have championship tradition.

“They are very hard to beat and, like ourselves, they have a number of young players along with a few experienced players. In my view, there is nothing to choose between the teams...it will definitely go down to the wire.”

'Screen struggled with their kick-outs against Swatragh, even before Ronan Devlin's black card gave the Davitt's an extra body to allow their skyscrapers to suffocate them. They changed it up, opting for Niall McGlade ahead of Ryan McGuigan between the posts.

“While we are looking for perfection all the time, it improved greatly from the Swatragh game. If you can keep the ball from restarts, it goes a long way to securing a victory,” Bradley said.

The 'Screen boss confirmed that Marty Bradley is on his way back and regular goalkeeper is a 'possibility' for the Saturday's quarter-final, but more certain to be on the bench.

“He'll definitely see some action in the championship if we can beat Ballinderry,” Bradley said of his goalkeeper.

“We have got Marty (Bradley) back training and if we can get past Ballinderry him and Ryan Scullion will be a big plus for us.”

Noel Rafferty, Ryan and Niall Doyle started and along with Conal and Christopher Logan, it takes the total to ten from the 'Screen minor winning squad of 2017 final.

“I think Ballinascreen can be happy with the progress of the players from that minor team. Things are looking up from that point of view,” Bradley added. All too often they relied on Benny Heron's turn of pace to open teams up for goals and Shane Mulgrew's accuracy from frees.

Against Bellaghy, Heron and Mulgrew appeared to interchange, with JP Devlin and Anton Kelly playing up as a defined front three. It is a much different approach than previous seasons, one that is more offensive and suits the cards they have been dealt.

Conor McGovern's engine allowed him to effectively play between the zones. Carlus McWilliams was exceptional, in his use of the ball and the positional sense that he carried from his underage days.

Dermot McBride did come off the bench, so it could give 'Screen another option going into the hectic month of the season. Whoever wins the John McLaughlin Cup, will need to win three weeks in a row.

“I said it all along, the way the championship was going to be this year, the team with the strongest panel would  have a big beating on the outcome,” Bradley said.

“I think it will go down to whoever gets the least injuries. The way the games are going to come thick and fast. It will be about injuries and keeping your players fresh.”

Niall Doyle has blossomed into attacking midfielder, alongside Paul Burns or Philip Bradley, the latter of which is a cousin of Ballinderry joint managers Niall and James Conway.

“You will be judged when the real championship begins,” Niall said before the Newbridge clash.

Their extra-time win came without Ryan Bell in their starting team, but it was his and Raymond Wilson's contribution from the bench that helped turn the game before Mullan's clinching goal. Bell tweaked his troublesome hamstring kicking the ball in the build-up to Mullan's goal.

“He wasn't ready,” admitted Niall Conway, of their decision to throw him into the game. “We had to go for it. We were in dire straits with 20 minutes to go. He went off injured again and is back to square on so it is a race against time.”

Along with the loss of Daniel McKinless in a challenge game with Derrylaughan, it leaves them short up front. Conway points to Greenlough without Lynn and Loughlin. Slaughtneil without Shane McGuigan and 'Sammy' Bradley. Same thing.

Like Baker, Conway admits the rushed championship throws up a totally different challenge.

“If you win the quarter final, you are playing the following week and nobody knows what they have available to them,” he said.

In the long-term, blooding five new forwards this year will leave Ballinderry in a stronger position. He admits to being in transition.

“We are working with five new forwards this year,” pointed out Niall, who has been involved in the club's underage again.

“Myself, James (Conway) and Mickey C (Conlan), if we see an opportunity to put a young boy in, we are not afraid to do it.

“That is the future of our club and you have to give them (management teams in the future) something to work with.

“Conor O'Neill is in his first year of senior football. There is Sean Graham (Conway's nephew), Glenn McOscar, Oisin Mullan and Shea Coleman...they now have the taste of it.”

The Shamrocks moved away from the defensive gameplan they played earlier in the season. Caolan Mallaghan and Conor O'Neill, who kicked 0-6, played up front. Raymond Wilkinson drifted in and out. Sean Graham, Gareth McKinless and minor player Shea Coleman played across the half-forward line.

“We showed a bit of character and other players stepped up,” Conway said of his side's extra-time win. “In the first half, we weren't good but there were periods in the second half, we should glimpses that we can play a bit of football, we need to see if we can sustain it.”

With 'Screen adopting a similar approach, Saturday's game could develop into an open affair.

Ballinderry will need to get Ryan Bell back to a level where he can be an impact. They might decide to opt for Raymond Wilson from the start this time and he would have the engine to both track and challenge Conor McGovern.

It will be interesting to see how Ballinderry approach Anton Kelly. His size throws a spanner in the works of Ballinderry's match-ups. If they play a sweeper, it gives Carlus McWilliams the licence to run the game from the other end. If they drop Nevin or Kevin McGuckin back, it will force them to pull Gareth McKinless to midfield, which will lighten their attack if Bell's hamstring doesn't recover.

Ryan O'Neill should pick up Noel Rafferty, with Declan Bell inside on JP Devlin. Shane Mulgrew and Benny Heron will need followers, as they interchange. That's where Ballinderry would be found out, especially if Conor McGovern pulls his marker out, it could leave their middle open. Nevin and McGuckin into three places isn't enough, especially with goalkeeper McKinless not imposing in terms of size.

A game for the millimetres, one which could see Ronan Murphy's duel with Gareth McKinless (if he plays in attack) as the key battle. Two players who play right on the edge. Murphy the perfect maker and McKinless the ideal playmaker.

Elsewhere, 'Screen could have the defensive advantage to take their more balanced side to the last four. It's a game to look forward to, between two teams who feel they have the winning of the game.