Roger...over and out: Report from Slaughtneil's 2019 win over Kevin Lynch's

Champions come from six down to retain title 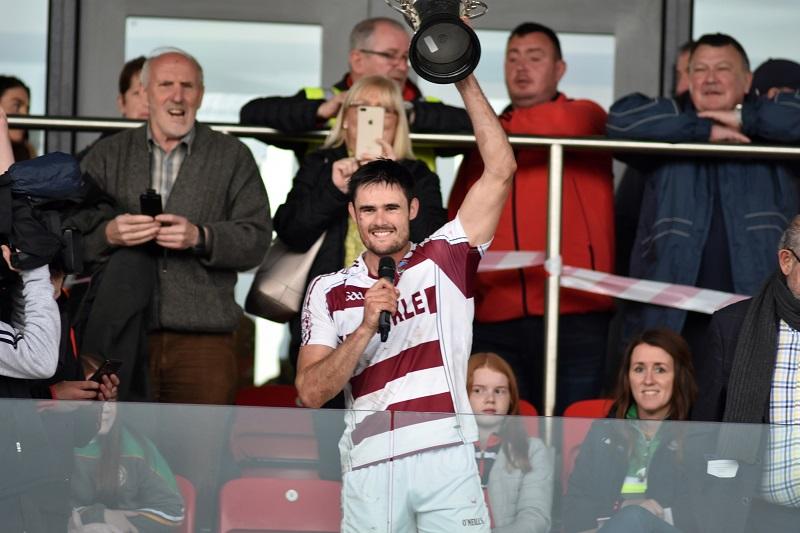 Slaughtneil once against etched their name on the Fr Collins Cup and Sunday’s triumph over Kevin Lynch’s marked an historic seventh successive title.
In the last four finals, the Emmet’s were home and hosed, well before the final whistle. Swatragh and Banagher, on three occasions, failed to pose the difficult questions.
This final was different, totally different. Kevin Lynch’s weren’t shy about putting a marker down.
Once they grabbed their second breath, their defensive unit grew in stature with every minute.
Sé McGuigan scored two goals in the league to begin a blitz but this time he spent the hour under Paddy Kelly’s watch.
Like last year’s semi-final, Geoffrey McGonigle’s side restricted Slaughtneil to once solitary 54th minute goal chance which Brendan Rogers eventually steered to the net.
After ducking between brothers Paddy and Conor Kelly, Rogers darted inside. When Liam Óg Hinphey and Mark Craig collided, the lanky dangerman appeared to lose his footing, yet still slotted to the corner of Brian Lagan’s net.
It put four points and daylight between the teams for the first time since Jerome McGuigan flashed a shot over the bar midway through the opening half.
Sunday’s game exemplified the word battle in every sense of a word, a term often thrown out too often to describe an enthralling contest.
This was the type of game the county’s hurling hardcore were crying out for and will have them already looking forward to next year’s instalment.
The scar and dripping blood on Chrissy McKaigue are the evidence. Not a backward step was taken, just like in 2014, the last final to have fans shuffling with anguish in their seats.
Two goals either side of half-time handed the initiative to Kevin Lynch’s and they grabbed it with both hands.
Slaughtneil were in a scrap and well they knew it, but Cormac O’Doherty’s accuracy never faltered. The Emmet’s wizard landed 16 points but it was his contribution in the second-half that kept his side in touch, as Gerald Bradley and Chrissy McKaigue pulled two shots wide at a vital time.
The skipper dusted himself down and it was his pass that played Cormac O’Doherty in for a 50th minute equaliser before Brian Cassidy edged the Emmet’s ahead for the first time since seconds before half-time.
Rogers’ goal clinched an eight point victory, a margin that was harsh on Kevin Lynch’s.
Then again, there are few better at closing out game than Slaughtneil.
It just second nature and after failing in their record-breaking five in a row football bid last year, late points from Karl McKaigue and Brendan Rogers gave the Emmet’s some breathing space.
It was a cushion they didn’t think they would need early on, after a bright opening.
Slaughtneil’s one change before throw-in saw Brian Cassidy come into the attack, with Gerald Bradley going to midfield and Michael McShane opting for a conventional six man forward line.
Brendan Rogers played at centre-forward where he had a terrific tussle with Liam Óg Hinphey.
In his first county final appearance, Jerome McGuigan’s imposing figure gave Conor Kelly plenty to think about in the early stages while Cormac O’Doherty and Mark Craig went toe to toe before the Emmet’s attacker broke loose after the break.
Kevin Hinphey started for the Lynch’s at the expense of Seán Kelly. Hinphey only lasted 21 minutes before the Derry ‘keeper, in front of the watching Oakleafers’ senior boss John McEvoy, came in to add another threat alongside Tiarnán McHugh.
Their tactic was very much to attack the new look Slaughtneil defence and McHugh once again put himself about against Sean Cassidy and later Shane McGuigan.

At midfield, Gerald Bradley would always pop up with a vital possession, especially after a Lynch’s score. Mark McGuigan began to win the physical exchanges with Niall Smyth, while Chrissy McKaigue and Thomas Brady went at each other for all they were worth. Both gave as good as they got and it helped turn the temperature up on a game that had the bumper attendance begging for more.
It threatened to spill over in the latter stages when Brady became embroiled with the Slaughtneil skipper who was summoned ashore for running repairs to a facial injury and to pick up a new helmet.
After falling two behind early on, Tiarnán McHugh was impeded close to the edge of the square by Sean Cassidy but Richie Mullan’s penalty went tamely over the bar.
The Emmet’s took full advantage and thanks mainly to O’Doherty’s accuracy from frees and a Jerome McGuigan score, they were 0-6 to 0-1 after 15 minutes, before the Lynch’s staged a fightback.
Niall Ferris’ long-range effort from inside his own half got them on their way, with Corey O’Reilly on song. Two catches from Sean Cassidy gave Slaughtneil some respite. However, when Cassidy’s clearance went straight to Mark Craig, he floated the wind-assisted sliotar goalwards where it dipped over McHugh and Meehaul McGrath before bouncing past Morgan McEldowney to level the game.

It was nip and tuck until the end of the half, with the sides still deadlocked at 0-10 to 1-7.
The Emmet’s kept the Lynch’s waiting after the interval but they were slow at getting to the pitch of the game and when Tiarnán McHugh hustled his way out of a ruck, he raced for goal where his shot was parried by goalkeeper McEldowney before spinning to the net.
Sean Cassidy dropped a ball moments later, leading to Corey O’Reilly point who was strangely substituted later in the game.
With the game in the mix, football goalkeeper Seán Ó Caiside plucked a dangerous ball on the crossbar and seconds later won a vital breaking ball in his defence.

Over the past five seasons, the Emmet’s have been in many a tight corner and that wealth of experience was invaluable.
When O’Doherty levelled proceedings, the energy began to surge through the champions’ ranks before Rogers’ goal proving the knock-out blow.
Richie Mullan narrowed the gap with frees, but six points in the last five minutes – including a beauty from Karl McKaigue – ensured there was no late drama and Slaughtneil wrote themselves into the history books.

MAN OF THE MATCH

Cormac O’Doherty – For the Lynch’s Paddy Kelly was immense at full-back and led his defence to limiting the Emmet’s to one goal chance. But there was only one undisputed man of match. It was O’Doherty’s appetite and accuracy that dragged Slaughtneil into the game before Rogers’ clinching goal.

SCORE OF THE GAME

Ferris point – With his side trailing 0-6 to 0-1, midway through the first-half, Niall Ferris found himself in possession well inside the Lynch’s ‘65’ metre line before letting fly with a spectacular effort to kick-start their comeback.

Rogers goal – Like last year’s semi-final, Kevin Lynch’s reduced Slaughtneil to one goal chance and when it presented itself, Rogers took full advantage. After ducking between Conor and Paddy Kelly, he saw a gap and finished low to the corner of the net.