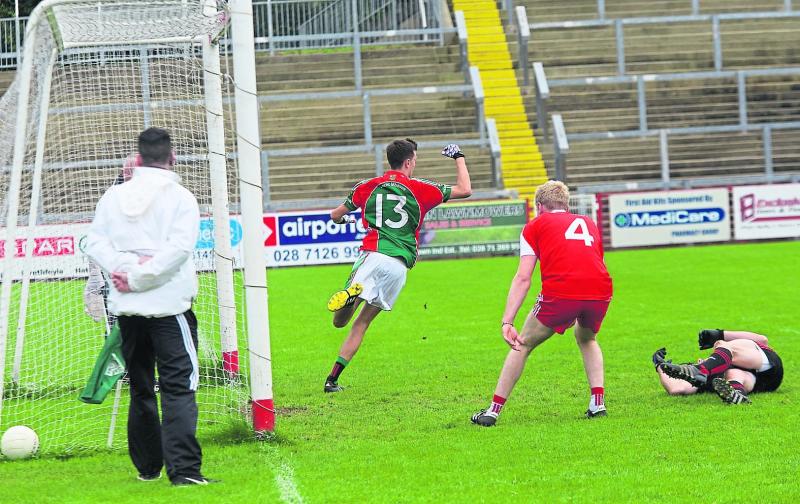 Conor McGee celebrates his goal between a previous clash of Slaughtmanus and Drumsurn (Pic: Tom Heaney)

The group winners have a week off to survey the teams coming through the qualifiers. For everyone else, the championship begins now.

Not only were Drumsurn unlucky not to snatch a draw with Faughanvale, but if they had worked their Tiarnán McHugh chance into a late equaliser, a point would have been enough to book a quarter final spot.

Declan Toner's side have drawn the short straw, with concessions and a condensed calendar forcing the CCC to use scoring average.

They were the side everyone will have wanted to avoid in the qualifiers' draw and the extra game will make or break them, as they aim to move from title challengers to contenders.

In the last two seasons, they have lost to the beaten finalists and are a year more experienced. They have lost Cahir Mullan to a groin injury that plagued him for much of last season and now base their midfield around his brother Daryl and Mark O'Connor, who has returned after a spell playing rugby.

Slaughtmanus – without Kyle Gallagher - squeezed past Ballymaguigan to pick up their only win of the season, thanks to the woodwork denying Darren Conway in the latter stages.

Fergal Hargan, who manages the team with help from Darren McShane, will have to take solace in how they performed against Greenlough. Two goals, against the run of play, had the title favourites ahead at the break.

Gavin McShane continues to prove his worth and with Conor McGee up front, they do have forwards capable of winning games.

They lack the overall balance that Drumsurn bring to the table. Tiarnán McHugh, Pearse McNickle and Harry Foster always grab the headlines with their scoring, but there is so much more to them.

Ryan and Michael Mullan are coming back into consideration for a start. Ciaran Mullan, while not having played in the championship, continues to be a huge influence on the squad.

Knock-out football is always a different animal and if Drumsurn come through this one, they will be the team the group winners will want to avoid.

On finals day in 2018, while Limavady were celebrating their junior success, Ballymaguigan took the field for the intermediate decider and a defeat to Banagher.

Two years later, they go head to head with an intermediate quarter-final spot at stake. While the 'Quigan have five titles to their name, they are very much in transition and are a pale shadow of the team who were always at the top end of the grade and played a brand of football that saw them constantly challenge for glory.

The draw wasn't kind to them, pairing them with two of the best teams in the championship.

The Ballymaguigan age profile has gone through the roof. Ciaran McIvor and Darren Conway continue to be the spiritual leaders of the side and Conway's ability to win ball at full forward is their ace card.

Sean Brady's injury has forced him into the management team and they are without Daniel Bradley, leaving Gary Burke to carry the scoring responsibility.

They started brightly against Castledawson, but then struggled to protect the centre of their defence and lost the midfield battle.

By contrast, Limavady had ground their way to a win over Glack and while they lost to Steelstown and Glenullin, they will take heart in now turning into the established intermediate team they once were.

Oisin Hassan's accuracy from frees is a hallmark, but they will need a big game from Richard King. When Ballymaguigan were in their pomp, it was Michael Spiers, Paudie Martin and Tomás Brady who would launch their attacks from deep. Dominic Woods will need to make the trio defend. This is where the game will be decided.

Ruairi Hassan has returned from suspension and will add to their attacking options. Shea Bradley and Liam Cassidy are the key players in defence, in front of goalkeeper Aaron Cassidy.

A tough game to call. Experience versus a team trying to pull themselves to the next level. If Limavady can limit the supply of ball to Conway, they may have enough to edge this one.

Sunday's early game is a meeting of the last two winners of the junior championship, who have are now moved up a level.

Glack conceded their game to Steelstown, citing a shortage of numbers, but they will have taken much for their performances against both Limavady and Glenullin.

They led the Wolfhounds at half-time, but failed to fully utilise the breeze and Cormac Boyle's presence at full-forward.

When Richard King converted a penalty, there was no way back for Glack.

James Martin McLaughlin returned between the posts for the Glenullin game, but without Aaron Moore, Eddie McLaughlin and others, they had just 16 players and had to rotate sub Finbar O'Brien to keep their legs fresh.

Trasna's only win was a two point victory over Lissan, who gave them all they wanted for long periods until a late goal saw Eoghan Carlin's men through.

They tailed Faughanvale by double scores until Shane McElhinney's 58th minute goal sealed a heavy defeat and they were hammered by a Drumsurn team needing a huge score difference in the search for an automatic quarter-final place.

By the time Sunday comes and Mervyn McAleese throws in the ball, the group stages are in the history books. Doire Trasna have a more settled core of players, who have played at this level, and that may tip the scales in their favour.

Twelve years ago, reigning senior champions Glenullin lost their grip on the John McLaughlin Cup in a midweek replay to Slaughtneil. Later that summer, Lissan were crowned junior champions, before going to an Ulster final. How times have changed.

Lissan, under Kieran O'Kane and Karl Conlan, are a young side. Since conceding to Drumsurn, they had battling performances against Doire Trasna – a game they could've arguably won – and Faughanvale.

They are very much a work in progress after losing players, including Paddy McElroy, to emigration in recent seasons.

O'Kane worked the oracle with Drum and maximised their panel to get them back to intermediate football. In Iarlaith Donnelly, they have an exciting player to build their team around for the next decade.

Oran Donnelly plays the sweeper role and they build from there.

Dermot O'Kane leads the Glenullin attack and after a wobbly start, he has shot the lights out.

John Heaney looks like he is going to be without Chrissy Dempsey (Garvagh) with a knee injury. He turned the Limavady game on his introduction.

They could turn to Eoin Bradley for the role of playmaker. He hasn't featured since the second half of their humbling defeat to Steelstown.

'Skinner' had a MRI scan on a troublesome knee injury and will have one eye on the lucrative next round Europa League, after Coleraine's win over Maribor.

Heaney will have to assess the fitness of brothers Niall and Gerard O'Kane before finalising his team.

Donal O'Kane, Feargal and Donal Close have been among the young players called into the team recently.

The 'Glen have struggled so far, but it's hard to see them not booking a quarter final spot.