Steelstown romp to victory over Glenullin

City side put their hand up as title contenders 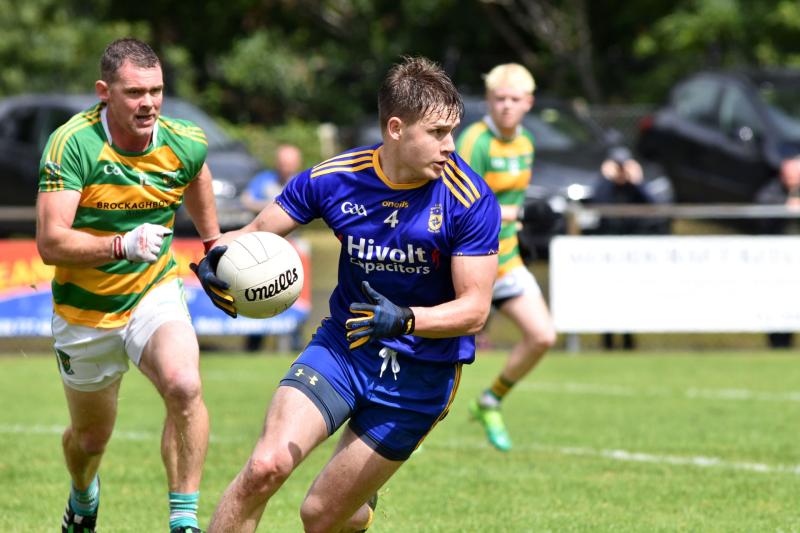 Championships are never handed out in early August, but Steelstown put their hand up as serious contenders for the intermediate title.

The club have never tasted adult championship success. With the manner of victory over Glenullin on Sunday afternoon, it would suggest that consistency will be what Eamon Gibson will be looking from his squad during this condensed season.

It leaves John Heaney's side with some soul-searching ahead of their clash with Limavady this weekend.

From the way Ben McCarron careered through the Glenullin defence in the opening seconds, until the final whistle, they never looked like being reeled in. If anything, they should've won by more. If they are to stand up and be counted when the serious heat comes on, they will need a more ruthless streak in front of goal. The pleasing thing for them, they appear to have the raw materials.

They will have to take somewhat of a reality check. Glenullin didn't offer the threat many expected and showed signs of the form that found them in relegation trouble last year.

It was a big ask for Michael Óg McKeown in his first game in goals to replace the injured Pearse McNicholl and when they failed to secure possession at midfield, it was a long hour for him. Steelstown's runners through the middle hurt them and with Ben McCarron playing as a third midfielder, their mobile attack thrived in the space.

Dermot O'Kane, one the best dead ball kickers in the county, was off colour and Eoin Bradley's relaxed 13 metre free coming off the post summed up a day they will want to forget.

Stephen Cleary played in the reserve game, but was forced off injured and 14 minutes into the senior game Eoghan Bradley's ankle injury saw him replaced. On came Rory Maguire who had while he had a terrific game, he will be disappointed not to have bagged three further goals.

Cahir McMonagle will be another option in attack, but it's hard to imagine him getting the room he was afforded yesterday when the real action comes to town.

Glenullin put Conor Rafferty onto Neil Forester in what seemed like a curtaining job, while Feargal Close pushed back on to Gareth Logue. It was 'Logie' who dictated the game and even when Gerard O'Kane was sent out to mark him, the Steelstown man's movement caused Glenullin trouble.

Steelstown were three points ahead when the first goal chance presented itself, but it fell to Glenullin. Dermot O'Kane picked out Paul Rafferty in front of goal but the low pile-driver was instinctively turned onto the bar by goalkeeper Marty Dunne. Seconds later Jacob Duffy had the ball over the bar at the other end.

Brothers Dermot and Gerard O'Kane kicked two terrific point, but it did little to stem Steelstown's incessant running game. Whoever is going to stop them, can't afford to drop off. They will need a half-forward line that will occupy them and top the overlap.

When the first goal came, it was a majestic diagonal ball from full-back Shane O'Connor who found Logue in space and his unstoppable shot went to the bottom corner of McKeown's net.

Ryan Devine floated over a fine score from distance before Jacob Duffy made the second goal, with the strong-running Maguire blasting to the net. Steelstown missed three point chances before Maguire was blown up for over carrying when through on goal, almost as if he was caught in two minds to flick to the final support runner.

Glenullin brought on three substitutes at the break. Brian Mullan was pulled out from goal with Eoin Bradley now stationed at full-forward.

Early in the second-half he won a free but somehow spurned it from close range. He missed a chance in front of goal and the attacking unit didn't have the movement that would have tested Steelstown.

At times Brian Mullan, who kept trying to push Glenullin forward, tried to float balls forward. The difference being was that the same space wasn't there that Gareth Logue made for the city men.

The half took seven minutes to produce a first score. The move began with Dunne's monstrous kick over midfield, Rory Maguire was again involved and when the ball came from a Mark Foley, he was brilliantly denied by Eunan O'Kane's diving block, before Foley drilled over the '45'.

Then came a moment Gibson and his assistant Raymond Tracey won't be too happy with. Mark Foley had the ball at his feet in front of goal, with time to engineer a chance. He opted to lazily soccer the ball to Jacob Duffy who missed without working goalkeeper McKeown. On another day, this lack of urgency could be crucial.

Ben McCarron and Darren McDaid, from opposite wings, floated over two sweet scores. And still the goal chances kept flooding in. After a neat move, McCarron and Jason McAleer created another opening but Maguire's thundering shot hit the bar before spinning over.

Maguire also brought out a fine save from goalkeeper McKeown who brilliant clawed the rebound clear, as the Steelstown attacks kept pouring forward.

The chances Steelstown were mounting and missing had no bearing on the result. At the other end a fisted Eoin Bradley effort dropped into Dunne's arms and Conor Rafferty fired over when a goal was on, but it was always going to be Steelstown's day.

MAN OF THE MATCH
GARETH LOGUE – Steelstown's dynamo went through at least three markers over the hour and he was everywhere. The fact he was man of the match in a dominant team tells enough about his performance. The finish for his goal combined power and accuracy to the bottom cover. With Ben McCarron playing further out, it was Logue's running that made th Steelstown attack tick.

MOMENT OF THE GAME
DUNNE SAVE – There were many scores in the game, but Marty Dunne's save was something else. Dermot O'Kane's ball came in from the wing and Paul Rafferty just pulled on it along the ground and when the shot zipped off the turf, Dunne somehow got enough on the ball to prevent a goal that would've levelled the game in the 11th minute.

TURNING POINT
QUICK POINTS – While the first half goals gave Steelstown a platform, having Eoin Bradley lurking at full-forward meant they could not rest easy at the back. There were seven points between the teams with 37 minutes gone, but in the next five minutes Foley, McCarron, McDaid and McMonagle chipped in with scores to kill off the game.