From the archive: Darrell's double delight 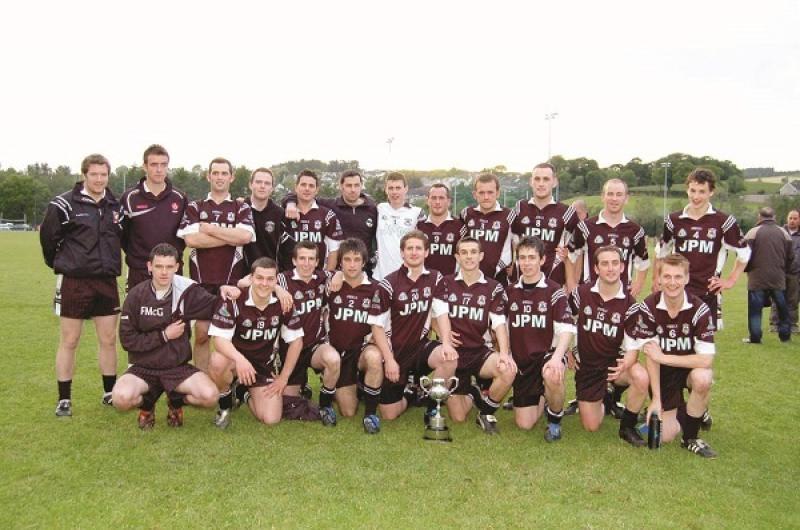 If you’d been writing a script for this Dr. Kerlin Cup final, you would have had Darrell O’Kane in it somewhere, writes Cahair O'Kane.

When he came out of the changing room bearing a grey hoodie, with the rest of his team-mates in black and white, you wondered had he even got a jersey.

But whatever he dreamt about on the night before, whatever he thought about over dinner, he wouldn’t have believed he would have scored an injury-time goal to win the trophy for his new club and win the man of the match award.

That’s exactly how it panned out. The sides level at 1-9 apiece, thirty seconds of injury-time played, and a long ball is spilled and flapped at by Ronan Tracey in the Foreglen goal.

Poaching on the edge of the small square (if not marginally inside it), as he did time and again in the green and gold jersey, it was a simple task for O’Kane to punch home the winning goal.

Some ironies are just written in the stars.

This one came in spite of every single ounce of effort Foreglen had to give.

Kevin O’Connor was O’Kane’s partner in crime since the two were knee high. They tormented defences in Intermediate football for years. They fought shoulder to shoulder for the green and the gold.

The Foreglen forward took Rian Kealey, a superb player, to the cleaners. O’Connor ended up with five points and set up his side’s goal in a magnificent display.

That goal, made by O’Connor and finished by James Brolly, looked as though it had swung the balance in the favour of the underdogs with just four minutes to go.

Having been behind from the 24th minute of a rather stagnant first half, Foreglen had worked incredibly hard to stay in touch with the Magpies.

A combination of wasteful finishing from Eugene Kelly’s men (they kicked 15 wides) and superb defending from a young full-back line of Ruairi and Shane Duffy and Cathal O’Hara kept Damien O’Connor’s side in contention.

This was no holds barred football. For the young Dungiven side, sprinkled with Kevin Farren, Kevin Johnston, Sean Murray and Donal McGilligan of last year’s minor team, this was probably the toughest game they’ve played, in a physical sense at least.

For that, you have to give Foreglen great credit. Brothers John and Oisin Duffy were lost to their defence before the game, having set off travelling on Friday. They’re without Niall McFeely long term.

To most teams with as small a pick, those absentees would be terminal against a side that contained six players that played in last year’s senior county final.

But when have Foreglen ever laid down? Kevin O’Connor might have kicked the points, but the spadework was done by plenty other.

Ciaran McFeely had an excellent game, the best he’s played in some while. He went after everything, especially in the second half.

Darren O’Kane’s heart is bigger than his chest. There’s not much of him, but he ploughs into everything. He’s pretty much the Foreglen prototype.

They felt the big decisions didn’t go their way. They may have had a point. Directly after Brolly’s goal, Martin Farrell latched on to a great ball from Darren O’Kane. He appeared to be fouled in front of goal but referee Joe Mulholland blew him for over-carrying.

Ninety seconds after what turned out to be Darrell O’Kane’s winning goal, Kevin O’Connor was pushed in the chest inside the area as he collected the ball. The referee felt he went down too easily and played on.

But for all the feeling of the world being against them, they were lucky to still be in the game at half-time. Having played with a fresh breeze, they were frustrated by constant stoppages over a stop-start 30 minutes.

With 22 minutes of 13-a-side football played, the score was just 0-03 apiece. It hadn’t caught fire at all. But Dungiven were missing what chances were being made. They kicked ten wides in that half hour.

Foreglen had just three points at the break, but just as importantly, they had conceded just five.

What the fans were treated to in the second half was night and day from what they had got in the first. It became a rip-roaring game. It effectively became championship.

The first seven minutes of the half were scoreless. The stage seemed set. James McNicholl got out well and fed the man coming off his shoulder. That man fired brilliantly past Ronan Tracey from twelve yards. That man had no fear of celebrating his goal. That man was, of course, Darrell O’Kane.

Foreglen seemed to react to the identity of the scorer as much as the goal itself. They responded in the most positive manner.

Kevin O’Connor was not letting it go without a fight. His storming run saw Rian Kealey pull him to the ground along the endline. He got up and sprinted out to the 13’ and with Dungiven sleeping, took a quick free that left James Brolly with a relatively simple finish from 12 yards.

That levelled it with just four minutes to play. But they couldn’t quite get the score they needed to nose themselves in front. They just didn’t have anything to hold on to.

Substitute Fergal McGuigan kicked a 20 yard free wide and it seemed as though the gods, having rescued Kerry earlier in the day, had dressed themselves in green and gold.