The 'Glen see off the Shamrocks 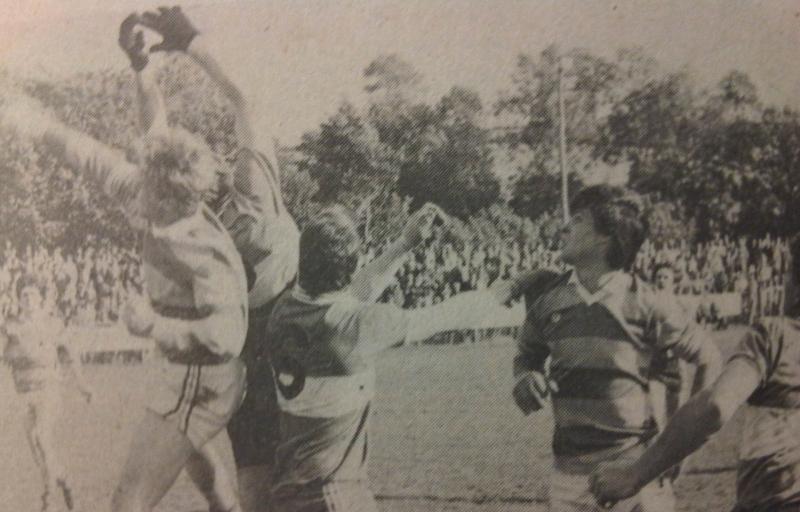 Action from the 1986 Derry SFC final

A Glenullin team, led by their exciting newcomers, ended a 57-year gap to lift their second senior championship in their history, at the expense of Ballinderry.

Referee John Diamond's final whistle signalled the start of the celebrations, as fans spilled onto Ballinascreen's Dean McGlinchey Park to greet their heroes.

Man of the match Declan McNicholl, who finished with 1-5, and fellow wing-forward Dominic Bradley tormented the Shamrocks' defence.

A Brian Duffin penalty cut the margin to three points, before Glenullin found their feet again. Declan McNicholl passed for his brother Colm to score before hitting the last score of the game.

From Danny O'Kane at midfield to Raymond 'Rocky' Conway at corner-forward, all eight of Glenullin's players were U21, coming off the back of two minor titles at the end of Danny McIIvar's impressive underage production line.

By contrast, Ballinderry had 10 of their 1981 Ulster Club winners in their side and were intent in stopping the free-flowing Glenullin side, captained by underage star Dermot McNicholl.

Declan and Dermot McNicholl hit early points to settle any nerves, putting Glenullin into a lead they didn't surrender.

Colm placed Declan for a score, taking Glenullin's lead to three. Ballinderry, on the other hand, were wasteful in front of the posts from both frees and open play.

Aidan Nevin and Pat McGuckin scored for Ballinderry, but it was Glenullin who held the interval lead.

Early in the second half, Terence McGuckin was sent off for a tackle on Dermot McNicholl.  Glenullin's afternoon got even better when Declan McNicholl stepped inside before finishing beyond goalkeeper McKee to the net, to open a 1-7 to 0-4 lead.

Playing with a man less, Ballinderry threw caution to the wind and enjoyed a spell of control. Malachy Wilson and Paul Conway began to get a match on the Glenullin defence. It was the latter who was fouled by Gabriel Bradley and Brian Duffin dispatched his penalty to the net.

With just three points between the team, Conway was on the march again but when Declan McNicholl intercepted before passing to Colm for a score, Glenullin were on their way to the finish line.