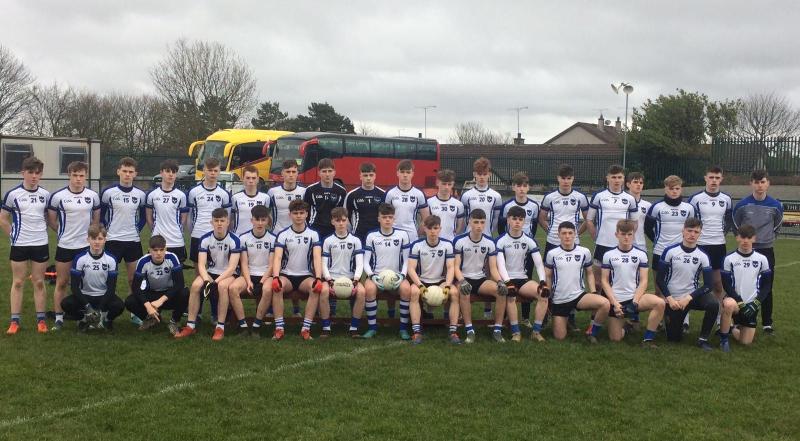 It was a game dominated by a very strong wind although both teams worked very hard to master the conditions.

Maghera had first use of the breeze and their opening ten minutes were exemplary as they moved the ball patiently around the packed Navan rear guard.

Calum Downey pointed a free, added another from play and when Luke Diamond had their third point after only eight minutes they appeared to be in a very good position. However they failed to register another score on the next 20 minutes of play, despite having a lot of the ball.

Two Navan frees closed the gap but still Maghera struggled to improve their shooting despite having so much possession. As the clock ticked in to the red zone, Downey again pointed for a two point lead.

Seconds later though a possession was cheaply lost in midfield and Navan broke in a wave of yellow shirts - second later the Maghera net bulged with the crucial score of the game. Diamond grabbed skate point to leave the sides level at the break, 0-5 to 1-2.

Maghera had an excellent start to the second period when Cathal Chambers fired over from the left. A Navan free almost immediately restored parity on the scoreboard and a second free was followed by a point from wide on the left for a two point lead.

The Ulster champions had their share of possession and the game was back to a single score when Downey again had an excellent point from wide on the left hand side.

Again Navan were quick to reply before a controversial decision to black card Downey, while Maghera were on the attack, took away the teams most likely source of scores.

Credit to St Patrick’s, that Navan could not extend their lead despite the extra player - neither though could St Patrick’s add to their total as they chased the game. Two briefly snatched goal chances in the closing moments of over time were mopped up by a relieved Navan defence and the late, late goal was enough to send them to the All Ireland final.

Navan will play St Brendan's Killarney in the final, following their 0-12 to 1-5 victory over Claregalway College.