Or will it be third time lucky for Sarsfields? 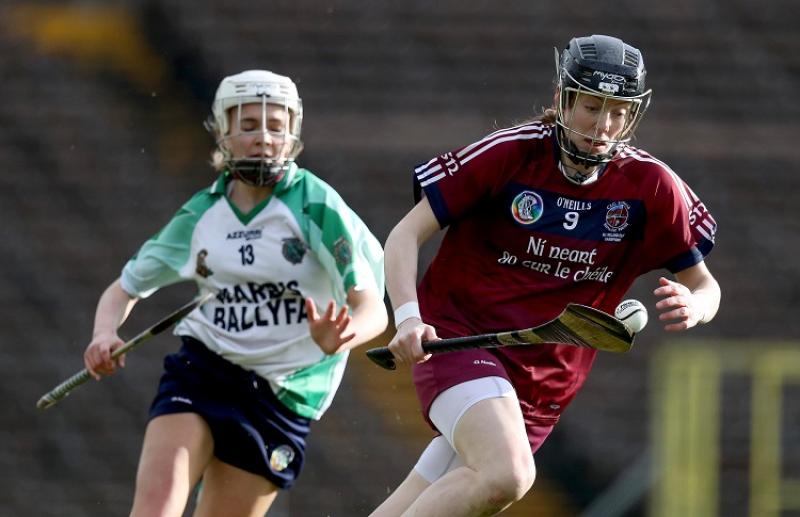 Louise Dougan in action during the 2018 All-Ireland win over Sarsfields at Clones. (Pic: Inpho)

Coverage brought to you in association with TJ Hamilton Cookstown.

Sixty minutes. Once the sliotar is thrown in, a game evaporates in a flash. Yet so much can happen. The helter-skelter of championship does that.

For the camogs of Slaughtneil, they are just 60 minutes away from the upper echelons of club camogie. A passport to the very top of the tree.

A fourth successive All-Ireland title would equal Buffers Alley's feat of the 1980s. The Wexford club won the 1979 title before losing the decider to Cork's Killeagh the following but bounced back to annex the next four titles.

Standing in their way are Michael 'Hopper' McGrath's Sarsfields. The former All-Ireland winning forward's team, - which includes four of his daughters – must be sick of the sight of the Emmet's at this stage.

In Slaughtneil's breakthrough year, Eilís Ní Chaiside's player of the match performance saw her curl over the insurance point and supply the ammunition for Mary Kelly's early second half goal to sink Sarsfields.

The following year, snow stalled the road to glory and by time the game was fixed for Clones, Sarsfields had no answer to new attacking ace Tina Bradley, who rattled up a 1-8 tally, powering Slaughtneil to glory again.

Last year the landscape changed in the form of a new challenger emerging from the west. It was Ardrahan who took Sarsfields' crown but they were edged out by the Derry giants, who defeated Mags D'Arcy's St Martin's in a Croker snowstorm to complete three-in-row.

Slaughtneil's four-year unbeaten run came a cropper in the league last summer at the hands of neighbours Swatragh at Davitt Park. By the time the championship rolled into town, normal service resumed. After a semi-final win over the Davitt's, they slugged it out with Ballinascreen before retaining their title.

From their first All-Ireland winning team of 2017, five players have moved on. Denise McGuigan retired with two All-Ireland medals in her collection. Her cousin Dervlagh had the same return by the time she jetted off for a teaching career in Dubai. Mary Kelly moved to Glasgow after the first title, also to start a new job.

This season, manager Damien McEldowney had to plan without defensive duo, sisters Eilís and Bróna Ní Chaiside who opted to go travelling. Into the defence came Eilís McGrath to cement a place and there was a return for Clare McGrath, who missed out of the 2019 after having a baby.

After a season at midfield, Faoiltiarna Burke opted out of the panel and Cliona Mulholland has slotted into the vacancy. Mary Kelly's shoes were filled by Tina Bradley. Josine McMullan had originally moved from corner back but was converted into a ball winner at full-forward. She lost her place for the Loughgiel game to Olivia Rafferty before a recall for the All-Ireland semi-final.

If McEldowney and his selectors retain the same starting line-up, it will see nine players start all four All-Ireland finals.

Slaughtneil and their highly-respected physio Moira-Jane Devlin will have been thankful of the five week play-off since their win over Scariff-Ogonnelloe. Shannon Graham was forced off with an ankle ligament injury, but manager Damien McEldowney is 'confident' she will be available for selection.

As the Emmet's peek out west, there are changes in the Sarsfields camp from the previous encounters. Yvonne Lyons has been replaced by current Galway club all-star 'keeper Laura Glynn between the posts.

Sinead Cannon has moved from attack to corner back in place of cruciate ligament victim Rachel Murphy. In the other corner is former midfielder Kate Gallagher.

There have been changes to their half-back unit. Erica Leslie picked up a hip injury that kept her out of the 1-11 to 0-7 county final win over St Thomas. She returned for the All-Ireland semi-final.

So too did Maria Cooney. She had her foot in a cast for six weeks following a broken ankle sustained in the second half of their win over St Thomas'.

Tara Kenny tore her cruciate ligament before Galway's All-Ireland final win over Kilkenny in September. Sarsfields' only starter on the winning side was Sarah Spellman and she wasn't without injuries woes, having to get over a broken thumb to play her part in their 1-13 to 0-8 victory over St Vincent's.

The five-week break will have given Leslie, Cooney and Spellman every chance of making full recoveries, which will be a welcome boost as 'Hopper' ponders who picks up Tina Bradley.

His daughters Clodagh and Niamh – who picked up a hamstring injury in the 2018 final – line out in the midfield zone, with Orlaith and Siobhán forming the spine of their attack.

There has been an injection of youth to their squad. Rachel Murray, who played Sarsfields' last All-Ireland final appearance, Cora Kenny who was on water bottle duties in Clones that day and Joanne Daly were all part of last year's Galway minor team. Another newcomer is Aoibhe Deeley who has mixed underage camogie with a career in athletics, where she specialises in the hurdles.

Slaughtneil's defence will be thoroughly tested. Gráinne Ní Chatháin will be the favourite to pick up Siobhán McGrath. Céat McEldowney could go onto Rachel Murray, with Eilís McGrath assigned to Cora Kenny, who scored the match-winning goal in their extra-time win over Mullagh in the Galway semi-final.

It is in the midfield area where the game will hinge. Slaughtneil had a tough physical battle with Scariff-Ogonnelloe, like they did with Thomastown in 2018. Back then, it served them well.

Clare McGrath, Bridín McAllister and Aoife Ní Chaiside will have a huge to roll to play across the half-back line, with Shannon Graham getting back to full power after injury.

They also have their quarter-back, Louise Dougan back in the sweeping role but in her absence from attack puts a huge emphasis on the movement of Therese and Sinead Mellon to provide the link in the half-forward division.

The Emmet's have made a habit of breaking records and who would bet against the Bill and Agnes Carroll Cup making another foray up the Halfgain Road on Sunday night.

Siobhán McGrath v Gráinne Ní Chatháin
In Sarsfields' last three championship games, Siobhán McGrath has amassed 2-27 of her teams combined tally of 4-37. While man come from placed balls, it is her all round play that makes her the pivot of their All-Ireland challenger. Gráinne Ní Chatháin will need the help of her midfield to limit the supply but if she can at least break even in her duel with McGrath, it could tip the scales in Slaughtneil's favour.