Ballinascreen take another step towards the Ulster league play-offs

Lavey, Coleraine and Ballinderry already in the quarter-final draw 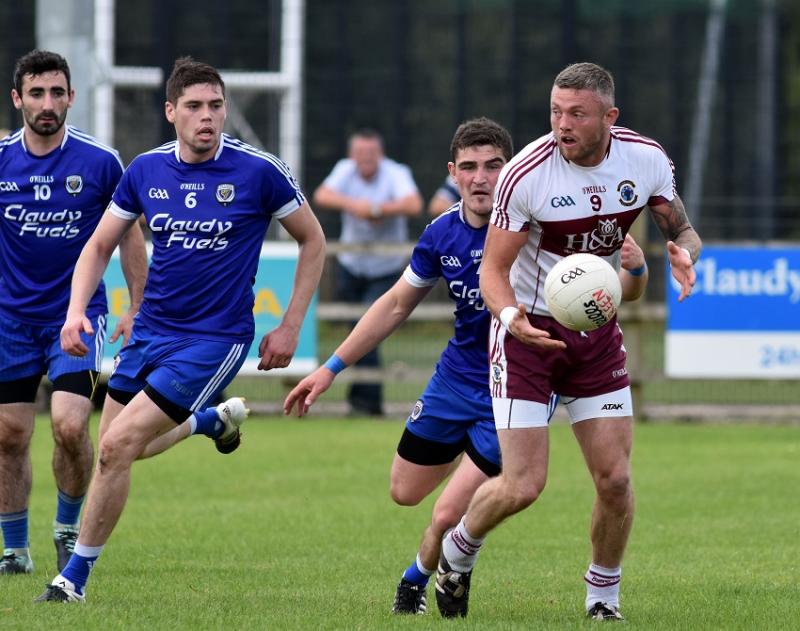 Despite the inclement weather, there were Derry clubs in action last week as the Ulster league took another step towards the play-offs.

The top eight if the 14-team division, after three games, qualify for the knock-out stages and Liam Bradley's men lie sixth (on three points), with a better score difference than St Brigid's who they drew with (2-12 to 4-6) in round two.

Ardboe and Portglenone, under former 'Screen boss Barry Dillon, play this weekend. They sit on two points and a draw would still leave them with a lower score difference than Ballinascreen, who would join Ballinderry, Coleraine and Lavey in the quarter-final draw.

In their clash with Cargin, a strong first-half showing gained the points for 'Screen.

Jon Paul Devlin opened the scoring with a long range point in the first minute of the game before Phillip Bradley added a free after Devlin was fouled.

Cargin added their only point of the first-half after four minutes. Conor McKenna goaled two minutes later, after rounding the keeper.

Conor McKenna, Anton Kelly, Conor McGovern and Ronan McKenna added further scores as Ballinascreen made good use of the wind.

Phillip Bradley added a second goal after 23 minutes, firing to net having rounded the last defender. Niall Doyle finished the first half scoring with another long range score.

Cargin opened the second half scoring with four points, including two marks. Phillip Bradley added score from a free and from play before a Cargin goal brought it back to six points. A cross field pass was intercepted by the forward which left him 1 on 1 and he made no mistake.

Conor McKenna added a further point before a McGovern pass made its way to Ronan McKenna who fired first time to the bottom corner to seal the win.

In the other two games played over the last week, Lavey picked up their third win of the campaign with a 1-11 to 0-11 win over Antrim side Aghagallon. Claudy's interests in the quarter-finals ended with a third successive loss, this time a 2-12 to 0-9 defeat in Ardboe.

Stephen O'Neill missed a first-half penalty but with a wide range of scorers, they did enough to see off the Armagh side.

Colin Letters, who manages the team with Andrew McCartney will hope to make it three from three this weekend against Aghaloo with a quarter-final against Glenullin on the cards.

Greenlough....1-10
Tir na nÓg........1-5
Joe Cassidy's Greenlough side recovered from the concession of a first minute goal to pick up their second win of the Ulster league over Armagh side Tir na nÓg.

They play Banagher this weekend, who have lost their first two games. Greenlough's score difference of +11 and having alread beaten Tattyreagh will take a semi-final spot.

They await the winners of a quarter-final, which could feature Steelstown as possible group B winners and Foreglen as potential leaders of group C.

They led 1-5 to 1-2 at half-time and had the breeze for the second half. Tir na nÓg struggled to get out of defence for large periods and a total of 0-6 from Stephen Bradley helped them to a five point win.

Sarsfields............5-8
Castledawson......0-9
Castledawson finished their Ulster Intermediate League campaign with a defeat against Sarsfields of Armagh on Sunday morning.

Niall Jackman selected a much changed side with many regulars not making the journey this giving an opportunity for some fringe players to stake a claim for a first team spot as the season progresses.

Sarsfields were well drilled and deserving of their victory but there were positives for the ‘Dawson management with the skill, effort and commitment with players brought in.

Best on the day for Castledawson were Andres Laydon, Paddy Henry, Dara O'Kane and Cathal Hughes.

Glenullin picked up a third win, courtesy of Glenravel's concession and as group winners, they will face the winners of this weekend's clash of Ballymaguigan and Aghaloo in the quarter-finals. If the game is a draw, the Tyrone side will top the group of score difference.

Foreglen conceded their game to Donegal side Naomh Mhuire and in the other game in the intermediate division, involving a Derry team, Tattyreagh were 2-11 to 1-8 winners over Banagher.

Limavady.........5-11
Castlederg.........2-6
Limavady maintained their unbeaten run ahead of this weekend's game with Urney, following a comfortable win over Castlederg at Scroggy Road.

A combined total of 3-6 from attacking duo Richard King and Cormac Quigley downed the Tyrone men.

The visitors had the wind advantage in the first half but didn't make great use of it. Limavady led from the beginning and didn't look too troubled throughout the game.

Castlederg got two second half goals which took the bad look off the scoreboard and struggled to hold onto possession for much of the game.

Quigley was dangerous at full forward, Mark McGroarty set up or scored from virtually all his possessions and Tom Deery performing well at full back.