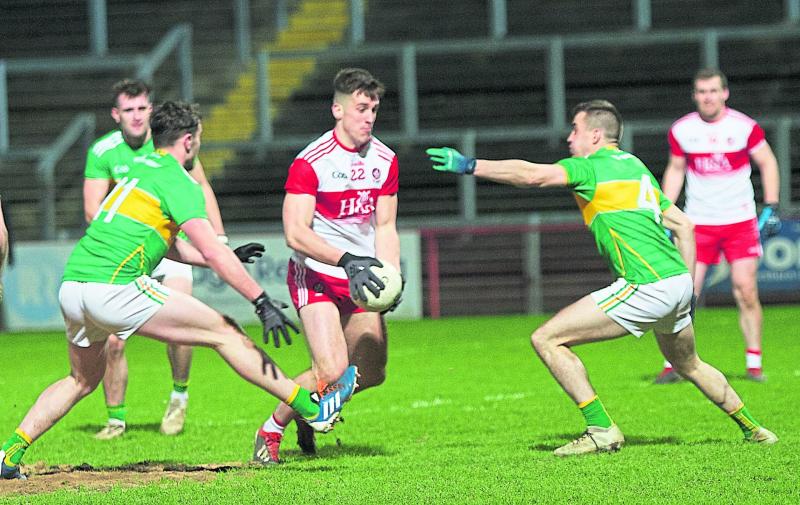 Shane McGuigan has been on fire for Derry recently. (Photo - Tom Heaney, nwpresspics)

A 'big battle in Cork' awaits but first Derry have to see off Louth at Celtic Park (Sunday 2.00), something which is far from guaranteed.

Derry boss Rory Gallagher described the game in Cork as such two weeks ago after he watched his team pick up their win against Tipperary at Celtic Park, a result which was desperately needed and welcomed, despite the performance not being of the highest calibre.

The Celtic Park surface was criticised by Tipp manager David Power afterwards, and whilst that was certainly a factor, it was not the biggest one as Derry struggled to put away an opponent which was down to, on one occasion, 12 men.

Gallagher's side have had a week's break after getting their first win, but they are still playing catch up after a draw against Leitrim and a defeat against fellow promotion chasers Down. They sit on score difference above Down and Tipp but rather than look what's on their shoulder, the Oakleafers are looking up, at both Longford and Cork.

Despite not hitting the heights as yet, Derry are favourites to make it two victories in a row against a Louth side who sit bottom of the table with three defeats from three.

Victory is essential for Gallagher and his players, with a second successive promotion still very much the aim.
The Oakleafers will again look to Shane McGuigan for inspiration this weekend, the Slaughtneil man really finding his form of late, scoring 0-14 against Tipperary and Down combined.

McGuigan will be the main danger for Louth who are still hoping to get off the mark, but with Derry's need arguably greater, the two points should stay at Owenbeg. This will be the penultimate game on home soil with difficult trips to Cork and Offaly sandwiching a huge game at home against Longford.

Gallagher's team may be kicking into gear slowly but if promotion is to happen again, they need to find their rhythm over the next few games, with victory over Louth very much a necessity.