Castleblayney end Claudy hopes of back to back titles 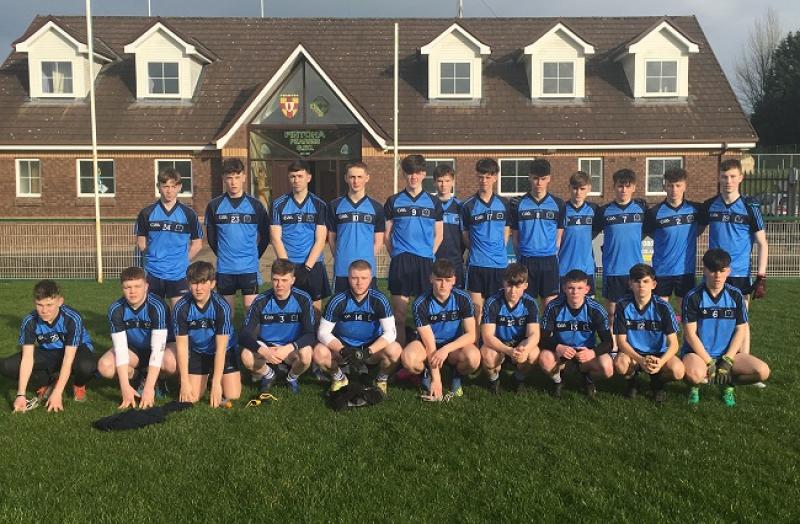 Claudy's hopes of a second successive Pat King Cup title were dashed in controversial circumstances, as Castleblayney College pulled clear in the final quarter of Wednesday's decider in Fintona.

With 10 minutes gone in the second-half Claudy led by a point.  With their defence beginning to get the upper hand the momentum was turning in their favour.

Then everything changed.  The Claudy bench asked referee Mickey McCarron for clarification on the scoreline.  The reported 1-9 to 2-7 was instantly changed on the scoreboard to the official's 1-10 to 2-6, in the Monaghan side's favour.

The winning margin was more than the two point swing and there was ample time for the Derry men to recover but the remaining theme of the story was of uncertainty.

The young Claudy players lost their focus at a critical conjuncture and by the time Matthew Marron's 52nd minute penalty hit the net, their grip on the cup was almost gone.

After the game, Brian Rainey hailed his side's spirit and although they battled back against the odds.

For the most part, it was a terrific contest between two well matched teams but Claudy will always look back on this game with regret.  They will ponder how the game would've panned out had the score not been changed during their spell of dominance.

"When you have team of young lads fighting for every inch of the game, they look up at the scoreboard and they have been docked two points, it is hard for those young cubs to take," Rainey commented after the game.

"Still, they battled on and still they gave everything. Unfortunately, that decision, which wasn't explained - I don't know how it happened or how it came about - I am just very frustrated that something like that can affect the game in such a way."

Claudy carried the underdogs tag but a ninth minute goal from Niall McGonagle gave them the perfect confidence boost. Oisin Kearns-Madden won a kick-out and it was Tiarnan O'Connor's high ball that found McGonagle on the edge of the square before he slotted home.

Matthew Marron, who finished with 1-6, notched two early 'Blayney points but it was Claudy who held the upper hand and were full value for their 1-3 to 0-3 lead after 15 minutes.

A mark, called by referee McCarron, saw Niall Rice reply for the Monaghan men who swiftly scored again after McGonagle spilled a kick-out and Joseph McMahon passed to Rice for another score.

An energised Castleblayney side were level though Marron before centre-back Liam Martin put them into the lead for the first time after 27 minutes.

However, it was Claudy who finished the half strongly. McGonagle, who played at midfield for the second quarter, floated a perfect ball to O'Connor who cleverly snaked inside the 'Blayney cover before firing to the roof of the net, helping his side go in at the break 2-4 to 0-7 ahead.

Like he did at the start of the first-half, O'Connor won the breaking ball from the throw-in but Claudy's move broke down. It was 'Blayney who hit the first two scores of the second-half, from Rice and Marron.

A touch of McGonagle magic from an acute angle saw him squeeze over a point before the Monaghan men hit the net.  Dylan McKenna made the catch at midfield and at the end of the move, Rice raced clear.  Despite the clutches of Ben Cooke, he blasted to the net, giving goalkeeper McCormick no chance.

In the next play, Claudy almost found the net and could've had a penalty. Adam Murphy passed to Niall Barr who squared the ball for the in-rushing Keelin Hasson who was impeded by goalkeeper McCully in the goalmouth.

Play continued before Claudy were awarded a free in and Hasson was replaced with a head injury. McGonagle's free tied the game once again.  The Dungiven man then slotted over the bar, with a hint of goal on, and Claudy were back in the lead.  Or so they thought.

After the score was changed, Claudy were shell-shocked and Castleblayney took full advantage. Marron slotted home a penalty, with defenders Nathan and Zachary McArdle chipping in with points.

McGonagle had a close range free blocked by a wall of 'Blayney players and O'Connor saw a late shot blocked by 'keeper McCully as the brave Claudy fightback came up short.