REVEALED: The DerryNow.com GAA team of the week

The star performers from a week of action 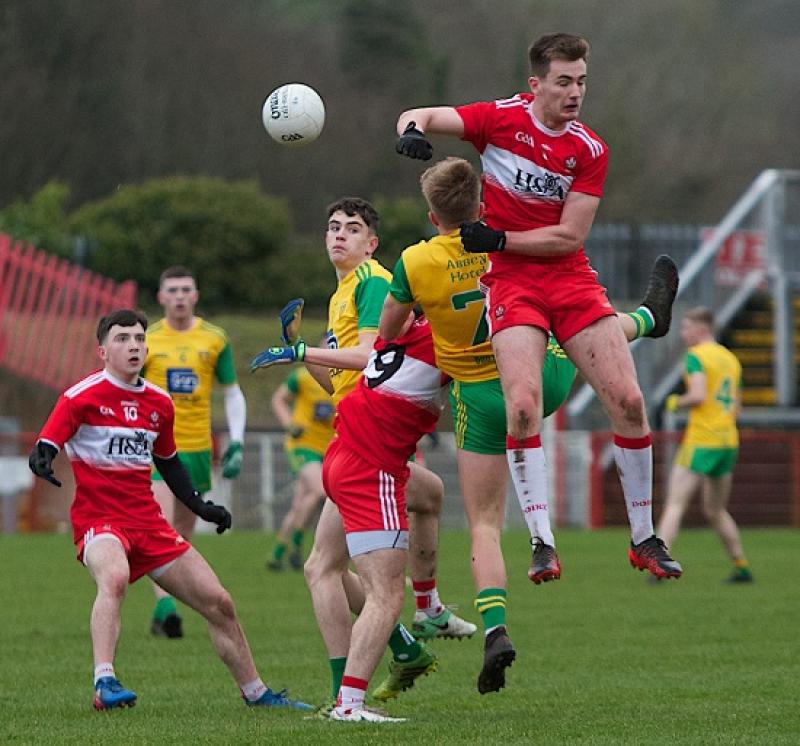 1 – Ryan Scullion (Derry U20s)
The 'Screen netminder made a point-blank save to deny Aaron Doherty a goal that would certainly have won the game for Donegal in the closing stages. His kick-outs were varied and accurate.

2 – Karl McKaigue (Slaughtneil)
Adrian Mullen scored 3-14 in Ballyhale's campaign but McKaigue kept him to just two touches in the first-half before also holding Eoin Cody scoreless after the break.

3 – Shane McGuigan (Slaughtneil)
Tasked with picking up TJ Reid, McGuigan held him to a point from play and followed him when he went to full-back after half-time.  An imposing performance.

4 - Pearse Dallas (Coleraine)
Dallas held Conaghy's Bill Murphy scoreless in Saturday's All-Ireland semi-final. As his side gathered early second-half momentum, he got involved in their plans.

5 – Enda Downey (Lavey)
More renowned as a forward, Downey basked in the freedom of a role at wing-back where his relentless workrate helped Lavey build from defence.

6 – Gerald Bradley – (Slaughtneil)
Swept up a series of Ballyhale attacks in the first-half of Sunday's epic All-Ireland semi-final clash. Pushed up on Ronan Corcoran for Dean Mason's puck-outs.

7 – Conleth McShane (Derry U20s)
McShane was the dynamo in the middle third for Derry U20s' draw against Donegal. He saw a goal chance come off the post and passed to Tiarnán McHugh for his goal.

8 – Chrissy McKaigue (Slaughtneil)
If anyone wanted to know the pitch of Slaughtneil's challenge, they needed to look no further than the skipper's opening point and he led by example throughout. He was dominant on Conor Walsh before the Ballyhale man was replaced at the break.

9 – Jamie Duggan (Lavey)
For the second game in a row, he blotted out the opposition's star man but his time he weighed in with two points to put Lavey on track for Ulster glory.

10 - SL McGoldrick (Coleraine)
Landed 0-9 in the Eoghan Rua cause and played deep to counteract the Conahy midfield influence but was still able to contribute to their attacking game.

11 – Finatan Bradley (Derry U20s)
Bradley was an effective link in Derry's half-forward line. He handled more than his fair share of possession. Was moved to centre-back late on and the Oakleafers missed him when he was black-carded.

12 – Kealan Friel (Derry U20s)
The Bellaghy man thumped over a brilliant score but wasn't afraid to muck in and work. His long kicking bypassed Donegal's sweeper and he used his strength to stop the runner in the first-half.

13 - Calum Downey (Lavey)
For the third game of Lavey's run to Ulster glory, Downey was the fulcrum of their attack. Every ball played in stuck to him and he scored two vital points of his own.

14 – Brendan Rogers (Slaughtneil)
Rogers started inside but still was able to peel wide and win puck-outs. He scored a point off his left side, before hitting a wonder score off this right at the end of a lung-busting run and his individual goal gave Slaughtneil a chance of victory late on.

15 - Brian Cassidy (Slaughtneil)
Cassidy kept his best performance of the season for the biggest challenge that came knocking on the Slaughtneil door. Pinged three points and put Richie Reid on the back foot throughout. Worked hard to cover midfield when Gerald Bradley dropped back.