Coleraine hurlers facing a Kilkenny challenge on their All-Ireland trail 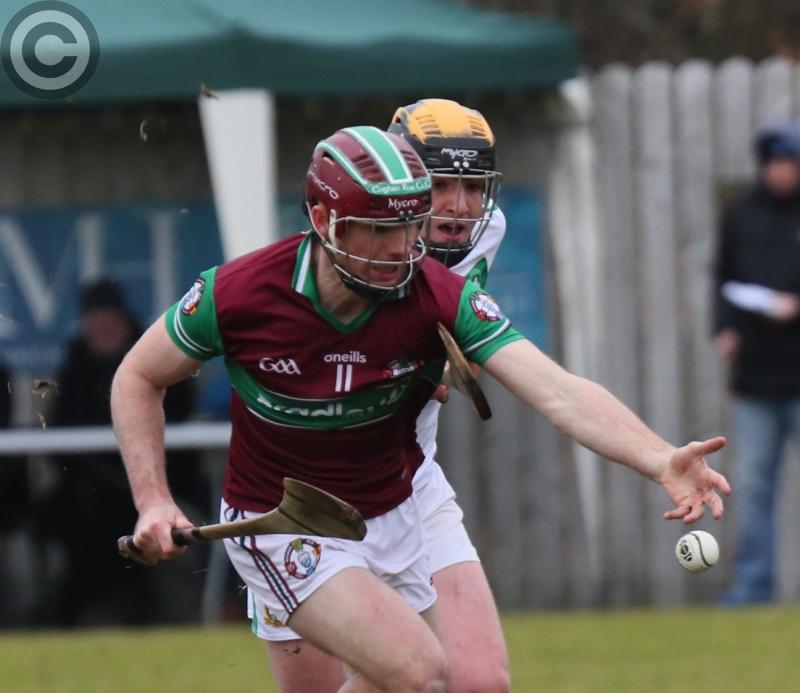 The hurlers of Eoghan Rua Coleraine will be hoping to make it a happy new year as they take on Kilkenny representatives Conahy Shamrocks in this weekend's semi-final clash in Inniskeen.

The Derry champions would have afforded themselves a wry smile when the opposition was revealed. Their last foray into the All-Ireland series ended at the hands of Kilkenny opposition as Glenmore left Croke Park as champions with just two points to spare.

Throughout their campaign, Coleraine have been consistently on message – one game at a time – but the unspoken aim has been to get back to Croke Park and make amends. After they brushed aside Warwickshire champions John Mitchel’s in the All-Ireland quarter-final, manager Brendan McNicholl was already turning his attention to the next round.

“That’s us into the Semi-Final - where we wanted to be at this stage of the year. We’ve always wanted to get back in again because we feel we left one behind us in Dublin.”

Their performances to date give them every chance of returning to the Jones’ Road stage.

In the Derry Final, they had Ruairí Mooney’s 0-4 to spare over Na Magha after their only conceded goal of the campaign had taken some of the gloss off what was a commanding victory.

They were ruthless in the opening round in Ulster as they crushed Mullahoran. Ciaran McGoldrick’s late goal polished off a 1-27 to 0-6 mauling of the Cavan side before they sealed their place in the decider with a facile win over Monaghan’s Inniskeen in the semi-final.

A stiffer test awaited in the final as Newry Shamrocks roared out of the traps, going point-for-point with the Derry champions until a late first half burst set the tone for the second. With Sean Leo McGoldrick in unstoppable form, they dominated 14-man Newry to regain their Ulster title.

Having dispatched John Mitchel’s in the All-Ireland quarter-final, Eoghan Rua waited patiently for the outcome of the Leinster JHC Final and the match threw up Conahy Shamrocks as their Semi-Final opponents.

While Eoghan Rua were within a whisker of an All-Ireland title back in 2016, their opponents this weekend have tasted the ultimate success in the competition. The Shamrocks were champions in 2008 after beating Moyle Rovers of Tipperary in the Final.

The Noresiders opened their 2019 campaign with a comfortable 1-17 to 0-7 win over Mooncoin with full forward James Bergin responsible for 1-14 of their total. The full forward was again on form in the Semi-Final win as the Shamrocks booked a place in the decider with a 0-25 to 0-17 win over Slieverue.

Conahy narrowly suffered defeat in the county final at the hands of O’Loughlin Gaels, but with the city men ineligible to continue in the competition, the Shamrocks entered the Leinster series.

Despite an injury to captain James Bergin, the Kilkenny side navigated their quarter-final and Semi-Final ties with ease, dispatching Fingallians of Dublin and Longford’s Clonguish on the way to a final meeting with Ballygarrett of Wexford.

The returning Bergin hit 2-4 as Conahy defeated Réalt na Mara in a thrilling Leinster Final but the Kilkenny side will need to avoid a repeat of the indiscipline that handed 1-9 to opposition free-taker Jack Hobbs.

Oakleaf champions Eoghan Rua are among the fittest Junior sides in the country and have been honing their focus ahead of this weekend’s game. Captain Ciaran Lagan insists his side are raring to go.

“Preparations are going well. We’ve been using the facilities in Dunloy a couple of times a week on top of our own training so the touch has definitely improved.”

“Obviously, with the earlier matches this year, Christmas has been a bit different but we wouldn’t want to be anywhere else.”

Lagan is an important part of a watertight Coleraine defence that have conceded just once in over 300 minutes of championship hurling in 2019 – a goal that the perfectionist corner-back feels could have been prevented.

“The goal we conceded against Na Magha could have been stopped if we’d kept our concentration. Kevin (McCarry) and Barry (McGoldrick) are very good at communicating at the back and the midfielders and forwards put pressure on up the field which makes our job easier.”

Eoghan Rua’s attacking thrust is clinical. Sean Leo McGoldrick has a championship haul of 1-40 to his name, while Ruairí Mooney has hit an impressive 2-20 from full-forward.

With Anton Rafferty and Niall Holly raiding from both flanks and half-backs Aidan Boyle and Ciaran McGoldrick arriving late to finish moves, they pose a formidable scoring threat.

In Sean Leo McGoldrick and James Bergin, both sides boast a marquee forward and as is the case with many games at this level, the outcome could rest upon how well they are curtailed.

Both teams have hit an average of 23 points per game but the Derry men have a slight advantage on score difference with +69 to Conahy’s +52 and with that defensive frugality added to their greater spread of scorers, they may well be preparing for a second All-Ireland JHC Final in four years after this weekend.

Although the spread of Coleraine scorers has been varied throughout their campaign, McGoldrick has shone with 1-40 to his name – 38 percent of their 4-101 total. As well as his score-taking ability, the centre-forward’s vision and movement are key.

Sean Leo puts the opposing centre back in the age-old conundrum – should I stay or should I go? He opens defences by dragging his marker from the centre and mixes his passing well, finding both runners off the shoulder and darting corner forwards.

Not only does he contribute himself, but the distraction a forward of his quality poses creates space and time for Coleraine’s other dangerous attackers around him. A nightmare to play against.

Despite missing the Leinster Quarter-Final and Semi-Final, Bergin managed a 4-44 haul, 41 percent of his team’s overall score. The talented full forward captains the side and leads by example with scores from both frees and play.

The Shamrocks captain has represented Kilkenny at Intermediate level and received a Higher Education GAA Rising Star Award for his performances for DCU in the 2019 Fitzgibbon Cup.

He is a dangerous attacker with bags of potential and he will no doubt produce a fascinating battle with the experienced former Derry dual star Barry McGoldrick on the edge of the Eoghan Rua square.

Paths to the Semi-Final