Derry manager Rory Gallagher felt his side were 'naive' at times as his managerial debut ended in a McKenna Cup defeat to Monaghan at Inniskeen. 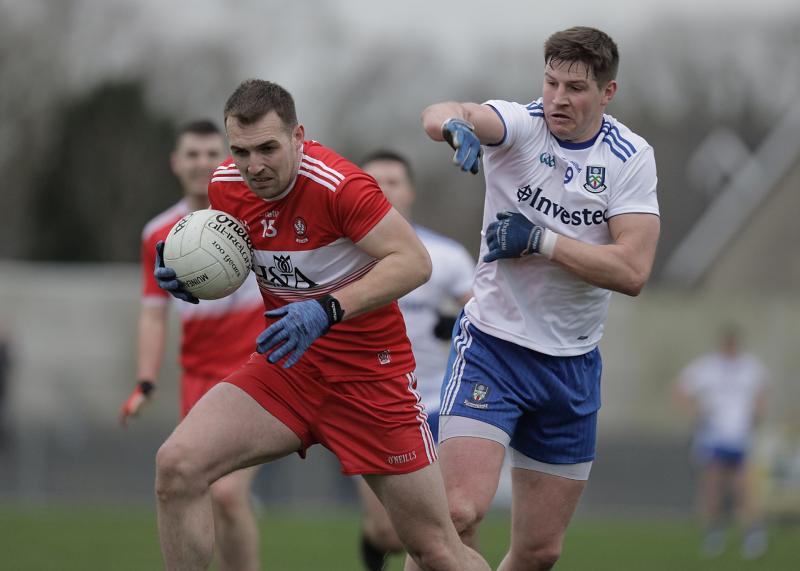 Derry manager Rory Gallagher felt his side were 'naive' at times as his managerial debut ended in a McKenna Cup defeat to Monaghan at Inniskeen.

A poor start and a poor finish book-ended this Derry display as Monaghan started and finished strongly to take the win and leave Gallagher in reflective mood afterwards.

“I felt after a very poor beginning in which we looked very nervy and very shaky we played very well for the rest of the first half and for the first 15 minutes of the second half,” he said. “I thought we were in a position to go on and win the game so I'm disappointed that we didn't do that.

“It was a very poor start and if it goes much further than that (than 1-3, 0-0) it's almost unassailable. I was pleased that we dug in manfully and probably threatened a couple of goals. We got ourselves into a great position.
“I thought we played really, really well and controlled the game up until the midway point through the second half but we were caught with a couple of our own kick-outs and after that the game ran away from us a bit.”

Gallagher, without a full squad of players available due to injury, named four debutants in his team yesterday, and he agreed that it was valuable experience for the players involved.
“We knew we had a number of young players and we knew there were players who haven't played an awful lot as well,” he explained. “We are very excited at the quality of the boys who we have to run in.

“There's Jack Doherty who's just coming back in there and there's Niall Loughlin who wasn't right to play and obviously Shane McGuigan to come in as well. We do feel that we have good players up front so it's just a matter of working with what we have at the minute.

“That's the thing about the McKenna Cup, you're accruing experience and getting ready for the league.”
Gallagher was far from downbeat despite the result, and with Donegal still over a week away, it gives both him and his players time to reflect on where they went wrong against Monaghan.

“I thought they showed an awful lot of maturity and know how and Division One know-how but we didn't,” he stated.
“We were very naive and that was reflected in the way the game fell away from us not only in the second half but at the start.
“I think we put so much into it – the energy we put into coming back from 1-3 down to leading something like 0-11 to 1-5, that was a massive turnaround. We then gave away a couple of scores very cheaply from our own kick out and that kind of deflated the boys a wee bit.

“I was delighted for 40 minutes of that game. I thought we were outstanding and that we controlled the ball and we really looked a threat.
“I thought there was tremendous leadership from the likes of Shea Downey, Paudie McGrogan, Ciaran McFaul and Emmett Bradley who's only back so there's an awful lot to work on.”