Lavey minors step into the unknown

Hassan feels his side are in 'bonus territory' 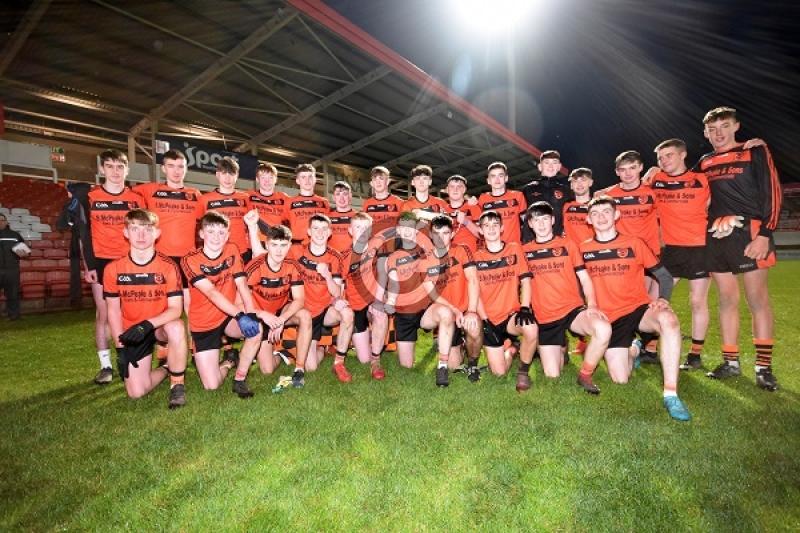 Mid-December in the club calendar means only one thing, a trip to Belfast and Lavey will hoping it will turn into a Christmas spent on the Shaw's Road pitting themselves the cream of Ulster's underage.

Of the 37 times St Paul's have hosted their highly popular minor tournament, the cup has been taken back across the Bann on 16 occasions.

Glen's four in a row stands out, Ballinderry also have four titles while last year's triumph was a third success for Bellaghy, who defeated Lavey in the county final.

“We are looking forward to it, it is a great tournament and we have looked on at other Derry teams being successful,” commented Lavey manager Michael Hassan, who was recently appointed as the club's senior manager for next season.

In recent years, the Lavey underage regeneration has saw them back in Grade 'A' again after a spell in the doldrums. They have begun to churn out players on school and college teams with regularity.

The recent U21 winning team represented the first batch to make it through, which bolstered their run to the 2018 county senior final.“It seems to be very professionally run and you are up against the best teams in Ulster. Our aim at the start of the year was to get back to a county final. We did and won it, so we are in bonus territory.”

The current Lavey minor team were Féile champions. In recent years. back to back U16 championships were secured. They lost to Carrickmore in the final of the Paul McGirr tournament last year and have been successful at Óg Sport.

Also, this season, they won the minor hurling championship thanks to a mesmerising display of free-taking from Enda Downey to edge out a fancied Ballinascreen team in the final.

In football terms, seven of the current side played in last year's defeat to Bellaghy but barring Ryan McGill and Cormac Collins, the other 13 players expected to start on Saturday will be eligible next season.

Four of the starting team, Patrick McGurk, Rory McGill, Niall Duggan and Segdae Melaugh – are currently in their first year of U16.

Others have dipped in and out, but the underage scene in Derry has, largely, been the Bellaghy, Lavey and Magherafelt show in recent years.

Lavey needed extra time to see off Magherafelt before defeating Glen to win the first minor title since the 1983/1984 teams managed by current Chairman Paddy Chivers.

In the county final win over Glen, it was Lavey's hunger on the breaking ball that gave them a platform to control the game.

Cormac Collins and Jamie Duggan are a formidable midfield pairing. James McGurk almost single-handedly dragged Lavey back into their U16 final with Carrickmore last year and he is an effective leader of the attack.

Their inside line is likely to feature the Downey trio, Matthew, Enda and Callum. Matthew is likely to play up front.

If Lavey's midfield can win enough ball to allow Enda to play inside with him, it will be a cocktail that will pose a serious threat. In the recent Rannafast final, Calum Downey and Patrick McGurk handed more ball than most others on the park and if they can link the play from defence Lavey have the tools to break free.

On Saturday, Lavey are in action against Cavan champions Drumloman Gaels, an amalgamation of Mullahoran and Ballymachugh. They come into the Ulster scene on the back of winning the Cavan U17 championship, therefore won't have played together as a group until Saturday.

At midfield Liam Corr and the free-scoring Caolán O'Reilly will pose a threat to Lavey, while their attack centres around Shane Tynan.

Lavey's defence will need to get to grips with Tynan, with the dangerous duo of Conor Coyle and Matthew McGahern the benefactors of any link play from midfield.

“We are going into the unknown. Like we did every other year, we have done a bit (of research) on other teams but we'll be concentrating on our own performance, at getting to that level we need to be at,” Hassan added.

“From the Glen game, there are things that didn't go right and we worked on that at training. We are trying to concentrate at getting to a higher level than we did against Glen and see where it takes us.

“In the county final, the support we had was like an extra man to the players and I have no doubt it will be the same next Saturday.”

It will be eight weeks since their county final and after two weeks off, challenge games and gym work was factored in to 'freshen' things up.

“The lads have their batteries recharged.  It has been a tough year and with winning the hurling and football, they needed a bit of a rest. They look fresh physically and mentality at the minute,” Hassan continued.

Calum Downey had his leg strapped in the recent Rannafast final but the Lavey boss confirmed all his players will be '100 percent' ahead of this weekend.

Last year Bellaghy took much of the first-half to get to grips with Dunloy in their first game. If Lavey can do likewise in this year's opener, they have the attacking power to advance to the last four.

The road to St Paul's