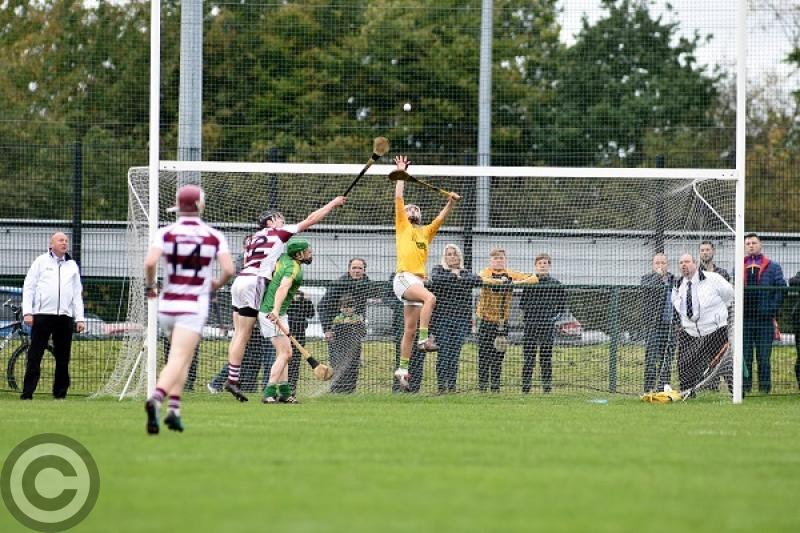 Two years ago, 6,142 souls packed Owenbeg to the rafters as Slaughtneil hosted Dunloy and it will be a case of ‘last one out, turn out the lights’ this weekend as both parishes converge for an eagerly awaited rematch.

For most of the opening quarter of the 2017 instalment, Slaughtneil were treading water but once they galloped into their rhythm they swatted Dunloy to one side.

It was earmarked as the first of many battles between the clubs, with both clubs’ production lines bearing fruit.  Two years on and with Eoin McNicholl further into his Strength and Conditioning programme, the Cuchullains are a more robust outfit.

Former attacking ace Gregory O’Kane is still at the helm as boss.  They needed two last minute saves from Ryan Elliott and Paul Shiels to hold off a stiff Loughgiel surge in the semi-final.

In the Antrim decider it was O’Kane’s use of the bench that paid dividends.  Gabriel McTaggart’s catch and pass setup fellow impact sub Seaan Elliott for the first of his two goals.

Elliott’s older brother Nigel scored Dunloy’s first goal and it was his assist that put Seaan through and his persistence saw him weave through a maroon wall to squeeze goalwards for a 3-16 to 2-15 win.

It remains to be seen if Dunloy’s management keeps faith with the starting 15 from their win over Ballycran.  The only change from their county final team was Conor Kinsella coming in at corner back for Aaron Crawford.

Dunloy have used 25 players in all across their four championship outings, while Michael McShane has used 19 players between their wins over Lavey, Kevin Lynch’s and Middletown.

A concern for Slaughtneil will be their lack of goals, something they used to cripple teams with early in games in the Derry championship.  Only Gerald Bradley, Brendan Rogers and Sé McGuigan have found the net with the latter needing a slice of luck against Ballycran.

On paper, 14 different Dunloy players have scored across their five championship games.  Their scoring average has been 2-17 for and 1-13 against.  In that run, they had three tough tests against Loughgiel and Cushendall (twice) on their way to lifting the Volunteer Cup.

On the other hand, the Emmet’s have amassed an average of 1-23 per game, while shipping only 1-11 on average in their three outings thus far.  Their 1-32 tally against Lavey figures prominently in the stats, a day they lost Cormac O’Doherty but played with 14 players, rather than waste a sub, such was the facile nature of the victory.

In the final against Kevin Lynch’s, Tiarnán McHugh’s goal after half-time backed Slaughtneil into a corner.  They passed their acid test.  It took time but with no shortage of guile and composure, they kept plugging away before Rogers found the back of the net to seal a seventh successive title.

And failing any drastic semi-final speed wobbles, this was always going to be the final pairing.  In their pomp. Slaughtneil were masters of timing their run through the championship.  Last year the cracks began to appear and Ballycran pulled the chair from under them in a landslide win.

Sunday will be a third championship meeting between the clubs.  As it stands, the honours are even but Slaughtneil if are to land a third Ulster title they will need to look deep inside themselves.  To the Loughgiel final of 2016 when they outthought and outworked their opponents.

A day when the spirit Thomas Ó Caiside engrained in the majority of the side at some point along their careers, catapulted them into the realms of dreamland and a first Ulster crown.  A day when Michael McShane has his homework to perfection and Chrissy McKaigue ruled the roost.  Sunday is the time to rediscover that.

The inside line thrives on Sé McGuigan, Rogers and Brian Cassidy’s rotation policy.  Likewise Dunloy, with the free-scoring Keelan Molloy playing the playmaker, while also ghosting inside.  Conal Cunning and Eoin O’Neill tend to operate inside, with Nigel Elliott’s running game punching holes.

Parking the Middletown game, this is the first pressure cooker game since the Emmet’s bowed out of the football championship against Glen.  A hurt that will never go away.  Not until the next seismic victory.
Dunloy have carried baggage since their 2017 trimming at Owenbeg.

A lot of the signs point towards a Dunloy win and the numbers back it up.  But their game relies on space that Slaughtneil won’t afford them.  And championship is all about showing up then the questions are being asked.

Karl McKaigue will have a marking job on Keelan Molloy and Chrissy will need to flirt between getting forward to provide an overlap and sitting back as the defensive midfielder.

Dunloy have coughed up goal chances through the Antrim championship.  If Slaughtneil’s inside trio of Cassidy, Rogers and Sé McGuigan can raise a green flag, it might be enough to see them home, by two.

The captains’ impact on each other and their respective opponents will sway who gets to lift the cup.  Both have chipped in with scores over their run to the final.  McKaigue came out on top two years ago and will need more of the same on Sunday.  His positional sense is a given at this stage.  He can smell danger and drop back but if he can get on the attack he will energise those around him to follow.

(1) – MIND THE HOUSE – In the absence of an out and out sweeper, Ballycran allowed Keelan Molloy the freedom of the park.  As well as scoring 1-13 from play this season and he creates chances for others.  Slaughtneil tend to operate with a two man half-forward line with Mark McGuigan shuffling back when Chrissy McKaigue drops back.  Karl McKaigue will almost certainly pick up Molloy.  But it’s the space he creates that will also concern Michael McShane.  If Shane McGuigan continues at full-back, then Sean Cassidy and Chrissy McKaigue will always need to man the centre.
(2) – ‘KEEPING THE OPTIONS OPEN – One of the first decisions Michael McShane made as Slaughtneil boss was to convert Oisin O’Doherty into his goalkeeper.  Last year, O’Doherty opted out and his loss was colossal.  He made an appearance in goals during the league this season but a broken finger on the eve of the championship paved the way for Morgan McEldowney to wear the number one jersey.  It would be a tough decision on the mouth of an Ulster Final but O’Doherty is back in training.  His experience and ability to play as an extra defender could see him figure in Slaughtneil’s selection thoughts this week.
(3) – THE MIDDLE CHANNEL – Nicky McKeague tends to filter towards midfield, with natural defender Kevin Molloy dropping back towards the defence.  Dunloy will need to decide if Ryan McGarry follows Cormac O’Doherty.  If he does then Slaughtneil can get at the Cuchullian’s defence and create an overlap.  If the conditions underfoot aren’t conducive to playing an early ball then Brendan Rogers and Jerome McGuigan could interchange, allowing Rogers to attack Dunloy’s defence.
On the other side of the equation, Nigel Elliott is very direct and with 2-5 to his name, he will need attention, with Meehaul McGrath the likely option.
(4) – BENCHMARK – Impact sub Seaan Elliott’s two goals won Dunloy the Antrim title but Gregory O’Kane held him in reserve against Ballycran.  His balance, vision and an ability to create a score out of nothing may be his downfall as he could now be termed as a finisher – coming on when the game opens up.  With the injury to Paul McNeill, this will be a concern for Slaughtneil and they will need to have a plan in place for him.
(5) – BATTLEGROUND – When Slaughtneil lost the 2015 Ulster Final to Cushendall, they were missing Gerald Bradley’s ability to win puck-outs on the wing.  Fast forward to the 2017 clash with Dunloy and his was immense.  Mark McGuigan could well slot into midfield on Kevin Molloy, with Jerome McGuigan getting a height advantage over Eamon Smyth with Gerald Bradley counter-acting Kevin McKeague.
On their own puck-outs, Ryan Elliott, while he has variation, tends to look for the left wing first before switching to the right, but rarely goes down the middle.