Duffy loves the roar of the underdog 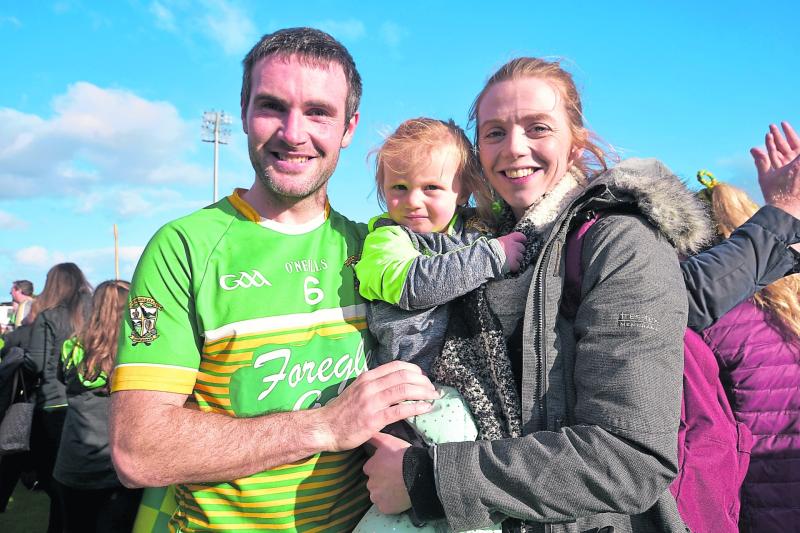 Oisin Duffy with his wife Meabh and their daughter after the final whistle on Sunday. (Pics: Mary K Burke)

Amongst a sea of green and gold, Oisin Duffy took a moment to step back and take it all in.
The man who was such a driving force behind Foreglen’s route to the championship final, who has been a backbone of their clinical attacks from defence, seemed like the calmest man in Celtic Park. Or perhaps he just couldn’t quite believe what he was seeing.
“We were talking about doing it for the parish during a meeting on Saturday and there was a video of near enough everybody in the community wishing us well and wishing everybody good luck – whether it was brothers, sisters, friends, mums, dads, children, everyone was on it,” Duffy told the County Derry Post. “It’s not about us, it’s not about the players, it’s everybody in the community and in the club house we celebrate it together.
“Winning championships is great, I love it, but I only love it because it brings everybody together, the whole community, and that’s what it’s all about.”

RUB OF THE GREEN
In a game that was so nip and tuck in the first half, with Foreglen leading for less than a minute and down a point at the break, Duffy said they believed in their plan all the way, with the underdogs tag only adding incentive.
“To be honest I found it a bit bizarre how strong of favourites Claudy were against us. Nobody really gave us a chance,” stated the defender.
“Somebody told me that the bookies had us at 2/1 and they were odds on favourites, but nobody in our changing room would have had them as that.
“We knew the depth of our squad, the players that we had to come in there, and the competition for places. We knew it was going to be a tight game, we knew it was going to be 50/50, but maybe that added a wee bit of incentive – the fact that nobody gave us a chance.”
He continued: “We got in there at half-time and we knew there was a big wind and that if we held our shape as best we could in the second half then we would be hard to live with, and it worked out that way.
“We just set up really well at the back and then had the platform to break forward. I saw halfway through the second half as well that Marty Donaghy was holding his arm, so it was probably a big loss to Claudy offensively when he wasn’t firing on all cylinders with the injury.
“Again, you get the rub of the green some days. Big Mark McCormick hit two wonder scores from the sideline and whenever those go over you know it’s going to be your day, so we’re delighted.”