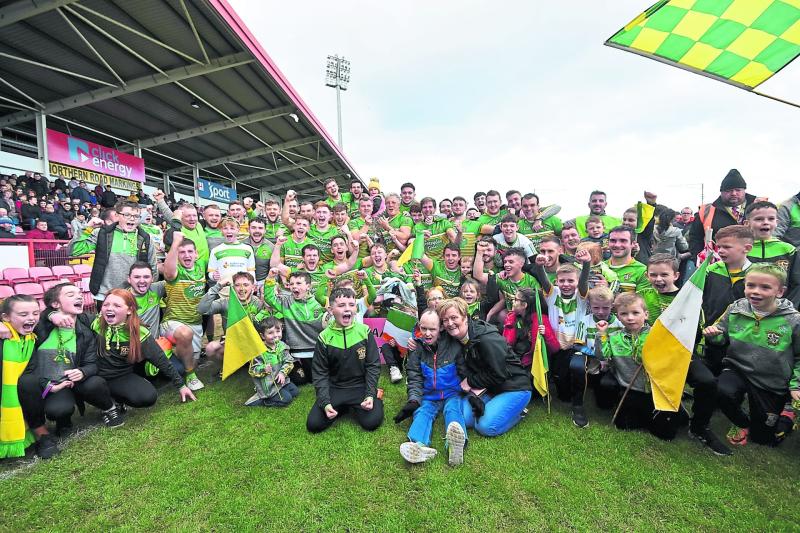 A joyous day for the players and community of O'Brien's Foreglen as they hold the Bateson, Sheridan and Lee Cup. (Pics: Mary K Burke)

Foreglen put in a breath-taking second-half display to upset the odds and claim their fourth championship, and a first since 2013.
Damian O’Connor’s men executed the perfect game plan to dispatch of league champions and rivals Claudy - whose 13 year wait for a win over the O’Brien’s goes on – holding them to a solitary score in the second-half as Eoghan Duffy led the charge to a comfortable victory.
With the wind against them in the first-half, Foreglen did brilliantly in defence to thwart Claudy, with Oran Armstrong the only real shining light for the Mitchel’s.
In the second-half, Foreglen really came into their own and silenced the critics that gave them no chance in the build-up. Sean O’Connor moved on to Armstrong to shut down his threat, while Marty Donaghy’s influence waned after he sustained an arm injury.
In contrast, Foreglen only grew in confidence as time ticked on, with Mark McCormick and Kevin O’Connor clinical from the dead ball, while Ciaran McFeely made a huge impact off the bench.

BREATHLESS
Claudy made two changes to their listed team, with Callum McElhinney in at full-back for Cory Armstrong – tasked with picking up Kevin O’Connor – while Conall White was in for the injured Shane McGahon, acting as the sweeper alongside Stephen Farren and pushing Paddy Hargan into midfield on Mark McCormick alongside Eoin McGahon.
Caolán and Cahir O’Connor were the men inside for Foreglen, watched by Fionain Smyth and Jamie Brown respectively, and it allowed Kevin to pull out and create the space with his movement.
Conor Johnston squared up to Kevy Dunne, but also acted as the plug in the centre of defence alongside McGahon to stop Oisin Duffy’s runs from deep – with Marty Donaghy pulling out onto the ’45 to add his experience.
Shea Kerrigan started as the lone man inside, with Cathal O’Hara doing the marking, but Claudy rotated the play – with Aaron Kerrigan and ‘Nugget’ both moving in there at different times.
With the wind in their favour, the men in blue opened the scoring with two minutes gone, with Marty Donaghy spraying a crossfield pass to younger brother Aaron, and he had time and space inside the ’45 to turn inside and chip a right-footed effort over the bar. Aaron Kerrigan doubled the advantage on four minutes with a well-struck free off the ground from the right sideline after Paddy Hargan was fouled.
It was the tried and trusted who got Foreglen on the board seconds later when a quick burst of pace through the middle saw Oisin Duffy feed Kevin O’Connor, and he turned away from Callum McElhinney before pointing.
A patient O’Brien’s move was ended with a Conal White interception, and it sent the Mitchel’s away. Marty Donaghy took possession on his own ’45 and ran all the way into the Foreglen half before palming off the attentions of Eoghan Duffy and sending over a fantastic score – 0-3 to 0-1.
Pauric Morahan was next to show his pace as he evaded Stephen Farren and Aaron Donaghy down the right before finding Caolan O’Connor, but his attempt from 25 metres was controversially waved wide.
Foreglen were enjoying a period of pressure after a slow start, and they reduced the gap to one on 12 minutes when a Morahan free was worked into the corner, and Cahir O’Connor turned away from Jamie Brown before fisting over from the angle, with the goal on.
Aaron Kerrigan took his tally to two in the 14th minute when Paddy Hargan recovered after an initial fumble to get the ball through to the forward ahead of McCormick – who wanted the foul in midfield – but Kerrigan advanced on goal and chipped it beautifully over the bar while off balance.
Oisin Duffy’s runs from deep were being thwarted well early on, but he was stopped illegally by a heavy hit from Stephen Farren on the quarter hour mark. Barry Cassidy played the advantage and Liam O’Hara picked out Kevin O’Connor for the score – 0-4 to 0-3.
The game was levelled for the first time on 19 minutes when O’Connor won a soft free off Hargan on the 20 metre line, and the experienced forward dusted himself down to split the sticks.
Claudy regained the lead three minutes later however, when Armstrong took a pass from Marty Donaghy and, despite having his arm pulled, managed to spin around and send one over from 35 metres off the left – 0-5 to 0-4.
He followed it up with a free after Eoin McGahon claimed the kick-out and Aaron Donaghy’s initial effort was well blocked down by James O’Kane before Armstrong was fouled, and converted.
Another soft free in the Claudy defence after Fionain Smyth had initially won the turnover allowed O’Connor to take his tally to 0-4 and make it 0-6 to 0-5 on the board.
Kevin then had the ball in the net after an initial Caolan O’Connor shot came back off the post, but it was ruled out as Cassidy had blown for a free. Mark McCormick slotted it over the top and, once again, it was a level playing field.
Foreglen then took the lead for the first time in the final minute of normal time when patient play ended with McCormick fisting over the top for John Duffy in space, and he popped it over from 18 metres – issuing a cry into the ear of McGahon in celebration.
The lead lasted just 30 seconds though as Hargan was fouled at the other end and the impressive Armstrong was on target with the free from the right.
He was the man in form for Claudy, and he grabbed his fourth in added time when he latched on to a brilliant Aaron Kerrigan pass and sent it over off his weaker right foot to give the Mitchel’s the slimmest of leads at the break.

Pauric Morahan was moved into the half forward line at the start of the second-half on Blaine Carlin, with Sean O’Connor on Oran Armstrong.
A pull from Jamie Brown on the shirt of Cahir O’Connor after he beat him for pace down the right allowed Mark McCormick to level things again within two minutes of the restart.
The first manic moment came on 36 minutes when Marty Donaghy rode a heavy hit to feed Aaron, and his shot was batted down by Tiarnan Burke on the line and gathered in by John Duffy to prevent Conall White having an easy finish to the net.
The Mitchel’s edged ahead again on 41 minutes and no surprise it was off the boot of Armstrong who curled a free off the ground and just over the bar, despite the efforts of McCormick on the line – 0-9 to 0-8, but Claudy’s last.
An Eoghan Duffy score after James O’Kane won the break from a Reilly kick-out came before Hargan struck the outside of the post after a fine Claudy move that started with some excellent skill from substitute Jamie Donaghy.
Ciaran McFeely was also enjoying an influence off the bench, and he picked a pass in midfield to Kevin O’Connor who took a high tackle from McElhinney and opened his second-half account from the free after 46 minutes – 0-10 to 0-9 to Foreglen.
The O’Brien’s stretched their lead to two for the first time in the game with 12 minutes left, when Caolan O’Connor was hacked down by Hargan but managed to get it away to Kevin for the point.
The gap was three on 52 minutes when Aaron Kerrigan hesitated at one end and sent the ball wide, and from the kick-out Ciaran McFeely won the break and immediately looked for Kevin O’Connor. He found Liam O’Hara off the shoulder who chipped over the bar from ten metres – 0-12 to 0-9.
Foreglen’s dominance continued heading into added time as Eoghan Duffy found acres of space on the 13 metre line to stick it over the bar, followed by a super McCormick free from the right sideline.
It was the midfielder who got the last score of the final with another free to signal wild celebrations from the green and gold.

MAN OF THE MATCH
Eoghan Duffy – Foreglen were resilient as a team in the first-half, but in the second they came to life – and a lot of it was down to Eoghan Duffy. He was everywhere, first to the ball, powerful on the run, and scored two super points.

TURNING POINT
Changes – When both teams needed to switch it up and break the cycle, it was Foreglen’s bench that proved the difference. Ciaran McFeely entered the fray after 39 minutes and took control in midfield to assert the Foreglen dominance.

SCORE OF THE GAME
Donaghy point – It was only the one score for Marty Donaghy on the day, but it was typically brilliant. He took the ball inside his own half, ran the guts of 60 metres and then fired over on the spin, despite being under a lot of pressure.