Lynch happy to have answered the call 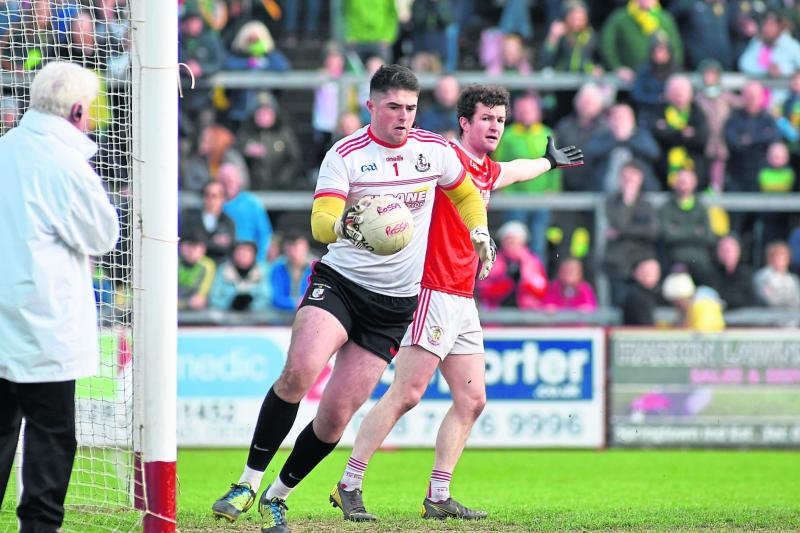 Safe hands as Odhrán Lynch carries the ball out of his defence. (Pics: Mary K Burke)

Adrian Cush’s phone call to Odhrán Lynch and the former Tyrone forward’s skills of persuasion were well worth it, to convince the 19 year-old to pull on the Rossa number one jersey.
After being recruited between the sticks by both St Mary’s Magherafelt’s MacRory team boss Kevin Brady, his father Eamon in Derry’s development squad and by former Magherafelt minor manager Anthony Campbell, it has helped shape Lynch into a championship winning goalkeeper.
“I had a big boot (kick) so they (school) stuck me in nets because I was big and I did alright there,” Lynch explained.
Campbell drafted the imposing Lynch into his minor number one jersey but when Adrian Cush arrived as senior boss, he was again in demand.
“Cush phoned me when he started with Magherafelt and I was still with the school football. We must’ve had a least a 20 minute phone-call with him saying ‘you’re doing nets’ and me saying ‘no’ but sure look where I am at now and I’m happy about it,” the imposing Magherafelt custodian utters with a smile. “I’ll take it.”
For the last two weeks, Barry Gillis worked intently with Lynch ahead of the biggest day in the clubs history for 36 years.
He kicked ball through the eye of a needle almost and made himself impassable when an Ethan Doherty goal would’ve opened a four point lead in the first-half.
As well as that, his handling was impeccable as stray, wind-assisted balls dropped in on top of him in the second-half.
How does a young player deal with pressure?
“You expect the pressure, that’s what comes from being in nets. If somebody outfield drops the ball, somebody else picks it up. If I drop the ball, it’s a goal. You saw it yourself a few games ago (against Ballinascreen). I have played in a few big games but nothing like this. In the big games, you know what to expect.”
At one point in the second-half he took off on a foray into the midfield zone. It’s impossible to clip his wings all the time.
“You play with a bit of freedom as well. I get to go on wee runs but they don’t want too many of them. You’re the 15th man and whenever everyone else is wrecked out the pitch, you are fresh and get to go.”
Lynch comes into the senior setup with a contingent of their U21 winning team and they have fitted like a glove.
There is a buzz in the camp and their celebrations, with their tops off, in a local hostelry after their win over Coleraine only galvanised them.
“They have been off ever since,” Lynch joked.
The togetherness has been fostered by the management team.
“It is a great squad to be part of,” he adds. “Cush, Baggio (James Slater), QB (Paul Quinn) and Tom (Maunsell) are very involved. They are close together.”
There is another attraction in the senior camp for Lynch. The chance to play alongside those he looked up to.
“Danny (Heavron), Chief (Darren O’Neill, Jared (Monaghan)– I grew up beside Jared and grew up watching him and that’s what you want to be, now I have the chance to play beside him.
“Joe Keenan retired four years ago, took two years out and now he is back flying fit and came on there today. It’s great to get a chance to play with the boys you looked up to.”
The Rossa ‘keeper jersey is in safe hands.