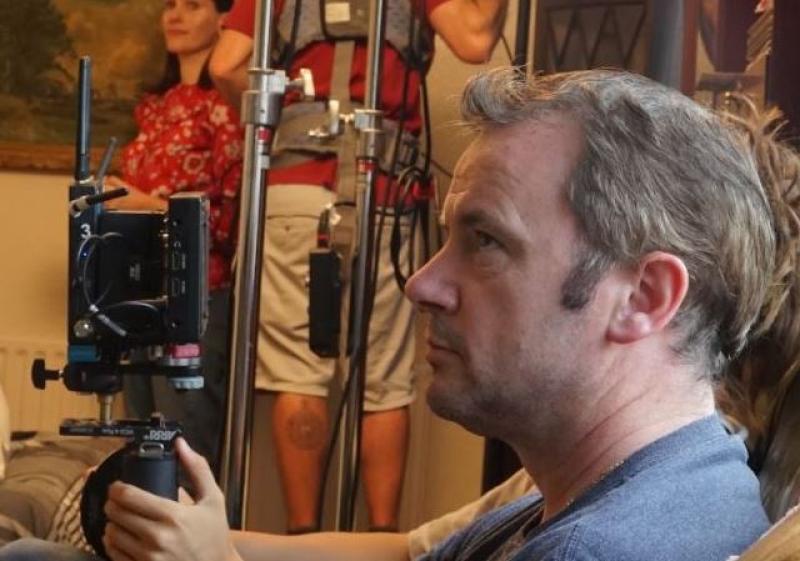 Derry film maker Danny Patrick Ogle has mixed emotions about one of his films, Maltese Connection, winning an award a the highly prestigious Cannes Film Festival – delight at being presented with the accolade but heartbroken he was unable to attend the glittering awards ceremony due to Covid-19 restrictions. Here, Danny Patrick looks back at a career that has saw him work with some of the biggest names from the big screen and talks about his return to his home town to film his latest production, Pulcinella, starring Jaime Winstone and Julian Glover.

Danny Patrick is the writer/director of the film company Empire Productions. He returned to recently to record Pulcinella, the fourth film he has shot in his home town.

Danny Patrick said: “It is based on an Italian opera (and original Punch and Judy show) and is the school play that they are putting on in the movie, however, it does mirror real life and what the characters are going through.

“The story is set in Portrush and we filmed there for all exterior scenes.  However, all interiors were shot in Derry as ease of production and knowing where we can film.

Danny Patrick said Derry was a 'great' place to film.

He said: “It is a great place with friendly people and such amazing backdrops with a mixture of history and the new following years of troubles.

“There is a lot of talent in Derry, both in front and behind the camera, so we have been able to fill out our cast and crew with locals.

“Pulcinella is the fourth film I have made in Derry, excluding reshoots on Moussaka & Chips.  Unlike other places, there are less restrictions and people are more open to help or allow filming at their places of business.”

He conceded filming during the Covid-19 restrictions was not easy.

“It was difficult, especially keeping everyone in a 'bubble' - we had risk assessments and mitigations like testing every three days and when either new cast members came to set.  There was a cost to all of that testing which we had to incorporate, but it had to be done to allow us to make the film.”

Danny Patrick said: “The story was about a brother with completely opposite goals on a collision course.  It was shot in London and it was tough as all productions are, as the things you learn can't be explained or read in a book, you have to experience them and learn from them.”

His other films include Moussaka & Chips, which starred Mike Reid, Ron Moody and Jack Wild, The Best Years with Martin Kemp in the leading role and Requiem for a Fighter, starring with Kim Kold.

Danny said Maltese Connection, filmed in Derry and Malta, was a 'semi sequel/reboot' to Moussaka & Chips.

The movie was awarded the Best Independent Film Award at the Canne Film Festival.

Danny Patrick said: “It was amazing. However, due to Covid, this was the first year since 2014 that I hadn't been in Cannes.  It was heartbreaking not being able to pick it up in person.

“It was a shock as the movie won't be released until October so I'm still trying to work out if people will like it.”

Danny Patrick is the eldest of six children of well-known Derry couple, Danny and Margaret Ogle. He recalled his first visit to a cinema. “The first movie I remember my father taking me to was Disney's The Black Hole, and it did haunt my nightmares with two images, Maximillion(The Bad Robot), killing Anthony Perkins with his blades through a book, and the final image of Dr Hans caught inside the Robot at the bottom of the Black Hole.”

The Strand Cinema was Danny's 'local' where he went to view films such as Superman 2, Back to the Future, Rocky 4 and most of the Hollywood 'blockbusters' from the 1980s.

After attending Steelstown and Slievemore primary schools, Danny attended Templemore Secondary School on Northland Road before going to Reading University which led to him setting up home in London.

He explained: “I met my best friend at Reading - we're still best friends - and moved to London as flatmates.”

So how did the film making come about?

He added: “I was always interested in performing especially at school - it was a good way of getting out of lessons.  My writing was always imaginative - supported by my English teacher, Mrs Jennifer Gormley.  I had no idea it would lead to movies.  However, I started writing shorts then moving onto features.

“Having been always interested in movies, I worked out some of the tricks they use in movies to get across information and how that impacted people and wanted to learn how to do that for my own stories.”

Danny Patrick's advice to any young person considering going into film making is: “Just go and make your movie, whether it be short or feature - take advice where you can, but never be put off.”

Despite winning an award at the Cannes Film Festival, Danny Patrick revealed his 'dream': “For me, a television series that runs four five-seven seasons. Like all shows, the first season is always cautious and limited, as no one is sure if it will work, but season two and, especially, three and four, the show is on rails - everyone knows their characters and the crew are bedded in, the only limits are your imagination.”