Connor has been conducting interviews for his local newsletter. 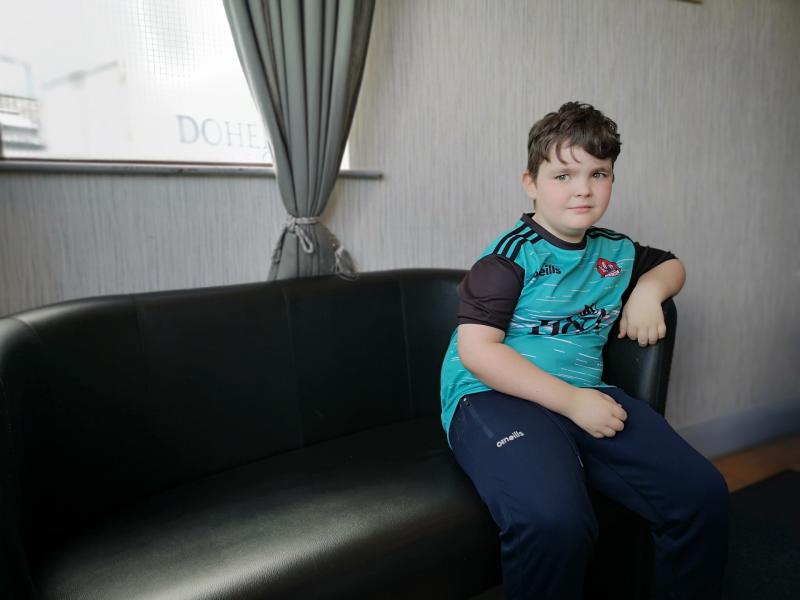 A young reporter who has taken a County Derry town by storm through his contribution to a series of community newsletters says he has the 'best job in the world'.

The Maghera Hustle was met with approval throughout the community, with Connor's interviews with local business owners catching the eye.

“I was excited to interview them,” he told the County Derry Post.

“I get random questions for random people. My favourite part would probably be meeting and talking to new people.”

Among the seven-year-old's interviewees was James Devlin, who owns Cooper's Coffee Shop in the centre of the town. Their hospitality met with Connor's approval.

“We didn't get free coffee, but we did get free buns,” he said.

“I knew him before the interview so it was quite cool to be interviewing him. I like talking to people I don't know though, because it's a whole different experience.

“My favourite person to interview was BSG Engineering, because I learned team work can make things awesome.

“I'm hoping to do some more interviews but I don't really know who yet. My mum and dad own a shop so I could interview them.” 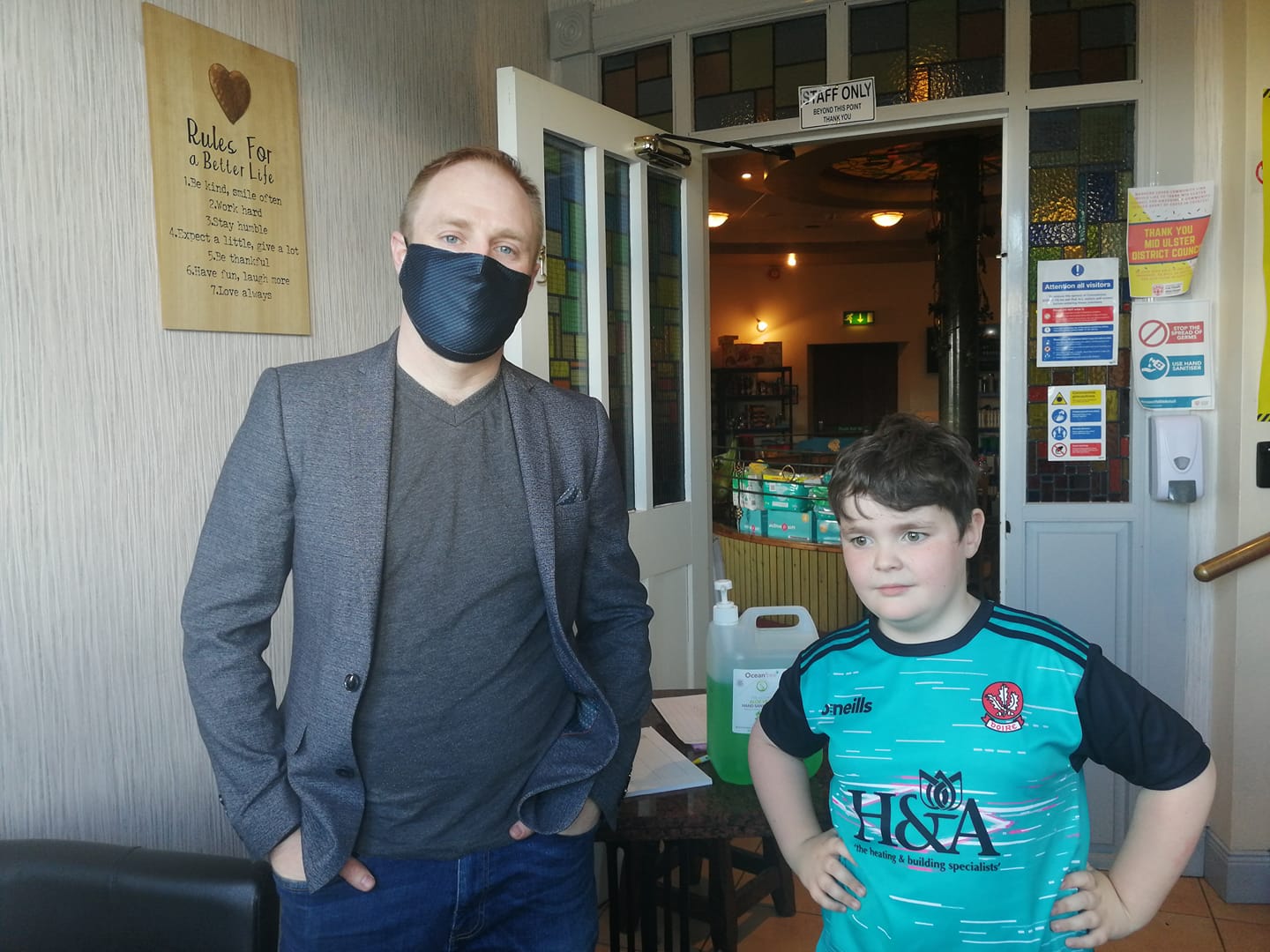 The archetypal people person, Connor is delighted to be out of lockdown and back chatting to people again.

“It [the last year] has been difficult. The hardest part was going into lockdown, staring into the distance,” he said.

“There were mountains, clouds, sky, people, there's a nice view from the house. There's a park behind the house, in our back yard, so I usually play in it.

“I'd like to see more parks in Maghera because there is only one. There is a lot of interesting stuff in the town, but I would say the most interesting thing is the people.

“In lockdown, you didn't get to meet anyone, so this is a good opportunity to meet people. I missed everything about school and talking to people.”

The project was launched by Maghera Cross Community Link (MCCL) after their work during the pandemic revealed a number of isolated members of the community.

“Older people that didn't have internet or the equipment or the want to have it, but they loved just having something to read, or the local news,” she said.

“Local news is important, especially when people are stuck in the house the whole time. They still like to know what's happening on their doorstep.

“We're not mentioned, it's not about us. Covid is never mentioned in it anywhere.” 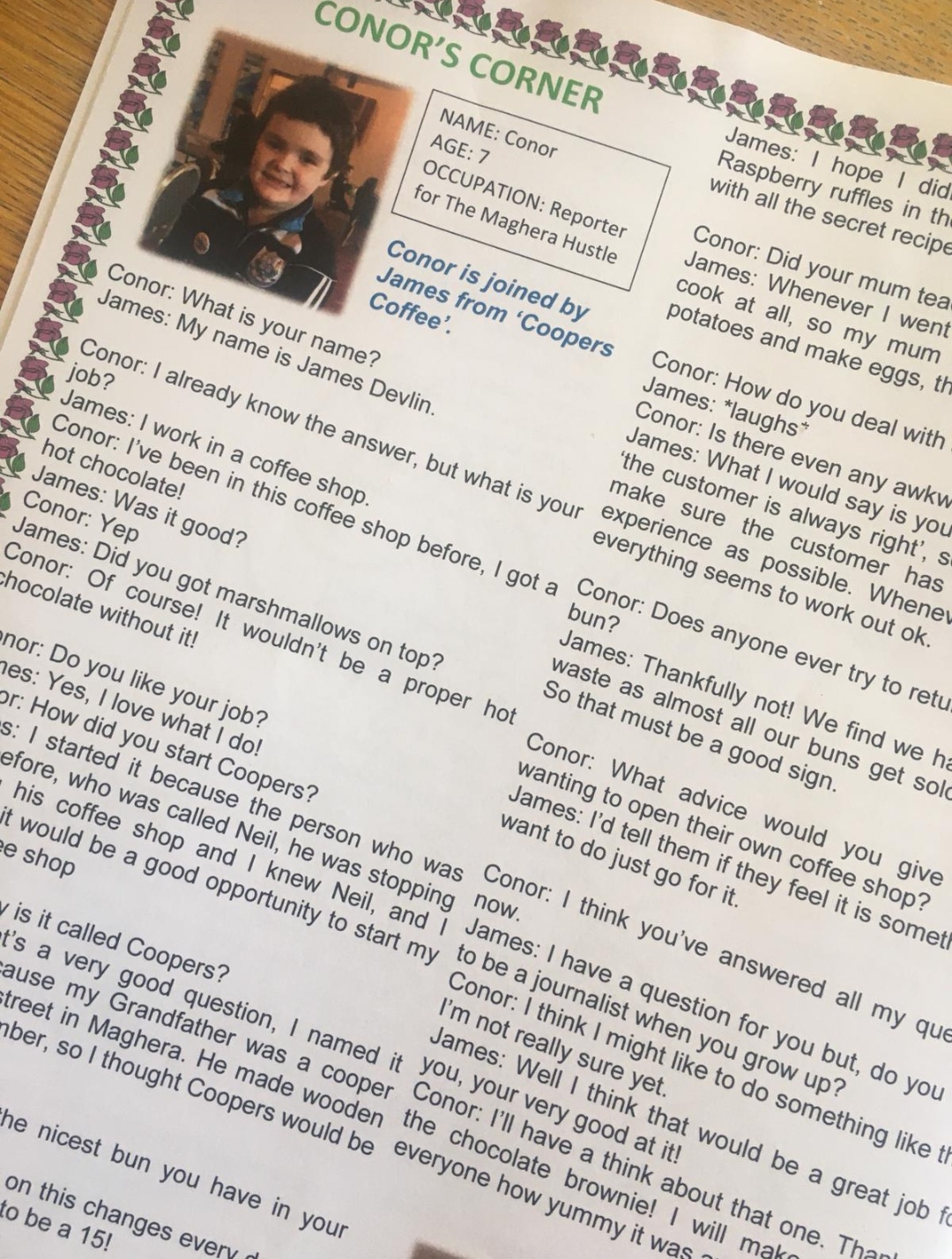 One of Connor's interviews in the Maghera Hustle.

The Maghera Hustle has tried to appeal to all different age groups, with puzzles and colouring for children and old archive photos for older readers.

It has helped the younger readers discover things happening in their town that they might never have had a chance to explore.

“The first one was BSG, a business that's been in the town for so long, but the kids didn't really know what they did, whereas now they do,” said Heather.

“It teaches them about what local businesses are doing and who runs them, but this was mostly about trying to help people that were too scared to come out of the house.

“We put them in the food bags. We were delivering food bags to Lavey, Tobermore, Upperlands, all around and we put one in each bag.

“We put some in the shops and schools, and we tried to make sure older people in the town got one through their letter boxes.

“Connor is a great character and perfect for doing the reporting.”

The young Maghera man's enthusiasm for the role is clear, and his infectious personality means he has a good chance of achieving his rather lofty ambitions.

“There are a lot of people so we have lots of plans for interviews. By age 14, I will have completed this whole country,” he said.

“I think it will be harder when I'm older, because journalists have to do a lot of stuff. I'd have to have a whole team working on it.

“It's so exciting. This is the secret; you can't get this experience if you're a normal person, but it's so fun meeting new people.

“It's the best job in the whole world.”