Derry singer Andrew Monk... have you met him yet?

One of the most sought-after entertainers in the north west, has a career which many would look on with pride. 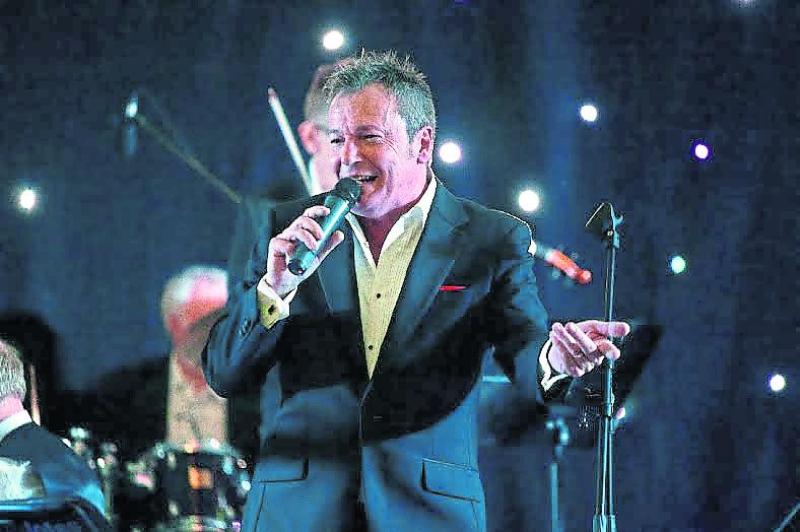 Andrew performing with his group, The Bleu Note Big Band, in the City Hotel, Derry.

Andrew Monk – one of the most sought-after enter- tainers in the north west – has a career which many would look on with pride.

The Derry singer has learned his trade with the best in the business with a number of television appearances on his CV.

Here, he looks back over his career inspired by the music of an international Grammy Award winner and how he has been performing through the pain barrier for a number of years.

Today, like all musicians, Andrew is unable to take to the stage due to the Covid-19 restrictions, but that hasn't stopped him doing what he loves most – he recently teamed up with composer Eamonn Karran, also from Derry, to write, compose and record their song, 'A Last Goodbye,' in his home studio.

Andrew was born in Glasgow, Scotland, where his father, Micheal, was stationed with the Navy as a radio technician.

As a family, Andrew, his mother and older brother, Kevin, moved often due to his father being posted to various bases in different parts of England and overseas in Singapore, where he first started primary school at the age of three.

Andrew said: “We lived in Singapore for about five years and then moved to Derry when my dad requested a transfer as my mum was from here. She was born and grew up in Ardmore, Waterside and her maiden name was Jean Doherty.

“I started the Waterside Primary School with Kevin when I was eight years of age. He was 18 months older than me and he later went on to St Columb's College and I went to St Brecan's Secondary School.

“Thirteen years later, my sister, Karen, was born which was to be a great surprise to my parents as my mother was now in her late 40s. 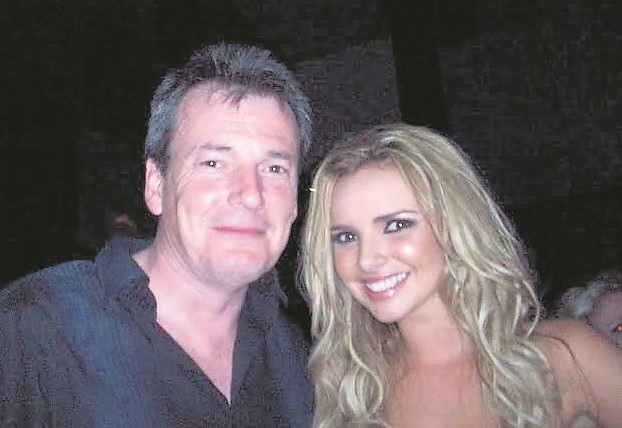 Andrew with former Girls Aloud singer, Nadine Coyle, who he and his wife babysat when she was young.

“We were always surrounded with music in our younger days as my father, who passed away on St Patrick's Day 2008, often played his collection of Tom Jones, Engelbert Humperdinck and Jim Reeves collections on the radio gramophone - TV had yet to be a thing in our house.

“As a radio technician my dad had served 17 years in the Navy and when his term was up, he decided to open his first shop in Spencer Road in the Waterside area of Derry selling, televisions and maintaining them.”

APPEALING
With Top of the Pops being a weekly treat on TV in those days along with The Old Grey Whistle Test, music was becoming more appealing to Andrew as his brother, so they decided to enter their first singing competition on the television show hugely popular at the time, Tea Time With Tommy.

“When we got the news that we were successful and going to be on TV we decided to learn the guitar with the dream of being on Top Of The Pops one day,” Andrew said.

He added: “This was our start in the music game and myself, at the age of 12, and my brother, at the age of 14, became known as The Monk Brothers performing in school shows, community centres, church halls and then our first paid gig in the old Masonic Hall in Derry. My dad was our manager then.”

An appearance on the TV talent show 'Opportunity Knocks,' a forerunner to the X-Factor, hosted by Hughie Green, followed which led to the brothers taking up singing lessons alongside Eurovision Song Contest winner, Dana, with the Tony Johnston School of Music and then with vocalist teacher, Neil Carlin, from Lawrence Hill.

It wasn't long until the duo formed their first band. 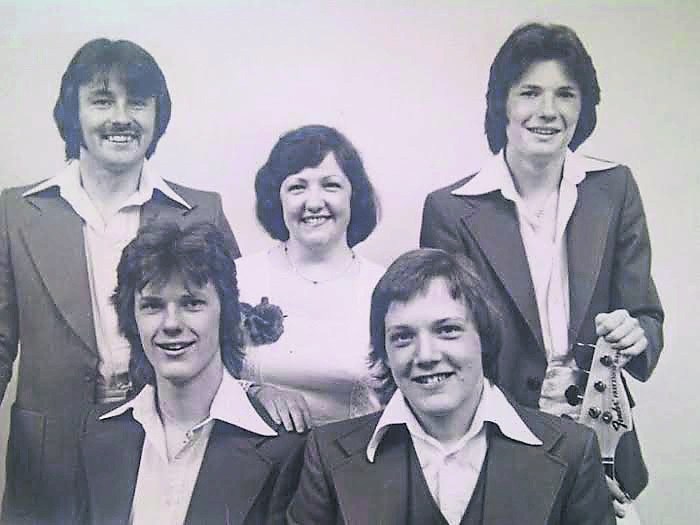 Andrew (back right) and his brother, Kevin (front left) with their 1970s band, Mint Rock. Included are Tony Gormley (back left), Linda Gormley (back middle) and Brian Stewart (front right).

Andrew recalled: “By this time we were now in our early teens and we started our first band named Mint Rock with our first drummer and new guitarist.

“We later progressed to other bands with female singers which would appeal to the boys in the audience called the Stardust Showband, The Honey Bunch and, finally, Kandy.

“We had a number of talented female singers fronting the bands over the years such as Linda Gormley, Patricia Gormley, Maureen Campbell and Siobhan Murphy to name but a few.”

However, with 'The Troubles' intensifying in the late 1970s and with the band performing all over Ireland, Andrew decided it was time for a career change.

He explained: “I left the music scene behind to further a career change in England, training as a satellite technician.”

After a number of years away, Andrew returned to Derry in 1983 when he met his now wife, Laura, the eldest daughter of the famous Johnny Quigley.

“A few years past and we were due our first child and our son, Paul, was born. By now, I I was in my early 20s and was asked to stand in one night on guitar and vocals with Johnny for his weekly gig at The Drunken Duck bar in Shrove in Inishowen.

“After this, Johnny's eldest son, Joe, needed a sound technician for his big band, Nightheat, that played in the Squires Nightclub in Derry every Monday night.”

It would not be long before Andrew would be back on stage himself.

He recalled: “With all this music back in my life once more and the new experiences of the sound of live brass, I got the urge to perform again. I was asked by a number of hotels if I would be interested in weekend performences which was welcomed financially as our second child was on the way.

“Soon my first daughter, Sarah, was born. At this time, I had already set up my own business installing satellite and TV aerial systems during the day. Not long after this my third child, Kirsty, was born.

“I now wanted my own band inspired by the music of Michael Bublé and started taking my own bookings for weddings, corporate events and festivals etc and The Bleu Note Big Band was born.”

But there was one thing Andrew had yet to achieve – that was his own recording of an album – this was all to change when he met up with local musician, Leo Fitzpatrick, who had his own recording studio in his home.

Andrew added: “I recorded my first EP of cover songs. I later met up with Phil Coulter and got permission to record his song 'Remember Me' which I did in 2006 for the EP 'A Fine Romance' it just grew from there until now.”

FULL TIME
Despite years in the business, Andrew revealed he only went full-time a short time ago.

“I went full time in the music business only three years ago when I damaged my neck from the odd slip off ladders and knee pain etc.

“I've been on the surgery list now for over four years for a titanium disc to be inserted into my spine at the neck area but with this awful Covid pandemic in place, who knows when it will happen.”

During the lockdown, as well as the release of 'A Last Goodbye,' Andrew joined up with other local musicians to entertain the people of Derry and beyond for live streams raising funds for the local Foyle Food Bank charity.

“This was the brainchild of my good friend, Leo Fitzpatrick. He posted a Facebook page for people to log onto to be entertained during lockdown and named the page The Magnificent Seven Crew which has raised thousands so far for the charity the Food Bank.”

Andrew hopes live music will return 'very soon' but fears there will be casualities in the entertainment business.

He said: “Unfortunately, I think there will be venues closing permanently after the impact Covid-19 has caused to Derry's entertainment business.

“It would be nice to see Derry folk support the local musicians by streaming and downloading their music especially as these local musicians perform nightly to entertain the public in these uncertain times. Roll on 2021!”