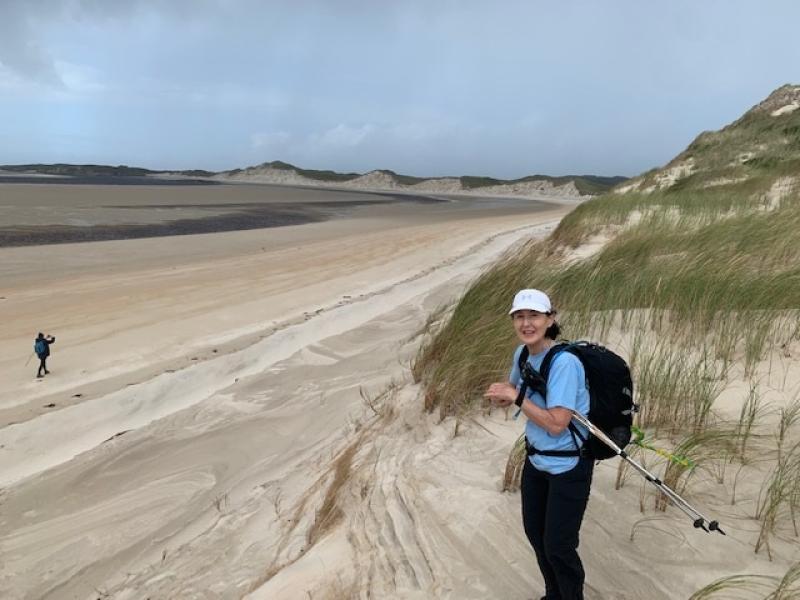 Peggy enjoying some of the wonderful 'Camino' sites of Donegal

For many years Peggy Stringer has walked parts of the Camino in Spain (The trail of St James).

With the lockdown not allowing her to go to Spain, Peggy decided to do her own Camino in her own County of Donegal and her great ambition was that she would raise a substantial amount of money for Cancer Care West and the Donegal branch in particular.

Peggy was born in Carndonagh in Donegal and has developed a very successful skin care business in Dublin.

Peggy is vice president of the Donegal Association.  She is a lifetime member and a strong supporter of the Association and all that it does for Donegal people everywhere.

At the end of August this year, Peggy set out on her Donegal Camino starting out in her beloved Inishowen.

She was joined by a few friends at the most northerly point of Ireland at Malin to eventually finish at the highest cliffs of Europe at Sliabh League.

Peggy made her way from Banba’s Crown Malin Head for the special journey of 160 Km to her final destination.

Day one allowed her to see the beauty of her home area taking in the beautiful beaches of Inishowen and in particular the lovely five fingers beach.  She made her way over the Urris hills in Clonmany and into Fanad over Knockalla and Portsalon to Fanad Lighthouse following along the Wild Atlantic Way and the Rossguill Peninsula and onto Ards Forest Park.

Heading up Errigal is a challenge any day but Peggy, having been walking for a number of days was heading up on windy and a wet September day which was some challenge and achievement to have completed.

Day seven saw Peggy in Ardara for the penultimate challenge a 12km walk on the Sheskinmore Nature Reserve between Sandfield and Rosbeg and what amazing scenes of beauty untouched natural scenery which was something special for all on the walk that day.

Peggy had the joy of staying in Ardara for the last number of days and enjoyed the delights of the good food served up by the various restaurants.

The final day of Peggys Donegal Camino was to Sliabh League.

Local and popular hill climber and tour guide Kevin Maguire led Peggy and her friends into the mountains of Glencolmcille starting at the top of Sliabh League and finishing some 5 hours later down the Pilgrims Path to the Rusty Mackerel.

Peggy and friends had the privilege of visiting the Sliabh League Distillery at Carrick and James & Moira Doherty kindly showed all around and donated some of their special Dulaman Gin products towards the cause.

On Saturday night after the trek along Sliabh League, Peggy was joined by friends and members of the Donegal Association and the people of Ardara for a lovely meal in the Nesbitt Arms Hotel.

Peggy was duly thanked for what she had done this week for Cancer Care West Letterkenny branch.

Peggy is a determined lady when she says she is going to do something she surely does it.  What she did this past week raising over €5000 for Cancer most certainly make Peggy Stringer a Hero.

Anyone can still donate on www.idonate.ie/PeggyStringer.