The history of Derry Credit Union: The story behind the creation of a 'bank with a heart'

In this fourth article on the founding, growth and impact of Derry Credit Union as it celebrates its 60th anniversary, we reflect on the 1990s 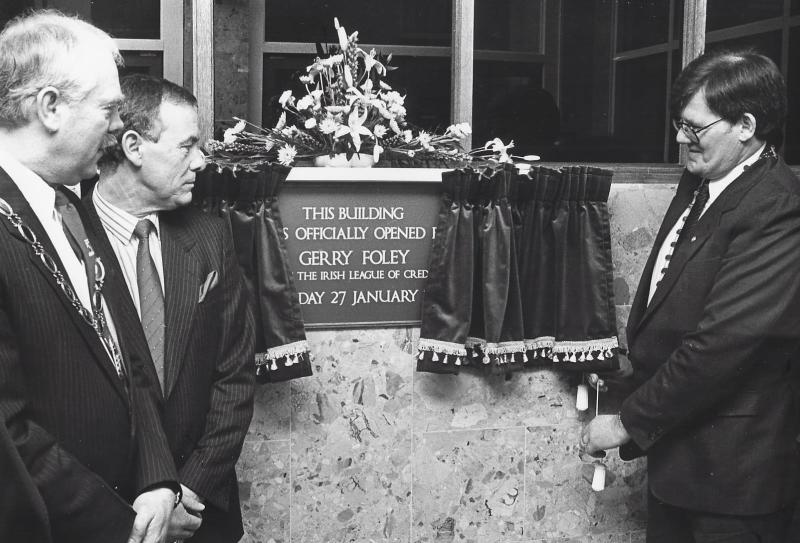 Members continued to answer the call to save ‘a little extra’ to help fund the new building, technological advances translated into new IT equipment and services, and credit unions continued to work together locally, nationally and internationally to meet the needs of their members.

The decade was launched on a celebratory note when the official opening of the long-awaited new building on Abbey Street took place in 1990.

The new building was funded entirely by the members.

At that year’s AGM, then President Leo Simpson said: “The fact that Derry Credit Union was able to build this magnificent office accommodation out of its own funds and still service all the borrowing requirements of its members are achievements of which we can be justly proud. At the Annual General Meeting of 1987 you, the members, were asked to make a very special effort to increase your savings and the response was overwhelming. During the last two years savings have increased by over £2 million.”

The new, larger building was the site of several visits by distinguished guests, including Neil Kinnock, former leader of the British Labour Party and European Commissioner, and former An Taoiseach Bertie Ahern. 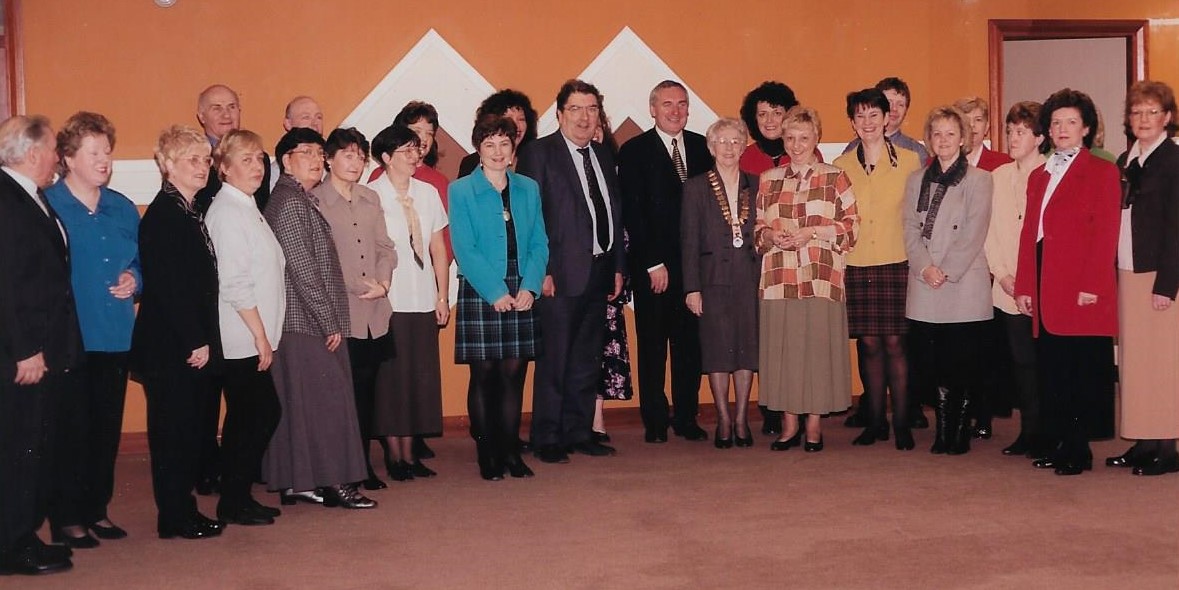 Former director Seamus McAnee recollected that both leaders expressed their “utter amazement at the size and quality of the building and the services offered to members”.

One of the Ten Operating Principles of Credit Unions is ‘cooperation amongst cooperatives,’ a principle clearly demonstrated throughout the decade when Derry Credit Union, one of the largest credit unions in Ireland in terms of membership and assets, assisted other credit unions by seconding experienced staff to them and extending lines of credit to help them through brief challenging periods.

By working together and supporting one another, the movement was strengthened locally and increased the confidence of members.

This confidence was amply reinforced when two severe recessions, one in the 1980s and one in the 2000s, caused barely a ripple for credit unions at a time when other financial institutions relied on tax-payer and government bail-outs.

One of the reasons credit unions weathered these storms when the ‘big players’ could not is the fact that credit unions invest in their members.

Credit Union members understand this and have placed their trust in the movement from its earliest days.

Discussion and debate were key aspects of board meetings, as a cursory look through the archive of minutes reveals.

But alongside this, a healthy respect for one another and an overarching focus on the membership meant that the board provided solid leadership, characterised by integrity and honesty.

A strong board consisting of volunteer directors from a mix of backgrounds and possessing a range of skills and experience contributed to the success and sustainability of the credit union.

As Seamus McAnee summed up: “Their success has always been based on doing what is in the best interests of the members”.

A number of large figures loomed during the 1990s.

And while General Manager Sean Drummond oversaw the day-to-day management of the credit union for most of the decade, he was succeeded by current General Manager Joan Gallagher in 1998.

The third General Manager of Derry Credit Union (succeeding Jack McDaid and Sean Drummond), Joan introduced a fresh, modern perspective and approach, and an enthusiasm fitting for the new millennium.

“I was appointed in November, 1998, to work alongside Sean until his retirement in July, 1999. It was a challenging period being a new manager, my youngest daughter Áine was born in June of that year and, at the same time, I was tasked with automating and expanding our services to the members, updating the operational systems and controls, and ensuring that Derry Credit Union continued to be recognised as a key driver in the credit union movement locally, nationally, and internationally.

“Change can be difficult but the transition from Sean’s period of management to mine was smooth. I was supported by a very able and welcoming team of staff and volunteers who knew our members and their families well. In particular, Isobel McAdams and Marie Harley kept me right through those early days. Their knowledge and absolute belief in the ethos and principles of the credit union were breath-taking. It was a privilege to be joining one of the most prestigious and important organisations in the city.”

A number of milestones were reached during the decade.

Membership grew. By 1992, Derry Credit Union had reached the Registrar of Credit Unions’ membership threshold of 15,000 and had a waiting list of 500 new member applicants. 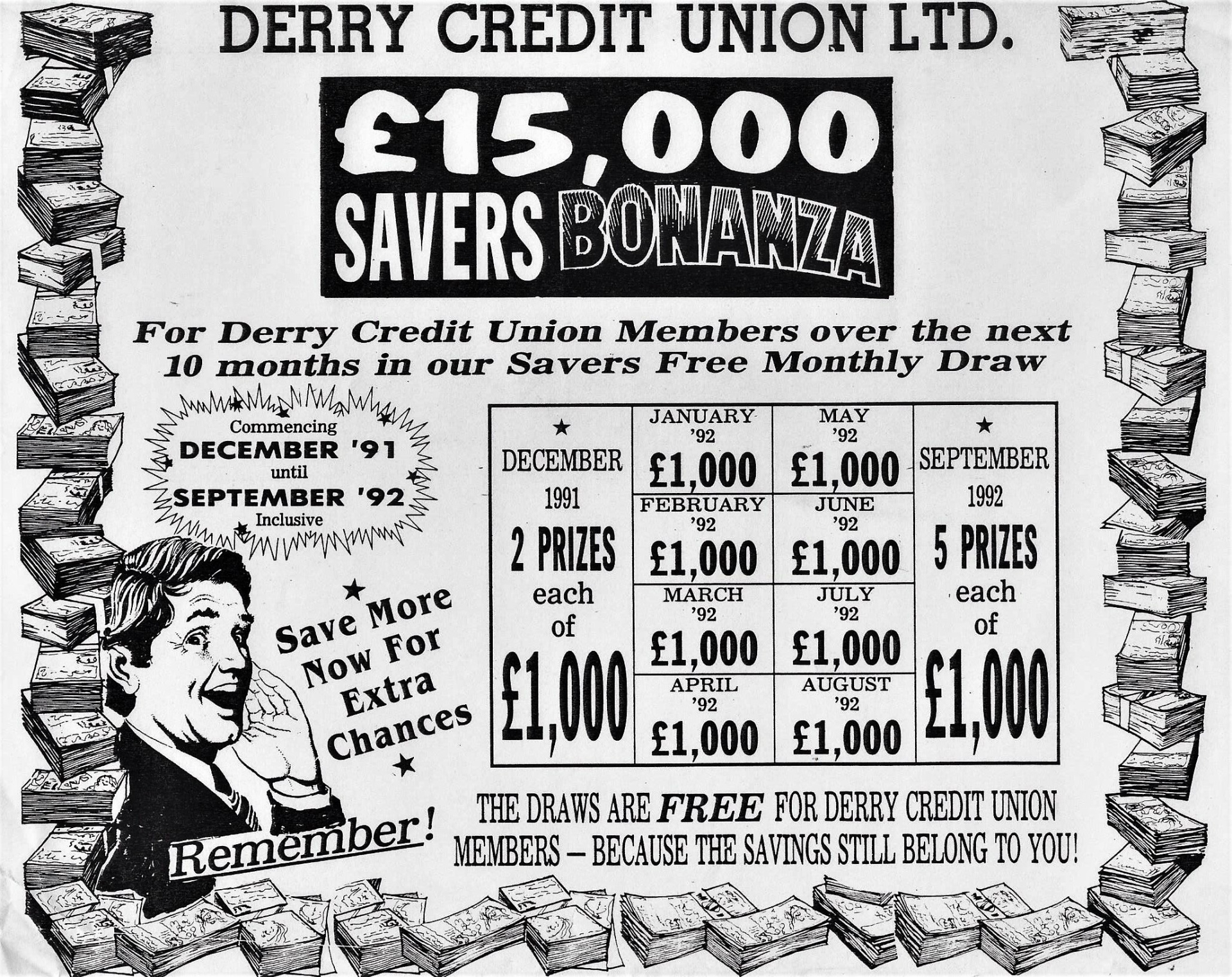 Derry Credit Union had reached this number by 1997.

The third increase in the decade came in 1998 when the maximum permitted membership was raised to 25,000.

This rise in popularity of credit union membership was reflected in the Irish League of Credit Unions’ 1995 survey which revealed that 28% of the population in Derry belonged to a credit union, when the average NI figure was just 12%.

Other changes implemented during the course of the decade included expanding the immediate loan service for eligible members (1993), concluding the credit union’s contract with Northern Bank and tendering for new banking services (Bank of Ireland submitted the successful tender and a five-year contract was signed in 1995), the introduction of new printers and passbooks (1999), and initiating a strategic planning process to plan for future growth and direction (1999).

A key factor in Derry Credit Union’s success has been its staff.

In 1998, Vice President John O’Connor said: “Derry Credit Union is not a major employer but it is a significant one in that it is a community movement which now provides 18 full-time and 15 part-time pensionable jobs which are secure and sustainable without government funding.

"This in itself has been one of our major achievements over the 38 years of our existence and we value our role as a provider of employment whilst ensuring that members get the benefit of an efficiently run office”.

Several staff from that time are still serving the same members today.

One of these, Catriona Harkin, joined the staff in her mid-twenties.

She fondly remembers Sadie McCay, one of the more experienced tellers, predicting: “You will get settled and you’ll be here in thirty years. This is a great job to work around your children.”

Sadie trained Catriona how to count and fold her notes into £100 bundles – a technique that became synonymous with the credit union.

As the decade neared its end, Ireland’s economy was improving though the people of Derry had yet to benefit.

As Vice-President John O’Connor explained in the 1998 annual report: “The benefits of the ‘Celtic tiger’ economy which has seen the Republic of Ireland set to become the third richest country in the European Union by 2001, are often not felt by the regions most distant from Dublin. Indeed, many of our members have lost their jobs during the past year so the prospect of a poorer Christmas is on the horizon for them. The Credit Union, however, will not abandon its members whose circumstances have changed for the worse, but will continue to assist families during this and any other time of the year. I would impress on all members who find themselves in difficulty in meeting their commitments to contact the office where they can be assured of a sympathetic hearing.”

These words are particularly relevant today in 2020, given the financial challenges members could potentially face in the wake of the COVID-19 pandemic and Brexit.

However, the decade ended on a high note when founder member John Hume received the Nobel Peace Prize on December 10, 1998.

While the world paid tribute to John’s tireless work to achieve peace in Ireland and address the roots of poverty and conflict throughout the world, we in Derry paid tribute to the role he played in the credit union movement.

Not only was John one of the six founder members of Derry Credit Union, he was also the youngest president of the Irish League of Credit Unions, a position to which he was first elected at age 27 and held from 1964 to 1968.

The Irish League of Credit Unions subsequently inducted John into the Credit Union Roll of Honour in 1999, and honoured him as their first ‘Director for Life’ of the ILCU Board.

In 1999, Derry Credit Union also paid tribute to John when, on behalf of the members, the board presented him with a specially commissioned silver replica of the Broighter Boat, the type St Colmcille sailed when spreading Christianity and peace to Scotland.

An advocate through and through of the credit union, John remarked to Sunday Times journalist Peter Millar in 1999, that, despite all the accolades and honorary degrees he received in his lifetime, he would like to be remembered 'for my contribution to the credit union movement', for 'no organisation has contributed more to the economy of this country and it's about time more of this was said and the movement got the credit'.