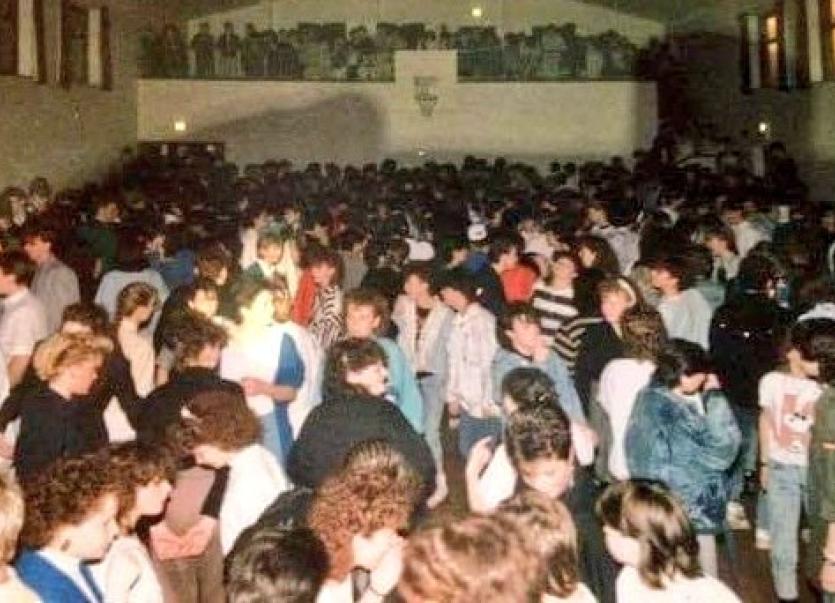 The pitch where the King of the Gorillas would issue his rallying cry.

The first rule of Fight Club is that no one talks about Fight Club. Until now. Liam Tunney talks to an ex-member of the infamous Gorilla Gang, who were responsible for many a headache at Slaughtneil disco.

The Slaughtneil GAC committee used to meet every Monday evening. The meeting was supposed to be a general meeting about club business, but usually got bogged down with the disco.

Discussions often revolved around two groups of boisterous young men in particular – the Gorilla Gang from Draperstown and the Banana Gang of Bellaghy.

The latter were set up in reaction to the former, whose name was notorious around south Derry throughout the 1980s.

“The name was actually originally meant to be ‘Guerrilla Gang’,” an ex-member told the County Derry Post.

“About 1979 or 1980, things were getting hot and heavy and the likes of Ballinascreen was getting saturated by the British Army.

“There would have been fighting with the UDR or the Brits, and if they came into Draperstown, the Gorilla Gang would have gathered up a posse and put them out.

“There were two or three gangs in Draperstown at that time. One of them was the Wombles and the other one was the Sixtown Clowns.

“They all used to fight amongst each other at small discos that used to be on round Draperstown before Slaughtneil started.

“The police knew about the Gorilla Gang. I had a few older brothers that went to Spain, and on their way home they were pulled in at London airport and quizzed about the gang!”

As the disco’s popularity began to grow, the three gangs soon set their grievances aside as the possibility of taking their local scuffles to a wider field presented itself.

“The disco took in the whole of south Derry, so there was more boys to fight with outside your own town,” he recalled.

“It was just like that at those times around dance halls. In the early 80s, before Slaughtneil, the older Gorilla Gang would all have been over in Dungiven fighting at the Castle.

“There were a wile lot of boys in the Gorilla Gang that were mad for fighting, and then everyone started making up their own gangs to fight us.

“I think that’s where the Banana Gang came out of, that they were going to get the Gorilla Gang at Slaughtneil.

“I think the Banana Gang gave the Wombles and the Sixtown Clowns a bad beating one night and then they didn’t want to go anymore.

“Well, they were mad to go, but they couldn’t because they were scared of the Banana Gang. They came to the Gorilla Gang and asked if they could join up.”

The merger prompted a rivalry that lasted throughout the late 90s and caused the Slaughtneil bouncers no end of trouble.

Our ex-member feels that the gangs’ propensity for bravado and fisticuffs helped boost the crowds that flocked to the hall on a Friday night.

“Four carloads of us would leave the town to go down to Slaughtneil. We didn’t chance taking the bus, because if you were fighting, the bus driver wouldn’t let you on,” he said.

“I remember going down to Slaughtneil and being told these Banana Gang boys were gonna be there, and two nights in a row, we went down, and they weren’t there.

“The third night we went down, we thought they weren’t turning up, so maybe only five or ten of us went and we got some beating from the Banana Gang that night – they all turned up!

“God help them bouncers. I don’t think Slaughtneil would have been Slaughtneil without it. Everybody was going, girls and all, to see what was going to happen next week.

“If there was a small scuffle in the car park, threats were made about who was going to be there next week that wasn’t there tonight. 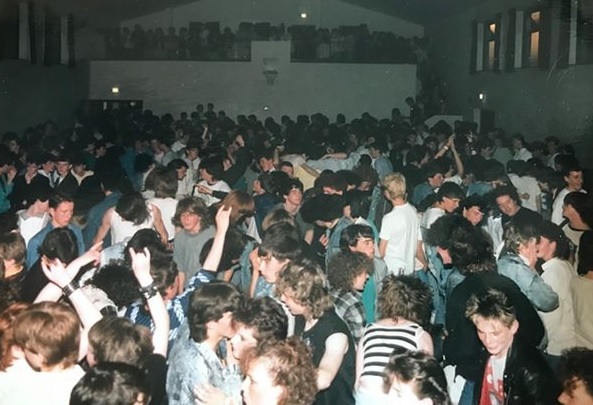 Shiny, who ‘couldn’t beat eggs’ but drove the getaway car. The King, who would run out onto the pitch and shout, ‘I’m the King of the Gorillas and I eat bananas for breakfast’ before a dust-up.

Johnny the Donkey, who played the role of negotiator when the gangs were thrown out of the car park and arranged to meet halfway between Draperstown and Bellaghy to finish it off.

An eclectic mix, but one name resonated more than others.

“Flathead was the feared name. He was a real tight boy, he would have fought anybody man to man,” he said.

“We would have said, ‘you boys will be in trouble next week, we’re taking big Flathead with us’, and everybody would have been at Slaughtneil the next week for the big punch up outside!

“Even the bouncers were a wee bit scared of big Flathead because he was big for his age. There were some characters about.”

While the rivalry between the two gangs was intense, it never created any lasting grudges and the member recalled how, by chance, he encountered one of his nemeses years later.

“I hadn’t seen this boy for years, until I was going along one day in the car through Rocktown and heading for Bellaghy,” he said.

“I saw a man walking along the road in the pouring rain and I stopped to see if he wanted a lift.

“He hopped in anyway and was talking away to me and when he was getting out of the car, whatever way he turned sideways I recognised him. He caught on then to who I was too.

“We were good friends at school, but then he was in the Banana Gang and I didn’t really want to let him know that I wanted to kill him, and he didn’t want to let me know either!”

Time and people move on. The exploits of the Gorilla Gang may seem shocking when viewed through a 21st century lens, but our ex-member says it was a different era.

“When I look back, I never knew of a man being hurt badly. When I hear the gang mentioned, it makes me laugh,” he said.

“There were no mobile phones, no fancy cars. Anybody that had a car, it had cost them maybe £500. That whole thing is just lost.

“I know it wasn’t good going to all them dance halls and fighting, but at the same time, no one was doing drugs or anything, it was just a punch-up.

“Just a locka lads with a few beers in them, that fell out with another group of lads and there were a load of myths and legends that never even happened.

“There were a few nights when I was younger that I maybe woke up in the morning with a black eye and a cut forehead and I said to myself, ‘oh my God, what am I at?’, but apart from that, I’ve no regrets.

“We were all young cubs. Apart from the odd bleeding mouth and a bust lip, there wasn’t much harm done.”

“God help them bouncers, those men got some torturing! Them boys did some organising to keep that all going.

“For a club on top of a mountain, they did well to actually get people to get up there. There’s not even a pub.”

It’s unlikely south Derry will ever see the likes of the Gorilla Gang again, but their mention invokes howls of recognition and intrigue.

With a chuckle no doubt brought on by the memory of discos past, the ex-member had one idea that might have some under lockdown pining for its end.

“I couldn’t say that I’ve any enemies out of it, put it like that. If we could get a Banana Gang-Gorilla Gang reunion night gathered up, I’d say we could have a good laugh!”

If you build it, they will come: Slaughtneil's field of dreamers

Spinning the soundtrack to a timeless era

The goose that laid the golden egg

The night a TV star came to Slaughtneil