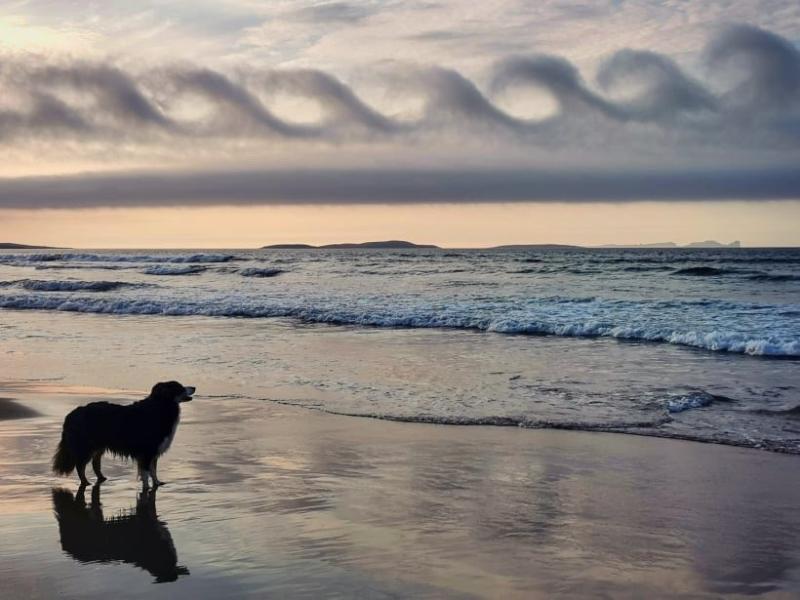 A photography enthusiast and his dog are certainly doing their bit for Donegal tourism during the Covid-19 lockdown.

James O’Donnell frequently takes photos of his beloved dog ‘Iggy’ in some of the most spectacular locations around the county.

And she is now becoming a bit of a celebrity with thousands of people all over the world going online to see the Border Collie with stunning Donegal backdrops behind her.

In one week recently, Iggy-related photos reached over a quarter of a million people on facebook.

Falcarragh-based James has been building up a collection of photos with nine-year-old Iggy, and his work has attracted a lot of attention.

Indeed, in March, he had been scheduled to go to America for a number of exhibitions, starting in Florida. But the onset of Covid-19 meant the flights had to be cancelled.

Nevertheless, he is hoping to go to New York later in the summer for another exhibition and possibly also to Connecticut.

His talent is such that his work has attracted the attention of highly regarded veteran Magnum Photos member Elliott Erwitt (whose collection included photographs of Marilyn Monroe) and Samuel Holmes (former Magnum Photos librarian), and through them steps were put in place for the planned exhibitions.

The fact that they have been in contact highlights just what an impact James is making.

After World War II, a number of photographers banded together to form Magnum Photos, an organisation dedicated to chronicling world events - and named for the magnum-sized bottle of wine that they drank at each meeting!

The process of becoming a full member of Magnum Photos takes a minimum of four years. Photographers are only considered once a year, during Magnum's Annual General Meeting in June, where one day is set aside for considering and voting on potential new members' portfolios. It is highly prestigious.

“I love promoting Donegal,” James said, pointing out that he actually takes all his photos on his mobile phone!

James lived in London for many years, before returning home to Donegal, and he adores the outside world and doing his bit to showcase and promote the county in any way that he can.

Last year he produced a calendar called “Iggy’s Donegal” - filled with fine pictures from ramblings and hikes around Donegal - and it proved to be very popular.

Best tweeted the photo and commented that it was a “great example”  of “an extremely rare phenomenon” known as Kelvin-Helmholtz clouds.

The stunning image (pictured at the top of this page) of the cloud formation was taken from the Back Strand in Falcarragh, and needless to say, also featured Iggy.

All the indications are that Iggy is on the way to being a great ambassador for Donegal, and while this will be a terribly difficult year for those in the tourism sector here, at least James and Iggy are publicising to the world some of the great sights to see.

The story made the front page of this week’s Donegal Post newspaper and is featured in this Thursday’s Donegal Democrat (May 7, 2020).