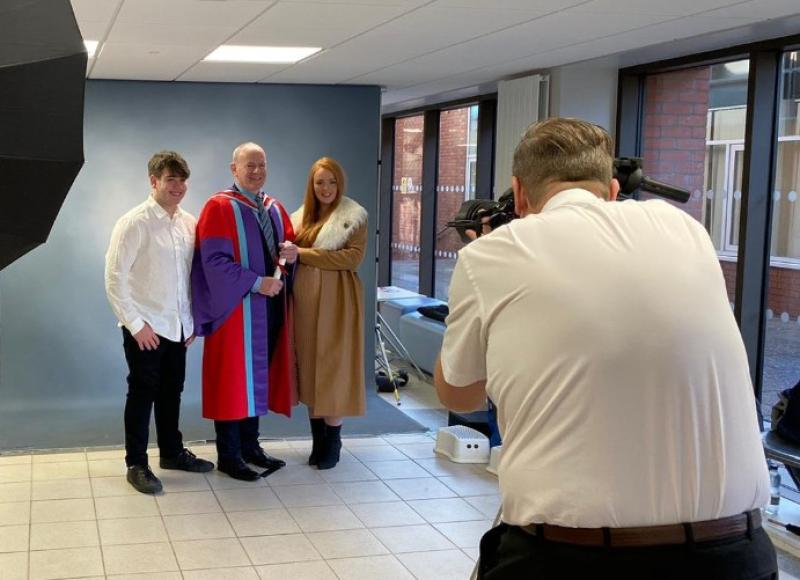 Maurice pictured with his son Thomas and daughter Hannah

A Creggan man who left school with one O Level has been awarded the highest university degree for intensive research in the field of domestic violence.
Maurice Mahon was brought up in Rathkeele Way, Creggan. He attended St. Peters from 73 -78 and left with one O Level in English.
This week he was awarded a PhD for a thesis assessing the readiness of domestically violent men to engage in domestic violence rehabilitation programmes.
In the midst of the Troubles it was a difficult time for young people to focus on their studies.
Maurice said: “For me, leaving school with one O Level and thinking I was stupid, to get into such a prestigious course and successfully completing it is a proud moment.”
The Derry man is proof that life is about learning as despite leaving school with few qualifications he immersed himself in study and has used it to help others through decades of social and community work.
After spending some time on the dole, at 19-years-old Maurice began voluntary work as a youth worker and enrolled in an Addiction Studies course at Ulster University Magee.
This coincided with work at Northlands Addiction Treatment Centre. Maurice believes alcohol was, and still is, the single biggest issue facing Derry. “The problem is that people don’t even view it as a drug, but it’s more powerful than most and one of the few drugs that actually damages the body just by taking it.”
The heavy/binge drinking culture that exists in Ireland is the source of many social ills, he said. “The main reason children are taken into care, neglect, is often down to parents having a drink problem.”

In January 1987 he moved to London to work in a residential alcohol treatment project where he attained a diploma in alcohol counselling at the University of Kent. The following year he got a job as manager at the alcohol treatment centre, a post he held for four years.
When planning to return to live in Derry he believed that with a social work qualification he could secure a steady job and therefore applied for the professional social work training course at the University of Ulster.
“The best thing about it was that it gave me an academic qualification and also a professional qualification which would allow me to be employed.
“I graduated in 1995 and started working right away with the Foyle Health and Social Services Trust in the Leaving and After Care Team, supporting young people who are leaving care and preparing to live independently in the community.”
In 1995 he, and local community worker, Frankie McMenamin, established the local charity, Zest, an organisation providing supportive care and counselling to young people struggling with suicidal ideation and self-harm. Maurice managed Zest for 5 years before leaving to pursue other interests.
At the turn of the millennium until 2010 he was part of the first Drug Arrest Referral scheme in Northern Ireland. The scheme was managed by the Western Health and Social Care Trust (WHSCT) Alcohol and Dug Service and required daily attendance at the Strand Road Police Station. It was an innovative project through which all persons detained at the police station were offered support to address alcohol and drug problems. 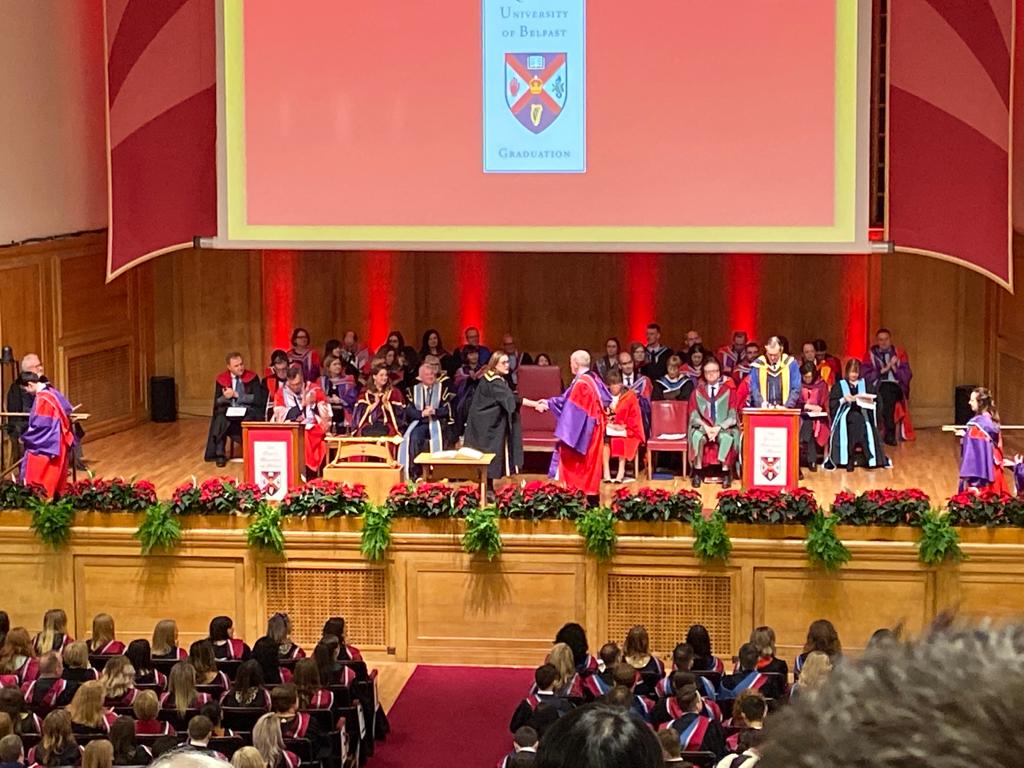 In 2010 he was grant aided by the Public Health Agency to undertake a fellowship at Queens University Belfast.
His PhD involved “assessing the readiness of domestically violent men to engage in domestic violence rehabilitation programmes” in Northern Ireland.
“A lot of men drop out of these rehabilitation programmes and what research has found is that when these men drop out they actually present as a greater risk to victims compared to if they had never been referred.
“Amongst other things, the research established the men who completed the programme stopped drinking before or at the start of the programme, whereas the men who dropped out of the programme had continued to drink alcohol.
“Because of the way alcohol affects the brain, if you’re not drinking you’re far more alert and your brain can make connections and you can develop insight to understand yourself.
“But if you’re drinking during the week then it slows the brain’s ability to make sense of things.”
He is now working to rehabilitate men who have been domestically violent. “We know prison doesn’t work and most of the men never receive the help that they need,” Maurice said.

When he returned to the WHSCT from his secondment at Queens University Belfast, Maurice began working as part of the Domestic Violence Team. Here he set up the first group-based and individualised domestic violence treatment programmes run by the WHSCT.
The demands entailed in establishing the new programme meant that it took longer than initially anticipated to finish the PhD.
However, this year he successfully completed the PhD which is the culmination of eight and a half years of hard work.
Sadly, his parents aren’t alive to share what is a high point on life’s journey but his children and other family members attended the graduation ceremony. “I’m really looking forward to the event, my daughter and son are going with me,” he said.
Asked about the lessons he’s learned through his studies and decades of paid and voluntary work, he said: “No matter what sort of problems a person has, human beings have a massive capacity to change but you have to have the right support and help, which has to be provided in a non-judgemental and compassionate manner.
“You can condemn behaviour, but not the person. You have to believe in the persons inherent worth and in their ability to bring about the change they need. Change is possible but people need the right support network in place.”