“If I want to drive to the beach and look out at the water I can do it, that might be simple to somebody else but to me it’s sheer freedom.” 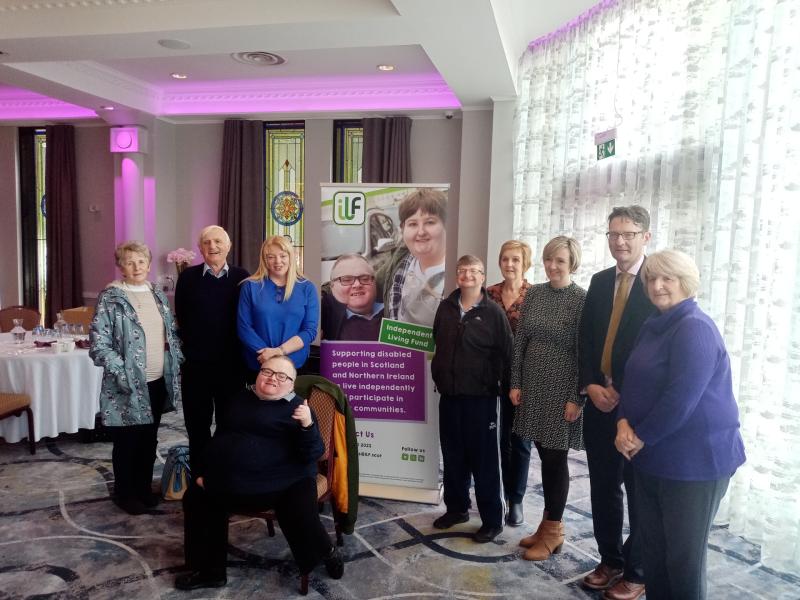 People living with severe disabilities attended an event in Derry this week at which they expressed their desire for the Independent Living Fund to be reopened to new applicants in Northern Ireland.
At Monday’s event in the Everglades Hotel, a Co-Production Strategy Event organised by ILF Scotland, users spoke of the “freedom” it affords them, the “choices” it allows them to make and the benefits of being able to live independently at home.
The event asked recipients of the Independent Living Fund in NI to let them know how they would like to see the organisation move forward over the next three years. It was the second of two such days in NI aimed at having the voice of its users included in the organisations strategic direction.
The Independent Living Fund was initially established through funding from central government in 1988.
It was set up as a national resource dedicated to support disabled people, enabling them to choose to live in the community rather than residential care. Thousands of people across the UK benefited from this initiative.
However the Government announced that closure of the original Fund would take place in 2015, amid protests from disabled people this went ahead in England and Wales but Scotland and Northern Ireland made different plans for the fund.
The Northern Ireland Government took the decision that recipients of the fund in Northern Ireland who used to receive funding from the ILF UK, would continue to receive funds administered through ILF Scotland.
ILF Scotland has therefore continued to provide funding for around 475 people in Northern Ireland since 1st July 2015.
Speaking to the Derry News at this week’s event, ILF Chief Executive Peter Scott said he was “very happy” with the feedback from users and carers. “We had a good turnout and people had strong opinions. It was good to hear what they think the future should hold for disabled folk here in Northern Ireland”.
“People recognised the value ILF brings to the lives of people who are disabled but they had concerns that because the fund closed to new applications nine years ago, there’s now quite a significant group of disabled people who aren’t able to get the benefits that others have from accessing the fund.
“People made it very clear that they’d like to see the fund opened up to new applications, so that’s what we’ll try and do.”

Those who can’t access that support at present get assistance through Health and Social Care Trusts who carry out an assessment to determine someone’s need and then decide which bits of that need they will meet.
ILF is designed to be a top-up providing additional support which allows users to have a more “meaningful life”, Mr Scott explained.
“It allows them to take part in their community, to engage, to be active citizens. People often describe the support they get through statutory services as a bed & breakfast type service, it helps them to go to bed, get up in the morning and to be fed and watered. So it gets them up.
“Most people would describe the ILF as giving them something to get up for, it gives them things over and above the basic care needs that they might have by allowing them to take part in the world.”
In April of this year there was an event held at Stormont where MLAs and senior civil servants heard personal stories of users and also from those who would like to access ILF support.
Permanent Secretary at the Department of Health, Richard Pengelly, vowed to undertake exploratory work examining the possibility of the ILF fund reopening in Northern Ireland, however, it will require ministerial sign-off.
“Hopefully at some point before long we’ll have a government and a health minister and they’ll look at the proposals we’ll put to them and say ‘yes’.
“If we get it reopened to applicants in Northern Ireland that would be a really, really significant advancement in terms of the rights of disabled people over here. It would go a long way to supporting people with complex disabilities to live as equal citizens in our society.” 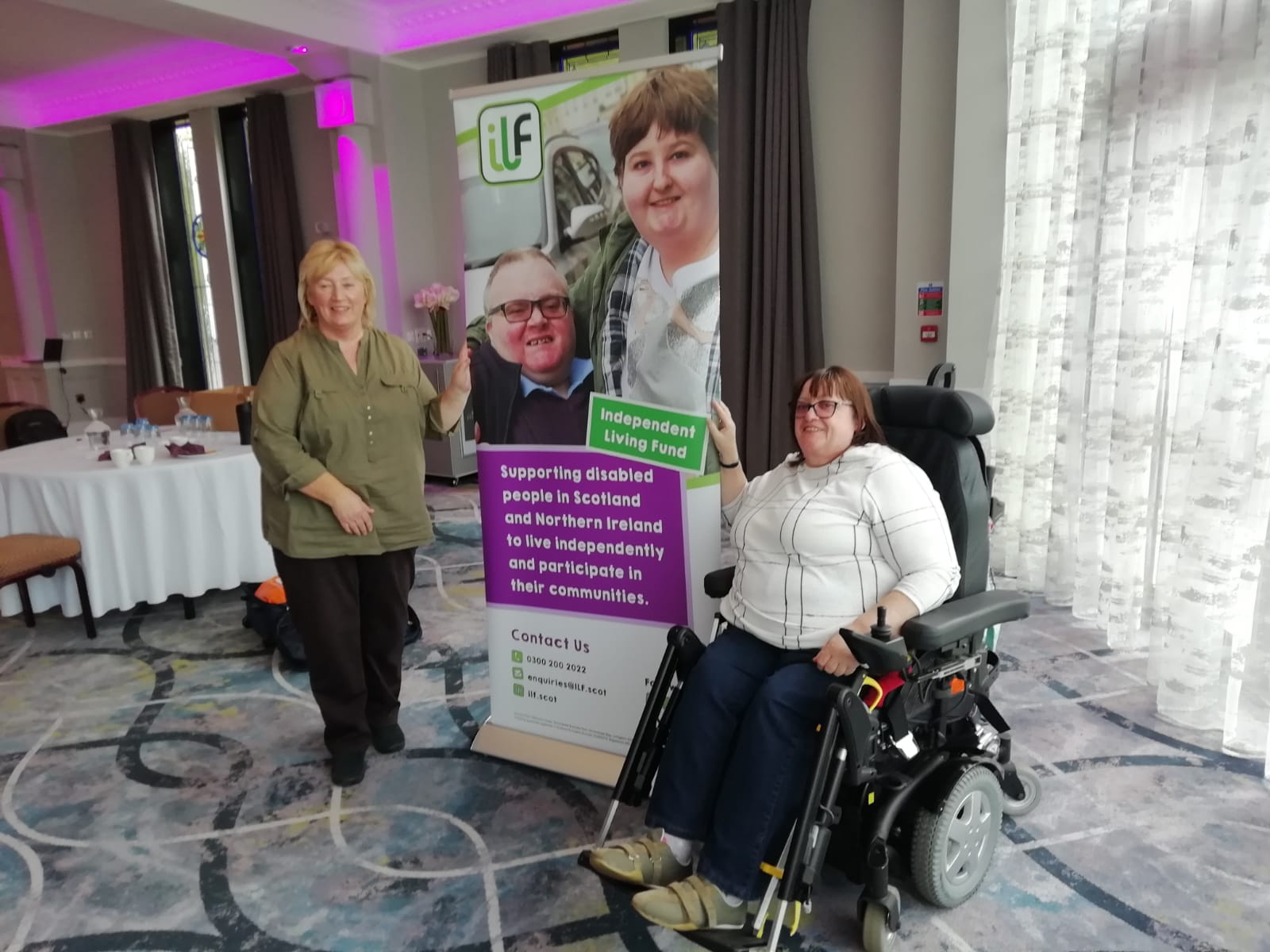 Service user, Helen McLaughlin, who has a severe physical disability is a wheelchair user and living independently in her own home states:
“It helped me get back to work and be independent in my bungalow. I have a car that I drive, and the ILF allows me to have a carer with me to go shopping and stay overnight with me otherwise I’d have to stay in a home.
“It has allowed me to live in my own home that I reared my children in.”
She added: “My future looks brighter now, I’m able to go out for my lunch, do a bit of shopping and come home again. It has given me a lot of independence.
“If I want to drive to the beach and look out at the water I can do it, that might be simple to somebody else but to me it’s sheer freedom.”
Meanwhile, Christine Bartlett, a carer for her two sisters, Valarie and Mandy McComb, said that her mother initially applied for the fund “It gave her a break so that she could go into the town and leave the carers with the two girls.
“I had another brother, the same as Valarie and Mandy, with severe learning difficulties but he passed away
“When he was very ill it was great that the carers were there and my mother was able to spend time with him.”
At the time funding was being taken away in England it caused “panic” for Christine. “I just saw that my two sisters would have to go into a home and I didn’t want that.
“There will possibly come a day some time down the line when they’ll have to because it’s likely they’ll outlive me but the fact they’re at home now, in their own environment, seeing the people they’re familiar with is a great comfort. If they were in a home I think they’d be forgotten about.”
She continued: “Last night we went for a McDonald’s, then went for a trip to Portrush for an ice-cream, they just love their wee outings. Carers would take them to the hairdressers too, it just allows them to do what everybody else does.
“It was very informative today. Going forward I would like to see it opened up to other people because I know how it has benefited my sisters and myself with them being able to stay at home.
“Especially young people who should have so much more to look forward to.”
People can access more information about the Independent Living Fund from their website.
Whilst there were a number of themes emerging from the day the overwhleming issue dominating the event was the want to see the ILF in Northern Ireland reopened.