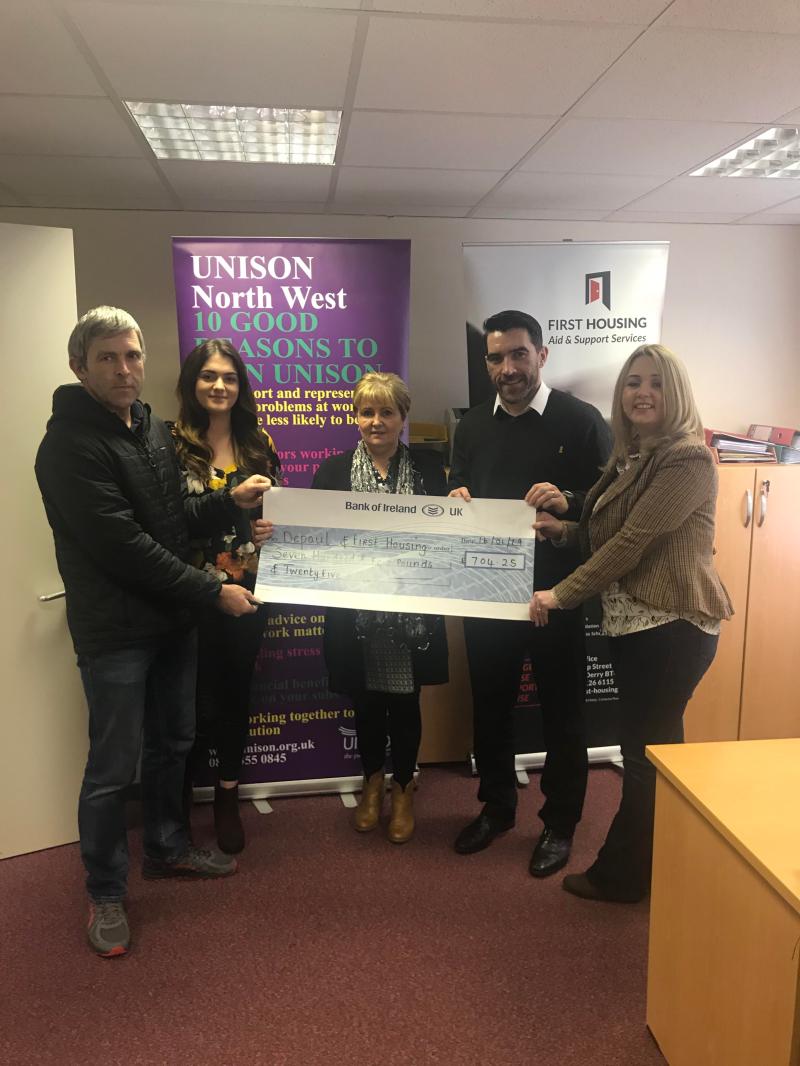 A local singer who wanted to teach her children the virtue of ‘kindness’ has presented a Derry homeless charity with funds raised from a public performance of Fairytale of New York in Guildhall Square before Christmas. Derry woman Ashleen Allen organised the event on December 23 to support the work of the De Paul group who run Foyle Haven and First Housing Aid in the town. She explained that the idea to perform the popular Christmas song made famous by The Pogues came about as she had been sitting playing it regularly in the run-up to Christmas. “Taking a few minutes to reflect thinking about all the people who are not as fortunate,” she said.  “Those without a home, family, food, heat, battling addictions and illness, feeling alone, isolated and helpless feeling like they can't face another minute never mind an hour a day.” Ms Allen wanted to lead by example by teaching her children about the value of kindness in a world where the overconsumption of technology has become an issue and life has become a ‘rat race’. “So many people face so much pain and hurt in their lives. Reminding myself how lucky I really am.  A roof over my head, oil in the tank, food in the cupboard and the warmth and love of my family. I wanted to do something to possibly make a very small difference and teach my children the real meaning not only of Christmas but how I'd hope they will live their lives “I feel our children are lost in the society we live in, consumed with technology always wanting more never having enough. I feel this is contributing to the epidemic of mental health issues and unfortunately contributing towards todays mental health issues and increasing suicide numbers. “We have lost our human touch…reaching out to those who need it…Always too busy.  Life has become a rat race!  I don't want this for my children and wanted to teach them that the greatest gifts are not "things" but an act of kindness no matter how small or giving your time is the greatest gift that you can give. “That material things are just that. Hopefully inspiring others to take time out to reflect and bring back the true meaning of Christmas.” Trade Unionist Niall McCarroll said that on behalf of UNISON, First Housing and Depaul “we would like to say a collective huge thank you to Ashleen for her wonderful fundraising idea, the money raised will undoubtedly help support the Foyle Haven and Night Support Services.” Photo: L-R Niall McCarroll UNISON, Saoirse Fanning UNISON, Eileen Best FHASS, Richard Stewartt DePaul, Ashleen Allen Organiser
ADVERTISEMENT
Advertise with Us
ADVERTISEMENT
Advertise with Us
ADVERTISEMENT
Advertise with Us
ADVERTISEMENT
Advertise with Us

The Graham Norton Show is back! Here's the guests for tonight's season premiere on BBC One