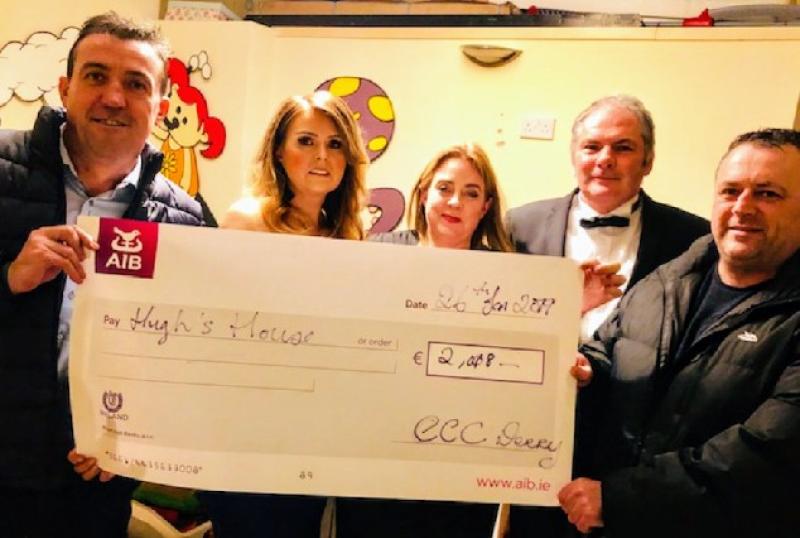 The Creggan Community Collective has donated money to a Dublin based charity which has been a ‘lifesaver’ for Derry parents with sick children. The grand total raised during a sponsored spin cycle of €2018 was presented to Hugh’s House at the weekend by Independent Councillors Gary Donnelly and Paul Gallagher. They became aware of the charity while assisting local families in the Derry and Strabane council area.  One of those families was Rachael Mooney and Kevin Lynch, whose baby, Hope Isabella, was born at 26 weeks weighing 520 grams. Hugh’s House, which provides a haven for families of sick children, was founded by Ade Stack after she lost her son, Hugh.  Sadly, Hugh lived for just eight months and for most of that time he was cared for in hospital. Through her own experience Ms Stack noticed families sleeping in waiting rooms, cars or having to travel long distances every day. She took it upon herself to establish Hugh’s House so that parents in the same situation would have a place for respite which also allows them to remain close to their child in its time of greatest need. Parents are allowed to stay at Hugh’s House free of charge. It is situated at Belvedere Pl, Mountjoy, in Dublin which is a short five-minute walk to Temple Street Children’s University Hospital and close to other hospitals in the city. Whilst at Hugh’s House, parents are also able to share their own experiences which helps build an important support network at what is a very distressing time. ‘Lifesaver’ Cllr Donnelly said the fundraising event at Creggan Community Collective on January 18 exceeded all expectations with people throughout the city supporting it.  The sponsored spin cycle covered 150 miles - the distance from Derry to Dublin. He commented: “We had a huge response, a lot of people took part in the cycle.  It was a 240km cycle and all sorts of people did shifts, organisations, women’s groups and we well exceeded what we expected. “There is still some money coming in, UNISON just donated £50 today and parent and toddler groups helped us out too.  When me and Paul Gallagher went down the Lord Mayor of Dublin was running a function for Hugh’s House and there was another gentleman.  We were lucky enough that we met Ade and Martin who took us a tour around. “And whilst we were there we actually met two families from Letterkenny, but there have been a number of families from the council district who have been using it over the last while that we know of.” Speaking about local families who have availed of the service, he added: “I know a family who was supported by Hugh’s House in recent weeks, the mother was rushed to hospital in Dublin because there were no beds in the north.  The father was upset and they were stranded in the middle of Dublin with no contacts and had to find somewhere to sleep. “So it was through that that we phoned Hugh’s House and they were very helpful.  They then go through a social worker and visit the people in hospital, and they were lucky that two rooms had become available at the time.  The father was moved in and then when the mother got out of hospital she was able to use it as a base from which to visit the baby in hospital on a daily basis. “We talked to one of the families from Letterkenny who have three other children and, they said to us, ‘without this service we don’t know what we would have done.’  If you put yourself in that position, the hotels in Dublin are expensive, a child can be in for weeks, months or even a year in some cases then you couldn’t survive, people have bills to pay – it’s a lifesaver for some people.” Photo: Cllr Paul Gallagher, Maria Kirby-Brennan (general manager Hugh’s House) Ade Stack, Martin Curley (parents of Hugh and founders of Hugh’s House) and Cllr Gary Donnelly.
ADVERTISEMENT - CONTINUE READING BELOW