Derry City Cemetery Series: How a master and his apprentice created some of Derry's most historic buildings 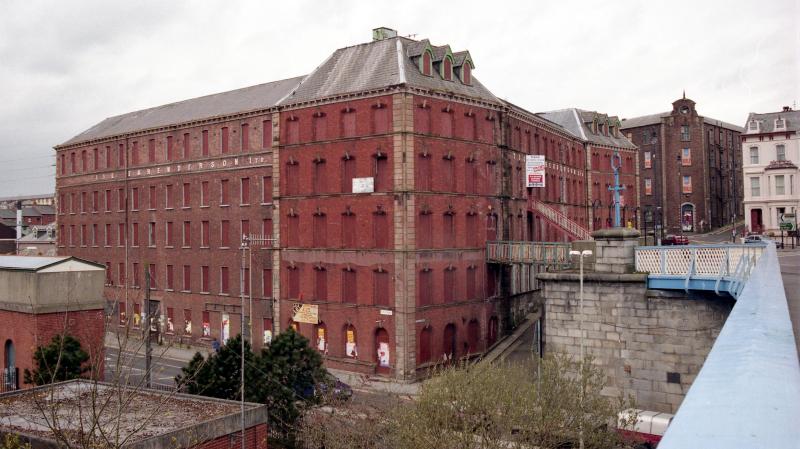 The name of architect John Guy Ferguson will be forever linked to many of Derry’s most spectacular and historic buildings.

Seven years later, in 1868 he was appointed as architect to the Church of Ireland diocese of Derry and Raphoe by which time he had established his own business on Shipquay Street. By 1875 the firm shifted to East Wall and by 1891 the company had shifted again to another premises on Pump Street.

John G Ferguson was the designer of many of the city's most recognisable landmarks that still stand to this day. His plans for the original Guildhall, St Columb's Cathedral Primary School, Welch Margetson Shirt Factory, Tillies and Hendersons the Commercial Buildings and St Augustine's Church on the city's walls have ensured that he left his unique imprint on the Derry's landscape.

However, it is perhaps for his design of the Apprentice Boys Memorial Hall that he is most remembered. Given the fact that Ferguson was born at Fountain Street on August 11 almost 200 years ago it is hardly surprising that he would eventually become Governor of that organisation.

The original part of the Memorial Hall on Magazine Street designed by Ferguson opened in 1877. The second section of the premises opened in 1937 extended the hall onto Society Street.

Ferguson is still noted in records held by the Apprentice Boys of Derry for being President of the organisations Walker Club. Papers from June 4, 1897 stated that he was in charge of the club and noted that it was the 53rd anniversary of its founding.

A photograph of John Guy Ferguson still hangs in the Walker Club room and he is credited with the fact that it had not been for him that it would have passed out of existence.

On December 14, 1870, Ferguson as Governor of the Apprentice Boys was instrumental in defying the city's authorities. A decision taken by Resident Magistrate Captain Keogh and several other local judges attempted to ban the annual burning of Lundy.

Ferguson was quoted as telling a gathering of the Apprentice Boys: "I now have to state that we will meet in this hall on Sunday at 11 o'clock-and I invite our fellow citizens to accompany us as we proceed from here, God willing, to attend Divine service at the Cathedral at 12 o'clock.

"I also have to state that we will meet here on the following day, Monday at one o'clock and  proceed with the celebration."

Attempts by the local constabulary were made to seize Lundy's effigy but he was successfully hidden and despite threats of force against the Apprentice Boys by the police and a lengthy stand-off to prevent it, Lundy was duly burned from the roof of the Memorial  Hall that Ferguson had designed. He was arrested but later released without charge.

By today's standards the age of 72 is not an immensely great lifespan. But when John Guy Ferguson passed away in 1901 a small entry in the magazine the Irish Builder said that he had died "at a very advanced age."

The obituary also mentioned that Ferguson had been a "prominent Freemason and Orangeman". In keeping with his culture and roots, in 1902 the Apprentice Boys placed a mural tablet to Ferguson's memory at the entrance to the Memorial Hall which had been erected to his designs.

Ferguson was married to Catherine Hassard Ferguson who died around 14 years before him in 1888. One of the couple's son's, Robert Hassard Ferguson died at the age of just 24 in 1882 almost 20 years before his father. All three are buried in the one grave in Derry City Cemetery. The city's burial records show that the plot number is Ea4 in the Victorian and Edwardian Protestant section.

John Guy Ferguson's iconic contributions to the built heritage of Derry are chiefly associated with the Protestant and Unionist community and he handed those traditions onto another son, also called John who joined him in the firm in 1895.

However, it was one of his Ferguson's architectural proteges that made an equally significant contribution to buildings mainly associated with the Catholic community in Derry.

Edward J Toye was born in 1857 at Aghadowey in County Derry. Records show that he was educated by the Christian Brothers in Derry and also under private tutors. As a trainee architect, between 1874-77 he was articled to Charles Edward Stewart in Derry. Between 1877-1883 he served as an assistant to John Guy Ferguson.

By 1885 he had set up his own practice in Derry and between then and 1889 he was in partnership with James Croom who was once also a pupil of John Guy Ferguson. Croom had formed a practice with a William McElwee. The McElwee & Croom business was located at Shipquay Street in 1885 before he became linked with Edward Toye. John Croom died in 1891.

Toye's practice was noted as being a busy one in which his work, like that of his teacher Ferguson, was dominated by projects for the clergy. For example he was responsible for work on Catholic churches such as those at Gortin, Ardara and Bruckless.

Unlike his former architectural tutor, Toye was laid to rest in his native Aghadowey. However, although they were separated by religious denomination and are buried many miles apart the legacy of John Guy Ferguson and Edward J Toye lives on all over the streets of Derry.