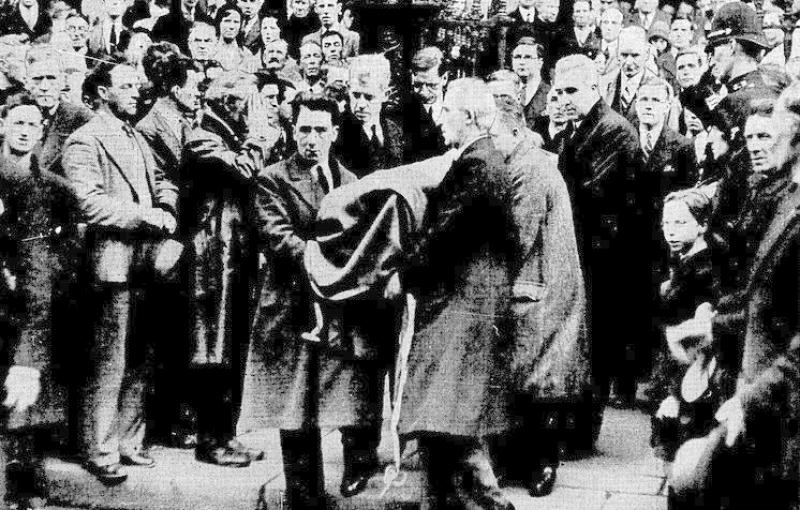 Frank Carney was born in Enniskillen, married a Derry girl and lies buried in Derry City Cemetery.  But, before his death at the age of just 36 he had served as Fianna Fail TD for Donegal.

There is nothing in itself overly remarkable in the fact that Carney won an election. However, prior to the summer of 1922 Frank Carney was a pro-treaty advocate and a trusted aide of Michael Collins. Yet, as his remains were lifted into a Dublin church in 1932 it was  Eamon de Valera  who helped carry his coffin.

When on January 21, 1919 the First Dail sat in Dublin following the landslide victory for Sinn Fein in the General Election of December 1918, the die was cast for the resumption of hostilities between republicans and Britain.

The ensuing bloody and bitter Irish War of Independence of course led to the partition of the island, the creation of Northern Ireland and decades of party political rancour in the south between the factions that were for and against the Anglo-Irish Treaty.

Frank Carney’s connection to Derry and its Donegal hinterland began in 1920. On March 27 that year, the young IRA man was arrested by British forces in his native Enniskillen and transported to Derry Jail.

Contemporary newspaper reports reveal that the captured republicans arrived in the city under both military and police escort and were brought to the Bishop Street prison by “motor lorries”.

On their journey to incarceration we are told they sang ‘The Soldiers Song’ and were cheered by republican sympathisers as the entrance of the prison.

The arrival of Carney and his fellow prisoners swelled the number of republicans being detained in Derry to more than 80, so after just three weeks there Carney was transported to Belfast Jail with other prisoners from Tyrone, Donegal and Fermanagh.

Soon after their arrival in Belfast the republicans took a decision to go on hunger strike with the primary demand that they would be released. But, after just a few days of the strike, Frank Carney became seriously ill and was taken to the Mater Hospital.

Upon his recovery Carney was released and within days he was again taking part in IRA activities.

The future TD for Donegal, was born on April 25, 1896 and fought for the British Army in World War I as part of the Royal Inniskilling Fusilliers. Frank Carney would go on to join the IRA and fight in both the Irish War of Independence and the Irish Civil War.

Little is still known about Frank Carney’s decision to join the republican movement. But, what is clear is that by 1918 he was devoting all of his energy to it. By the end of that year he had built the Irish Volunteers in Fermanagh into a fighting force with eight fully staffed companies.

Also, by the age of 22 Frank Carney had been appointed to the position of commandant, and was in charge of the IRA across Fermanagh. It also appears that he was a trusted and close confidante of Michael Collins.

A brief insight into Carney’s IRA activities came in 1927 when he successfully stood for election to the Dail to represent Donegal. A letter to a newspaper in the run-up to the election cast doubt on his republican credentials, stating that it was impossible he had been in the movement since 1916 because he had still been fighting for the British Army.

Rebuffing the accusations Carney wrote: “Not only was I connected with the Volunteers in 1916, but I was actually a volunteer in December 1915 as my service in the British Army terminated earlier that month.

“In Easter Week, 1916, I was one of those Volunteers who were to march to Galway to receive the arms from Roger Casement, my commanding officer at that time being Professor Frank O’Duffy, now Secretary to the Minister of Education.”

Records show that in 1915 O’Duffy had reorganised a small company of the Irish Volunteers in Enniskillen. However, after the Easter Rising the company had begun to dwindle away as Frank O’Duffy found his focus shifting.

He said: “When Sinn Fein began to spread as a movement, I devoted most of my time to its organisation, as it was evident that the most urgent need at that time in Fermanagh was sound national propaganda.”

In fact, it was a similar story all over the North. The few Irish Volunteer groups that existed had little leadership and were virtually dormant in terms of armed action. Their main task, as said, was to aid the development of Sinn Fein.

It was British Prime Minister Llyod George who unintentionally brought new impetus to the Irish Volunteers in early 1918. His proposal to introduce conscription to Ireland to help the British war effort was ratified at Westminster in the April of the last year of WWI.

The reaction in Ireland was immediate. Protests against the idea sprang up across the island and membership of the Irish Volunteers increased almost everywhere.

In Fermanagh, Frank Carney trained the new recruits using what he’d learned in the Inniskillings. And, it was these efforts that brought Carney to the attention of Michael Collins.

Collins from mid-1917 was Director of Organisation for the Irish Volunteers and his plan was to take the network of local groups and transform them into a national force.

The ‘Big Fellow’ as he was known, insisted on weapons and tactical training, the sourcing of arms and full-scale administration. Collins compiled lists of officers and weapons available to him and carefully drew up a detailed picture of the set-up across the entire country.

Michael Collins also insisted on working personally with each of his commanders, especially through the Irish Republican Brotherhood (IRB). The leadership of the secret, oath-bound body met at conventions in Dublin where all the leaders came together after meeting Collins face-to-face.

It was through these meetings that Collins would have learned of the capabilities of the young Frank Carney and it was to Michael Collins that Commandant Carney would have answered directly to in terms of both the Irish Volunteers and the IRB.

It was a relationship however that would eventually fracture in the heat of the Irish Civil War.

Elected at his first attempt in 1927 and remaining until his death in 1932, Frank Carney served as Fianna Fail TD for County Donegal.

But, in the wake of the Irish Civil War and the victory of the pro-treaty forces, Carney had been appointed as one of the chief supplies officer’s for the Irish Army.

So, where and when did the switch to support for Eamon de Valera’s anti-treaty political party happen?

The answer is this.

During the Civil War on June 28, 1922 at Portobello Barracks in Dublin, Michael Collins was busy in the process of gathering troops and armaments for an assault on the city’s Four Courts that had been taken over by the anti-treaty IRA.

As supplies officer Frank Carney was ordered to hand over weapons and other materials to be used in the upcoming attack. About to obey the order, Carney realised that the man getting ready to take the supplies away was a British Army officer at the Phoenix Park Depot.

It was then that it became clear that Collins’ assault on the Four Courts was part of an alliance with British forces. Carney promptly refused to comply with the order and resigned from his job. Several more men under Carney’s command also quit and all of them were placed under arrest.

It was an action that his former comrades in the anti-treaty republican forces did not forget a decade later when Carney died suddenly of a heart attack in Dublin.

The day after Frank Carney’s death on October 20, 1932 Eamon de Valera and other members of the Executive Council of Dail Eireann carried his tricolour-draped coffin into St Andrew’s Church on Amien Street.

The church was crammed with dignitaries that included every member of the Irish Government benches and many members of the opposition as well.

Representatives of Fianna Fail and the IRA from all over Ireland were also present in the church with Dublin IRA providing a guard of honour who duly stood to attention around the coffin.

Despite the fact that Frank Carney’s exploits in action were and still remain largely unknown, it became clear at St Andrew’s Church that many people knew exactly who he was.

The Dublin newspapers reported that an ‘immense concourse’ took part in the cortege that went with the horse-drawn carriage, led by pipe bands to Amien Street Station.

From there, a train packed with floral tributes carried Frank Carney’s remains to Derry, stopping along the route to pick up more wreaths at Omagh and Strabane.

At Derry the train was met by thousands of people who formed a cortege, which was again headed by pipe bands. A hundred of Frank Carney’s old IRA comrades marched behind the hearse and took turns carrying the coffin for a few yards each.

The bitterness of the Civil War in Ireland was still very much in evidence, but personalities from each side set aside their differences, at least for a few hours, to accompany one of their former leader’s to his home at Westland Villas.

The street was also guarded on each side by members of the Royal Ulster Constabulary. Just a few years earlier, Frank Carney had been their dedicated enemy and a figure they would have gladly seen either dead or back in jail. But, reports from the time say that the policemen raised their hands to salute as the funeral procession passed by.

It was also reported that the funeral was one of the largest ever witnessed in the city. Twenty-five Catholic clergymen presided at the Requiem Mass at St Eugene’s Cathedral. All this was remarkable for a Fermanagh man who had spent just a little of his short life in Derry.  Still, dignitaries from the religious, social and political life of the city all turned out to attend his funeral.

Speaking to the huge crowd O’Kelly said: “If we would honour a man worthy of honour, let those of us who cherish true Irish ideals and honour patriots of our nation, best do so by trying to emulate men like Frank Carney, his courage and sacrifice.”